The Talking Heads' 1984 concert film "Stop Making Sense" gets the spoof treatment by the IFC series on Oct. 12. 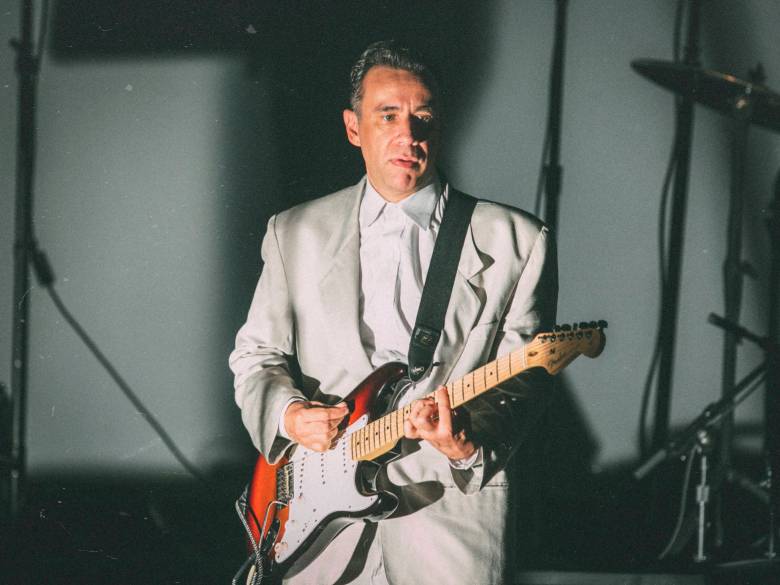 On a sunny July day, I traveled east of Los Angeles proper to the San Gabriel Mission Playhouse, while Talking Heads lyrics ran through my head. IFC’s “Documentary Now!” was shooting a parody of the band’s iconic film “Stop Making Sense,” and invited fans and reporters to don their best ‘80s attire and be the live audience for their spoof concert film.

Directed by Jonathan Demme, “Stop Making Sense” was released in 1984 and has been touted as one of the greatest concert films of all time. Lead singer David Byrne’s big white suit, the on-stage minimalism, the driving setlist and special guest performers had a cumulative effect of creating an eclectic yet energetic narrative. Watch a trailer for the film below:

“Fred [Armisen] really wanted to do a band of this era, a New Wave band,’” Mulaney told IndieWire. “We definitely wanted to do a music one, especially after ‘Blue Jean Committee’ from last season. Bill brought up the idea of ‘Stop Making Sense’  and how they keep adding elements, and could we do a concert where we have that to the nth degree, just a ton of elements being added. From there, Fred and another producer named Erik Kenward, all of us had worked together on ‘Saturday Night Live,’ and Fred’s music supervisor Jon [Spurney] they wrote all of these songs.” The concept of playing a whole concert in front of the cameras, all the way through, appealed especially to Armisen. But that ambition had created a bit of anxiety with Hader, who had only learned the songs two days before.

“We haven’t done [a run-through],” Hader admitted. “That’s why we’re all a little nervous. Everyone is backstage flipping out because we haven’t done it. There hasn’t been enough time. [laughs]”

Concert time arrived all too soon, and those crucial first moments would set the tone for the entire show. Check out the first number in “Stop Making Sense” to get an idea of just what “Documentary Now!” had to live up to:

Armisen and crew absolutely killed it. Although he had written an original song, everything else about their interpretation was eerily like Byrne’s “Psycho Killer” opening performance: the white suit, addressing the audience, placing a device on the stage, the energy and the wild, staggering steps.

It was magic and it was enough. The remainder of the 10-song concert wasn’t as much of a parody, but that’s because it didn’t need to be after that loving tribute.

For Armisen, mimicking Byrne didn’t require any additional studying or research. “It’s in my bones,” he told IndieWire. “I’ve seen [the film] so many millions of times that I know what it is. I’ve always and still do wish to become David Byrne.

“That is how you build a discography. You start with those roots of the original band, you strip everything down,” he said. “I love the way they looked; nobody had long, crazy hair. It was all about the simplicity and singing about things at a time when most rock lyrics were about mountaintops and stuff. This was very much about streets and bicycles and things like that. And then bringing in Brian Eno, being inspired by African music — all of these things, having Bernie Worrell on keyboards and Adrian Belew and Robert Fripp. It’s such a great way to build things.” Like Talking Heads’ music, the songs Armisen wrote cover a wide range of styles beyond just New Wave. “There’s one that we wrote last minute because we did it to resemble the Talking Heads with all of these lyrics and stuff, and then I thought, ‘We don’t have one that’s just like a full-on dance song all the way through with everyone playing really frantically, really driving,’” he said. “And so a couple days before, we wrote one called ‘I’m Alert.’ It’s basically one chord, a couple chords, one beat all the way through, and I’m really glad we did it because it needed that center like we are a dance band. Everyone’s doing solos and everyone’s jumping around.”

The musical performance aspect is also old hat for Armisen, who also acts as bandleader to the house band on “Late Night with Seth Meyers.” “I’ve played music in bands most of my life,” he said. “My whole 20s was being in bands, coming up with a setlist, playing an instrument. That’s all I did. That part of it is actually super easy for me.”

The logistics of filming a concert film, however, were a different story. “When you see it in a movie, it looks so easy, but when we were actually doing it, there’s the issue of moving out of the way, things rolling on and rolling off. Much more difficult than I imagined that part,” he said.

Meanwhile, Hader was too busy focusing on playing the music to act or pay attention. “It’s funny because I keep concentrating on my bass part and it isn’t until we’re on television or I’m watching it back that I hear the lyrics and how silly the songs are really hit me,” he said.

While getting the concert parody part right was essential, “Documentary Now!” added its own twist by giving the band a backstory: The members of the art rock group Test Pattern have a history, and after many years have decided to do one farewell concert. That’s why the title of the fake doc is “Final Transmission.”

“I’m Marky. He’s the bass player in [the band] Test Pattern,” Hader said. “He has a lot of big ideas but he’s been kind of marginalized by Fred’s character, Lee, who is kind of the artistic genius behind the band. We went to art school together.”

That’s why the first song is called “[Art + Student = Poor,]” a song that they performed on “Late Night with Seth Meyers.” Watch the performance:

Maya Rudolph, who had flown in the night before and had to quickly learn the handful of songs to which she’d add her vocals, also plays someone with a bit of history with Marky and Lee. Take a look: If Armisen had his way, there wouldn’t be any backstory in the film except for the hints gleaned from the band’s comments on stage or through the lyrics. At the time of the interview, the actor hadn’t seen the final cut of the film and therefore didn’t know whether or not fake interviews that the band had filmed would be used. “We did some, but I hope we don’t use it,” he said. “My hope because it’s not edited yet is that it’s all concert footage.”

It’s understandable why Armisen would want to be a purist about keeping the documentary contained to the concert. As a lifelong fan of Talking Heads, he has strong feelings about the entire ethos of the band.

Exactly how much did the band’s music mean to the actor?