The John Krasinski-directed live reading had plenty of surprises in store for its NYC crowd. 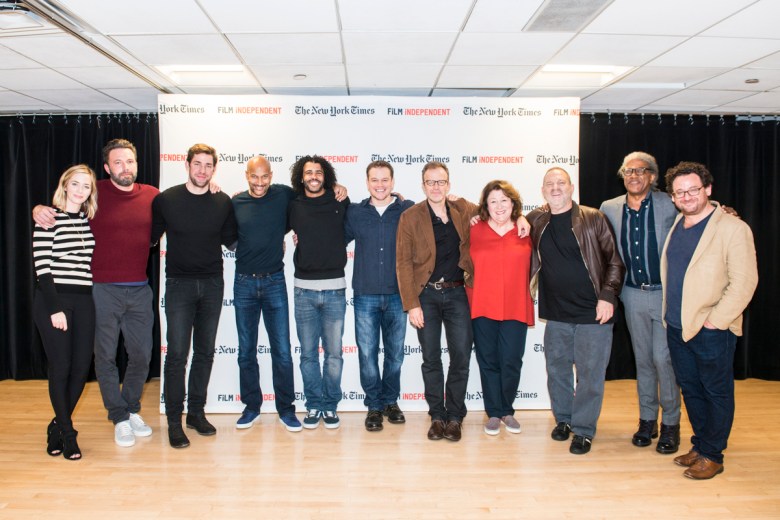 It’s hard not to get a real appreciation for a script when it’s presented by itself without much in the way of visual accompaniment. There is so much in the dialogue that can be missed with all the distractions of the screen. Such is the idea behind Live Read NY, presented by Film Independent and The New York Times.

This weekend’s live reading of the original “Good Will Hunting” script was truly a unique experience that brought the audience into Boston circa 1997 simply through the spoken word. Aside from the performance itself, the setup was perfectly executed, with plenty of surprises in store for the crowd.

As director John Krasinski was introduced, the audience greeted him with a standing ovation. Krasinski explained to an enthralled crowd just how much the film meant to him as someone from Boston, saying “As a kid from Boston, I think we all get tattoos of the poster of this movie on your back.”

READ MORE: How Olivia Wilde Used Her Star-Studded ‘Hannah And Her Sisters’ To Reintroduce NYC To The Live Read

It appeared as though just his presence would have been enough. However, as he began to announce the cast, the audience suddenly realized that they were in for something much more. Krasinski first introduced a friend of his, local actor Dave Shalansky. The cast of the “Good Will Hunting” Live Read

He was followed by Keegan-Michael Key, who played Billy and bit parts here and there (many of which showcased his talent for accents). Key was followed by “Hamilton” star Daveed Diggs, who played Morgan (originally portrayed by Casey Affleck). “Spotlight” director Todd McCarthy played Professor Lambeau. Next up was Krasinski’s own wife, Emily Blunt, who took on the role of Skylar. This was its own surprise, though Krasinski had previously announced that she would be in the production, though it was unclear what part she would play.

“The Americans” star Margo Martindale — and the standout star from Krasinski’s recent directorial outing, “The Hollars” — had the very big shoes of Robin Williams to fill, playing Dr. Sean Maguire. Krasinski said he had to give to a woman because “no man can ever do what Williams did.”

Krasinski informed the crowd that he had the honor of voicing Will Hunting and began to take the seat marked as such. But before he could sit down, Matt Damon took the stage and told him otherwise. The stunned crowd gave him a rousing hand. Krasinski then stated that he would voice Chuckie instead, at which point Ben Affleck emerged on stage and told him that wasn’t going to happen. Krasinski was relegated to the part of narrator, a role he was more than happy to take on, considering his company. Krasinski was hardly kept out of the loop in this role. He even jumped out his seat with excitement on Damon’s famous line, “How do you like them apples?”

Damon and Affleck didn’t skip a beat either. Every line they delivered seemed genuine. Affleck, however, stole the show with his gleefully over-the-top Chuckie.

Some of the best moments occurred when the actors went off-script. Such as Krasinski, when reading the stage directions, interjecting that Will and Skylar “don’t kiss,” then asking Blunt, “You’re really going to take Jason Bourne over Jim from ‘The Office’?” Or Damon’s explanation of a reference to O.J. Simpson driver AC Cowlings: “That’s a ’90s joke.” The reading used the shooting script and contained some scenes that didn’t make it into the film. One featured Affleck’s character telling an anecdote about a friend of his who hits a cat with his car and then attempts to put the cat out of its misery, only to discover that he has killed a different cat altogether. After reading this monologue, Affleck remarked, “that one should have made it in.”

The shooting script also contained some jokes within the stage directions that Affleck and Damon had snuck in, like “Skylar looks at Will the Robot Pimp.” Krasinski had a good time reading that one. The reading, like the film, also balanced the funny moments with the poignant ones. Martindale choked up on a more than a few occasions when reading William’s lines.

Who could blame her on a night like that?