The creator of "Arrested Development" spoke about pitching ideas to TV networks and studios at a special keynote event. 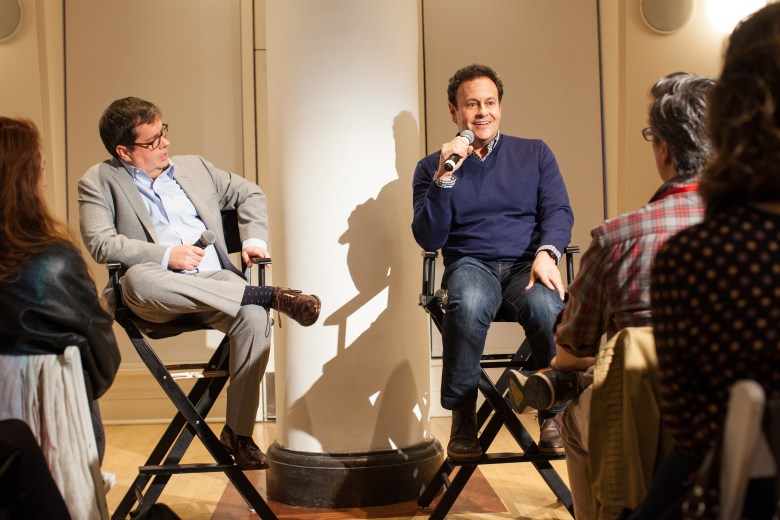 What does Mitch Hurwitz, three-time Emmy-winner and the creator of “Arrested Development” have to say about pitching a TV show? It’s all about making them laugh.

At the New York Television Festival, Hurwitz discussed his process of pitching story ideas to networks and how he’s navigated the ever-evolving world of TV, and how to sell a show. At the a keynote event on Tuesday, Hurwitz recalled his career in television from the early days of rewriting “Cheers” scripts to getting “Arrested Development” on air.

“One of my interests was to get laughs,” he explained when discussing his pitch for “Arrested Development.” Hurwitz focused not as much on the overarching story, but rather what made these characters fun to watch. “You can get a lot done if they’re laughing. You can take Trump down if they’re laughing.”

Hurwitz went into how to prepare yourself for pitching an idea and how to make yourself stand out in a sea of other TV-hopefuls. He mentioned the importance of creating a distinction from those around you, even if it’s a simple as wearing a suit to work even when the official dress code is casual.

“There is a lot to be said for the general notion of creating a mismatch,” he said. “Sometimes it just means going creatively where other people aren’t going.”

Because the world of television has become so much more complex and diverse in recent years,Hurwitz noted that the impulse for many is to simply imitate the people who have succeeded. But, he said, “it always comes down to the more you have the confidence in your own path, the more you’ll get attention.” Hurwitz has been working with Netflix ever since the streaming company picked up a fourth season of “Arrested Development,” seven years after it was cancelled by Fox. In addition to other projects he’s been working with the company,Hurwitz commented on the nature of Netflix itself and how it’s changed the way people create television.

“If you go to Netflix, you’re making a choice, and as a result, you’re paying attention,” he said. “Once you’ve got their attention, you have to evolve the form.” He then explained that the way today’s audiences are watching television has changed how shows are being written, produced, and even marketed.

Towards the end, members of the audience (many of whom were pitching their own ideas to networks at the festival) were invited to ask questions about pitching projects. Hurwitz reemphasized the importance of having confidence in your ideas, as well as having the patience to stick it out, despite any discouragement you might encounter along the way.

“You’re in line. And a lot of people get pulled out early, but the line’s moving up. It’ll get to you, if you stick around,” he said. “For people that just stay with it, you’ll get there.”

The New York Television Festival runs from October 24-29 at various locations across New York City. NYTVF seeks to seeks to connect artists with studios, agencies, and production companies to create and showcase the best in emerging television programming. Click here for more information about the festival.