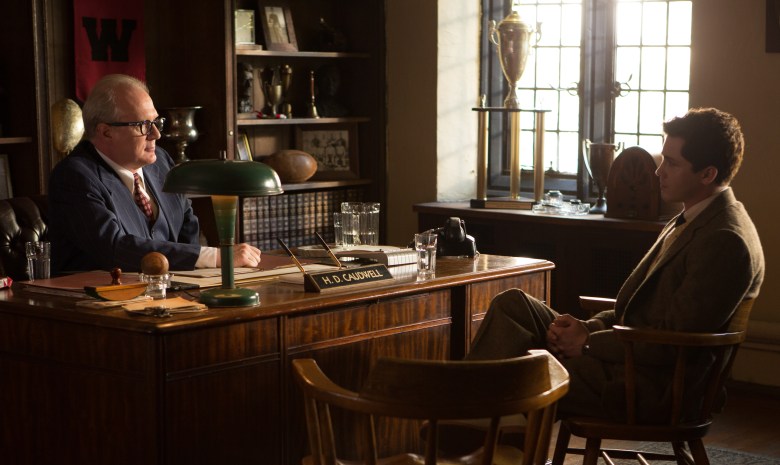 This year, there have been two major Philip Roth film adaptations, both of which were directorial debuts: Ewan McGregor’s poorly received “American Pastoral” and James Schamus’ “Indignation,” which was better received by critics. Based on Roth’s 2008 novel, the film follows Marcus (Logan Lerman), an intelligent working-class Jewish student from New Jersey who attends a small, conservative college in Ohio.

While at school, he experiences a sexual awakening after meeting the beautiful Olivia (Sarah Gadon), but their love affair sparks disastrous consequences. Watch an exclusive behind-the-scenes clip from the film’s home video release below, which delves deep into the film’s acclaimed centerpiece scene between Marcus and the college’s Dean Caudwell (Tracy Letts).

Schamus is best known as a producer and writer for some of the most acclaimed films of the last two decades. He wrote or co-wrote many of Ang Lee’s films, like “The Ice Storm,” “Crouching Tiger, Hidden Dragon” and “Lust, Caution.” He was nominated for an Oscar for producing Lee’s “Brokeback Mountain.” He also served as the CEO of Focus Features until November of 2014 where he oversaw the production and distribution of films like “Lost in Translation,” “Eternal Sunshine of the Spotless Mind” and more.

“Indignation” premiered at this year’s Sundance Film Festival. It is available on Digital now and will be available on Blu-ray and DVD on November 8. The Blu-ray and DVD releases include two all-new featurettes: “Perceptions: Bringing Philip Roth to the Screen” which features interviews with the cast on the film’s themes and their resonance today, and “Timeless: Connecting the Past to the Present,” which takes viewers behind the scenes of the film.