The third time is not the charm for many critics. 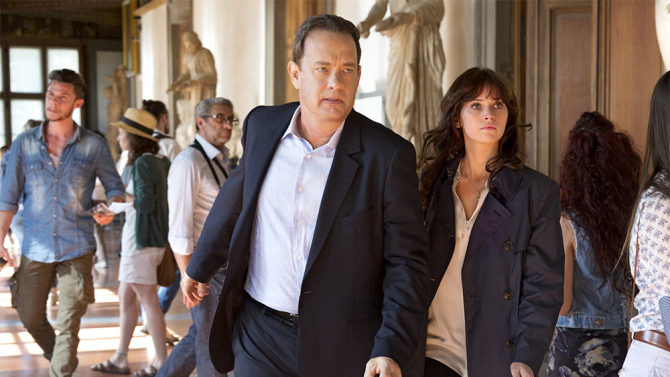 Tom Hanks once again reprises his role as Robert Langdon in “Inferno,” the third cinematic adaptation of Dan Brown’s book series. This time around Langdon teams up with Dr. Sienna Brooks (Felicity Jones) after he wakes up in an Italian hospital with amnesia. Together they race across Europe against the clock to foil a deadly global plot. The first reviews are in, let’s see what the critics are saying.

IndieWire’s Demetrios Matheou said the “third time’s not the charm” and gave the film a C- in his review.

“After ‘The Da Vinci Code’ and ‘Angels & Demons,’ ‘Inferno’ makes it three duds in a row. Thanks to Tom Hanks, Langdon is a palpable, enjoyable presence. But once again Ron Howard and his screenwriters have failed to satisfactorily adapt the material around him. If the first film was ploddingly, airlessly faithful to its source, this follows the second in being frantically paced, chaotic and increasingly exasperating.”

Variety’s Guy Lodge seemed to think along the same lines:

“If you found the first two films soulless and joyless, they imply, prepare for things to have gotten a little bit worse this time. And so it largely proves in the latest installment of perennially endangered symbologist Robert Langdon’s cryptic-lite adventures. As the addled professor dashes around Europe trying to prevent a humanity-culling plague cooked up by a Dante-spouting madman, the film more or less goes through the popcorn motions, but with less technical finesse (and even less mischievous irony) than one might expect from the Howard imprint.”

Jason Solomons of The Wrap wasn’t a fan of the film:

“Not scary, not funny, lazily-scripted, bafflingly plotted, devoid of tension and lacking any semblance of character development (not even good ol’ Tom Hanks can do anything interesting with Langdon’s self-absorbed pomposity), “Inferno” is stuck in a cinematic limbo, neither here nor there, not bad enough to be entertaining, but not good enough to admit how terrible it really is. If, as has occasionally been said, film critics reside in the eighth circle of hell, then Ron Howard‘s ‘Inferno’ must be what’s screening in Purgatory.”

“Purgatorio is maybe closer to it – something bad is happening, not the full Inferno, but it could be the gateway to the Paradiso of this fantastically boring film actually coming to an end. After 121 theologically unfathomable minutes. And after the dumbest and most anti-climactic ‘oh-my-God-I-can’t-get-a-signal-on-my-cellphone’ moment in film history. There’s a lot of people frowning, running about in tourist locations, frowning, driving cars, firing guns, talking on the phone, frowning, but at the end the block is stubbornly unbusted.”

Helen O’hara of Empire gave the movie two out of five stars.

“It’s not the worst of the trilogy, but this is less for fans of thrillers and more for people who are pining after last year’s holiday to Florence.”

READ MORE: ‘Sully’ Director Clint Eastwood and Tom Hanks on the Challenge of Recreating the ‘Miracle on the Hudson’

On a somewhat more positive note, Leslie Felperin of The Hollywood Reporter’s bottom line was: “Not as hellish as one might expect.”

“This adds up to arguably the best in the franchise so far. Admittedly, that’s not a high bar to jump, but ‘Inferno’ should reserve a place in the paradise of year-end high earners…Critics in various media may love to sneer at the whole Dan Brown phenomenon […] But when you throw in the likable everyman Hanks as the acting meat, a pretty co-star cheese slice, and that musical special sauce that Hans Zimmer specializes in, it’s not hard to see why viewers eat this stuff up.”

“Inferno” arrives in theaters on October 28.