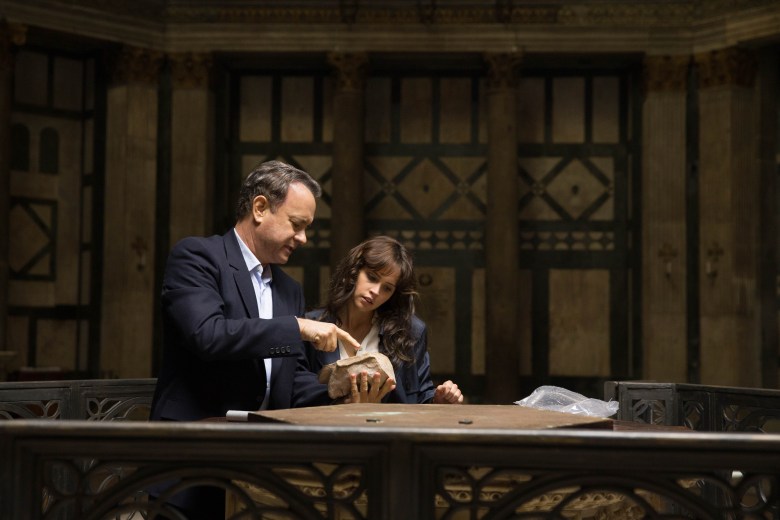 Whatever you might say about the quality of novelist Dan Brown’s writing, he’s created a terrific character in symbolist sleuth Robert Langdon – an indomitable, if reluctant hero, a Jack Ryan spliced with Umberto Eco’s William of Baskerville. And with adventures that combine mystery, cerebral riddle-solving and globe-trotting action adventure, surely it’s impossible to go wrong when bringing Langdon to the screen. Well, actually, no, it’s entirely possible.

In fact, after “The Da Vinci Code” and “Angels & Demons,” “Inferno” makes it three duds in a row. Thanks to Tom Hanks, Langdon is a palpable, enjoyable presence. But once again Ron Howard and his screenwriters have failed to satisfactorily adapt the material around him. If the first film was ploddingly, airlessly faithful to its source, this follows the second in being frantically paced, chaotic and increasingly exasperating.

Brown has upped the stakes considerably. Whereas the earlier stories dealt with threats to the Catholic Church, this time the whole world is at risk, literally, as a mad bioengineer (Ben Foster) has decided to tackle over-population by unleashing a plague that will kill billions.

None of this is known to Langdon when he awakes in a hospital in Florence, with a gunshot wound and short-term amnesia, and an assassin shooting up the corridor towards him. A rather over-familiar doctor, Sienna Brooks (Felicity Jones), helps him escape. Like every one of the prof’s helpers, she’s a beautiful, super-smart and much younger brunette, who is able to keep up with his arcane chatter – which is probably more than can be said for most of the audience. That’s very much the point of the Langdon sidekick, to do the sage nodding that we are unable to do ourselves. And though he takes a while to remember the words for “coffee”and “tea,” Langdon – with the help of a cylinder he finds in his pocket – identifies a trail of clues predicated on Dante’s “Inferno”, which will lead him towards the virus.

To be fair, Howard and his regular Brown cinematographer Salvatore Totino start the film with a lot more vim than the previous instalments – segueing in appropriately discomforting manner between Langdon’s hellish hallucinatory visions and the blurry, jarring incoherence of his injured state. And once he’s on his feet and moving through Florence, then Venice and onto Istanbul, there’s an appealing lustre to the camerawork. Those early scenes also enjoy some good chemistry between Hanks (typically willing to wallow in milky helplessness) and Jones, who suggests some of the spunky allure that we can expect in the upcoming “Rogue One.”

But once the so-called mystery is underway, it quickly buckles beneath the same old mistakes: Too much rushed dialogue (all that potentially enjoyable deduction lost), too much running around, too many secret passages all too conveniently located. Howard and writer David Koepp fail to convey the singular characteristic of the stories, namely the fun of problem solving. There is so much huff and puff that one is exhausted, but without an iota of intellectual satisfaction.

What’s particularly striking here is that the trail of Dante-inspired clues quickly plays second fiddle to the more prosaic thriller question: who can you trust? Sidse Babett Knudsen, Irrfan Khan, Omar Sy and Jones herself all give the poor prof far too much to think about.

I mentioned William of Baskerville. Ever since this series began I’ve thought about “The Name of the Rose,” Jean-Jacques Arnaud’s 1986 adaptation of Eco’s dazzling medieval murder mystery, with an array of texts and clues not so far removed from Brown’s (though infinitely better expressed). With Sean Connery excelling as a Franciscan Sherlock Holmes, investigating the murder of monks in a secluded monastery, the film has intelligence, character and such atmosphere that you feel you can smell sackcloth and mediaeval stench.

If only “Inferno” had a fraction of its uniqueness.