At a fan event, Corden also laughs about running into artists who said "no" to Carpool Karaoke early on – and are now begging to do it. 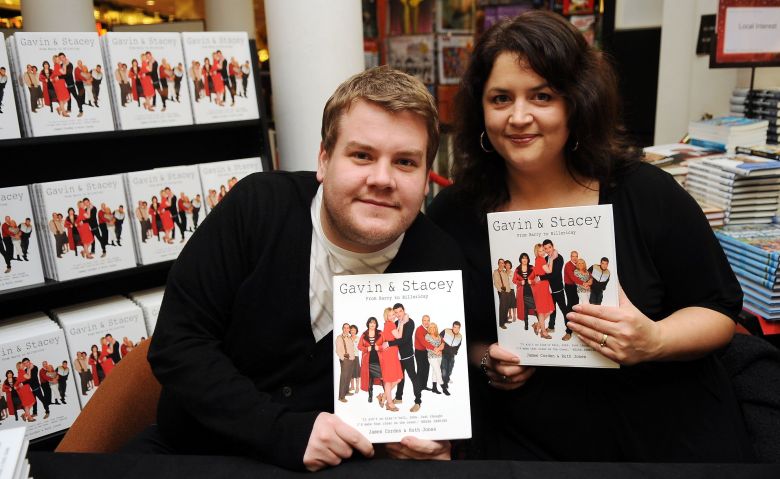 British romantic comedy “Gavin & Stacey” was a huge hit across the pond, and seemed ripe for a U.S. adaptation a la “The Office.” And indeed, both NBC and Fox tried to make American versions of the show – but James Corden, who created the series with Ruth Jones, knows why those remakes fell flat.

“They never understood what the show was about,” Corden said of the U.S. networks. “They would buy the show and immediately change it.” Corden spoke Sunday to an audience of “The Late Late Show” fans at EW’s PopFest in Downtown Los Angeles. “Gavin & Stacey” followed the budding relationship between Gavin (Mathew Horne) from Essex and Stacey (Joanna Page) from Wales, and how their families are brought together. Corden played Gavin’s best friend, Smithy, while Jones was Stacey’s pal Nessa. The show launched in 2007 on digital channel BBC Three, but was so popular by its finale (in New Year’s Day 2010) that it had graduated to BBC One.

NBC first developed a version of “Gavin & Stacey” for the 2008-2009 TV season, but the show ultimately never went forward. A separate version for Fox in 2013 was titled “Us & Them,” and was even picked up to series. Jason Ritter and Alexis Bledel starred as the title characters, while Michael Ian Black, Jane Kaczmarek, Ashlie Atkinson and Kurt Fuller also starred.

Six episodes of “Us & Them” were produced, but Fox never aired them.

What went wrong? According to Corden, the American networks demanded more conflict between Gavin’s and Stacey’s families. “But our show wasn’t about that,” he said. “It was about the fact that most people’s every day life involves very little conflict. Most people like their friends. They might even hate their job, but they sort of get on with it. We wanted to make a show that held up a mirror to real life. American networks wanted there to be [fights] all the time.”

Corden said he and Jones were asked to write the U.S. adaptations, but it didn’t feel right to them. “How can we write a show about two American families when we’re from England and Wales? We were like, ‘good luck.’ But it’s not a surprise they were never able to make a go of it.” At the event, Corden also recounted how CBS offered him the “Late Late Show” gig. When he was approached, Corden was developing a pilot for HBO, which he still hopes to write at some point.

Corden also reflected on the success of “Late Late Show” bits like “Drop the Mic” and “Carpool Karaoke.” Corden credited the segments’ “intimacy” for its success. “These people are genuinely the biggest stars on the planet who very rarely are ever on their own. And then they get in a car with me
convoy. People seem to really like it… what I’m most proud of about them is the interview in them.”

Corden said he also now runs into performers who turned down “Carpool Karaoke” when he was just starting it. “I love bumping into those people who said ‘no,'” Corden said. “[They ask if there is] any chance to do it. I say, ‘Yeah… that chance was January last year!'”

Stay on top of the latest breaking film and TV news! Sign up for our newsletters here.

This Article is related to: Television and tagged CBS, James Corden, The Late Late Show with James Corden