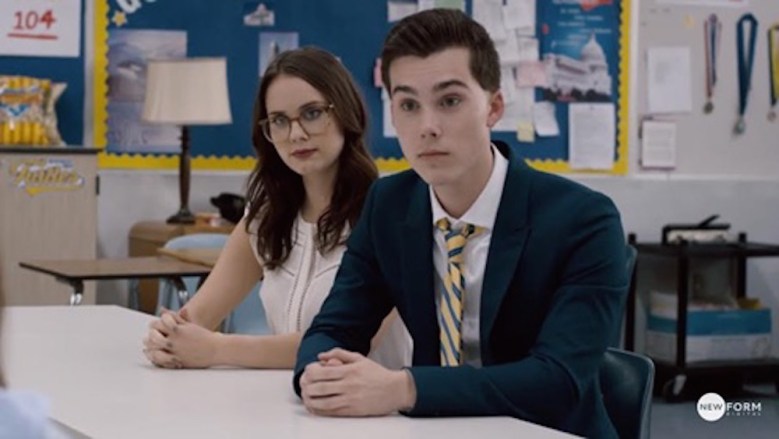 Jeremy Shada has never seen “Rushmore” or “Election” (granted — he’s been busy as a working actor for the majority of his 19 years), but he plays politico teenager Tyler Prendergast with a magical combination of Max Fischer’s charisma and Tracy Flick’s moxie.

Tyler Prendergast is the anchor at the heart of “Mr. Student Body President,” a snappy and smart comedy that takes its teenage characters as seriously as they take student government. Tyler runs a tight ship at Berenger High, buoyed by his right-hand woman Hadley (Arden Rose), always to the dismay of his formidable principal (Christina Moore). Whether it’s a hall monitor strike, a problem with the peace treaty between the nerds and the jocks, or a power play from an upstart freshman, there is no problem Tyler and his team cannot handle.

READ MORE: ‘Adventure Time’ Is Ending, But Its Legacy Is Secure

Created by Ryan Hunter and Jack Ferry with New Form Digital, “Mr. Student Body President” is set in an outrageous and whimsical high school world that, despite its conflicts, seems highly aspirational. Devoid of any tired romantic storylines or nasty bullying that goes on in real high schools, Hunter and Ferry subvert those typical high school tropes with nerds who win elections because of viral fame and goth girls who get the guy for being funny.

For instance, when Tyler backs a candidate for freshman class president to unseat a dangerous rival, the only other person who submitted to the ballot is Blair McGunty (Jackie Averia), a loner whose strange Instagram videos make her at first a liability, and then a runaway winner. The episode plays with the unpredictable nature of viral fame, while celebrating the eccentric behavior that wins Blair the election. “That character is not very obvious — she’s just a random weird person that has a very bizarre personality,” Shada told IndieWire in a phone interview before attending New York Comic Con.

Shada developed a dedicated fan following from his voiceover work playing Finn in Cartoon Network’s “Adventure Time,” and clearly working on the critical darling gave him an eye for quality writing. He appreciates the unexpected storylines in “Mr. Student Body President,” and praised the writers for avoiding “the general teenage dating drama and all that crap. It’s amazing that we have so many stories to tell without having to go there, which comes from the great writing.”

The humor in “Mr. Student Body President” strikes a fine balance between being both family friendly and realistic. Sure, Tyler is teased for being a virgin, but the writers turn this into a good thing when Hadley remarks: “It has recently come to my attention that all of Tyler’s political ambition may in fact be the product of misdirected sexual frustration.”  In order to get him back on track, she must sabotage his budding romance.

As a teenager himself, Shada values the mature humor in the show. “We’re not talking down to our audience, we just do what we think is funny without pandering,” the actor noted. “Most 14-year-olds can understand a lot more than we give them credit for.”

Shada’s most prominent roles to date have been in voice acting (he also stars in Dreamworks’ “Voltron: Legendary Defender”) — the New Form series marks his first lead in an on-camera role, but it was surely “Adventure Time” that made him a household name amongst a certain set.

Shada never expected “Adventure Time” to be such a huge hit. “You hope stuff is going to be great, you’re putting all your hard work into it, but you never know how people are going to receive it,” said the young actor. “It’s opened so many bizarre doors, it’s like the gift that keeps on giving.”

“Mr. Student Body President” is halfway through its 10-episode run on Verizon’s go90 streaming service. At 13 minutes each, the well-crafted episodes are sure to catch the attention of savvy teen viewers who like unexpected comedies about smart people. Given its roster of hits like “I Ship It,” which won the Streamy Award for best drama, and the upcoming thriller “Cold,” New Form Digital has been setting itself apart from other digital studios with its quality programming. Someone over there must be taking notes from Tyler Prendergast.