Zach Galifianakis and Jon Hamm star in this spies-in-suburbia farce. 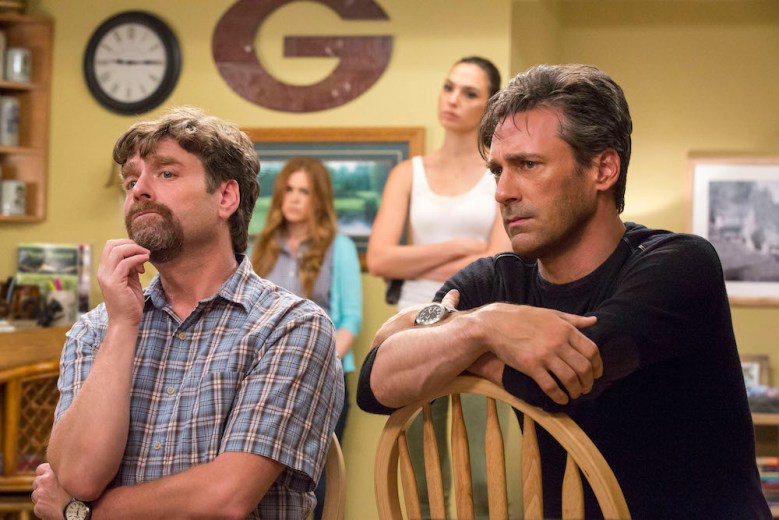 “Keeping Up with the Joneses”

The most surprising thing about “Keeping Up with the Joneses” isn’t that it’s actually funny, but that some touching unlikely friendships emerge amidst the outrageous action sequences. Jeff Gaffney (Zach Galifianakis) is a lovably dull suburban husband, who dotes on his wife, Karen (Isla Fisher), and enjoys a simple life in his beloved cul-de-sac. With the kids off at summer camp, the Gaffneys have time on their hands to wring their hands over the mysterious new couple that moves into the neighborhood, making an all-cash offer on the house across the street.

Tim and Natalie Jones (Jon Hamm and Gal Gadot) are gorgeous, worldly and very much in love. Naturally, everyone in the cul-de-sac hates them. Except affable Jeff, who quickly develops a “man-crush” on Tim (in the words of the movie). But Natalie’s perfect potluck dishes and Tim’s glass-blowing hobby are not fooling Karen, whose boring suburban decorator routine leaves her longing for adventure.

READ MORE: ‘Keeping Up With The Joneses’ Trailer: Jon Hamm and Gal Gadot Have A Killer Secret

Karen is right to be suspicious; Tim and Natalie turn out to be undercover operatives. With Jeff’s low-profile HR job at a high-profile aeronautics corporation, he is the perfect target for Tim’s bromantic seduction. Unfortunately, the bromance begins with Tim taking Jeff to his favorite back alley snake restaurant, where they are greeted by a caricature of an Asian restauranteur (Bobby Lee), before the scene devolves into typical comedy shock-fare when Jeff is bitten by the still-breathing severed head of the snake he is already eating.

While this is all unfolding, Karen and Natalie are playing out their own tired trope: When Natalie catches Karen following her in a lingerie store, the over-sexed foreigner encourages the buttoned-up suburbanite to join her in her dressing room so she can teach her how to excite her husband. “Keeping Up with the Joneses”

The movie rights itself — both in pacing and played out attention grabs — once all (or most) is revealed. The bloated set-up pays off when Jeff and Karen’s meddling lands them in the middle of the Joneses’ secret mission, which turns out to be a plot to catch the employee who has been using Jeff’s work computer to sell classified documents to an evil arms dealer named The Scorpion.

Galifianakis and Fisher shine when they are fumbling with their seat belts during a high-speed car chase, or taking very seriously their very silly code names (“Rascal Flats” and “Mrs. Flats”). Galifianakis is well cast as the anxious Jeff, hemming and hawing like a 21st century, suburban Woody Allen. With Karen leading the charge on snooping on the Joneses, their dynamic is reminiscent of the one between Allen and Diane Keaton in “Manhattan Murder Mystery.”

The film has a few tricks up its sleeve, which gives the rather predictable plot some welcome boosts. The casting is spot on; it’s tough to go wrong with Hamm as a devilishly handsome, cloyingly charming international spy. Gadot impresses with her comedy chops, which will hopefully elevate the former Miss Israel out of the superhero blockbuster pipeline and into some more interesting roles.

The action sequences are fun, if only because it is so rare to have four people in the car during a chase scene. Galifianakis carries the movie, and it is difficult not to laugh when he says things like, “we love humor,” or places the wrong emphasis on, “this is my wife, Carl.” It’s unfortunate that screenwriter Michael LeSieur couldn’t resist a Caitlyn Jenner joke using her old name (poor form), a urinal design trend (reaching) and a gratuitous kiss between Fisher and Gadot (how else could she possibly have slipped her that knife?).

The one surprise in “Keeping Up with the Joneses” is the sappier moments that play on the unlikely friendship between the couples. When the Joneses are commanded to leave the Gaffneys as “collateral damage,” Tim asks Natalie if she really wants to leave their new friends. “Of course not, they’re our neighbors,” she replies. It seems the charms of the cul-de-sac are too great for even international spies to deny.

Viewers who can’t get enough of Galifianakis or Hamm will enjoy seeing the two spar onscreen, delivering in spades the unexpected phrasing and smoldering smirks each actor does so well. Just be prepared to tolerate a few false starts as “Keeping Up with the Joneses” barrels toward its inevitable conclusion.

“Keeping Up with the Joneses” is in theaters on Friday, October 21.