Michael Moore's latest project is more of a stunt than it is a movie, but the blue-collar polemicist makes a strong case for our first female President. 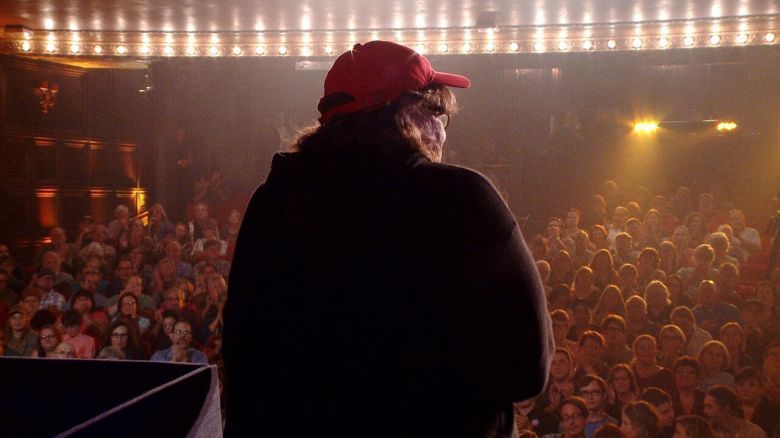 He knows that Hillary Clinton is way up in the polls, but he remembers the huge lead she had in the polls on the morning of the Michigan primary earlier this year, a primary that she ultimately lost to Bernie Sanders. He knows that it’s going to be difficult for Donald J. Trump to be elected President with such a small percentage of the female vote — and the black vote, and the brown vote, and the Asian vote, and the gay vote, and the Jewish vote, and the college-educated vote and the cuck vote — but he was shaken to his core by the summer’s Brexit referendum, and he strongly believes that any Democrats who are already dancing in the end zone are doing their part to help usher America’s whiniest billionaire into the Oval Office. He was a Bernie supporter from day one, but he knows what’s at stake, and he’s afraid the rest of us might be growing complacent.

So he made a movie.

More accurately, he recorded a one-man show, and is using his cultural cachet to sneak the results into movie theaters Beyoncé-style as a true October surprise. Filmed at a small theatre in the Republican-leaning city of Wilmington, Ohio (where “Trump voters welcome” was written across the marquee), “Michael Moore in TrumpLand” is both a speech and a sideshow, a glorified Ted Talk with audience participation and some mercifully infrequent visual aids. Fearless and folksy as always, the blue-collar humanist plants his flag deep in the clogged arteries of the American heartland, trying to level with people on both sides of the aisle. “I am not a Hillary voter!” Moore announces to scattered applause, though it’s clear that he’s imminently about to become one.

READ MORE: Michael Moore’s Plan To Show His New Film To Millions Of Americans Before The Election

He speaks to the frustrations of middle class workers, and he sympathizes with why they might be seduced by Trump’s empty promises. He speaks to the frustrations of the #BernieOrBust faction, and reminds them that revolution has to be put on hold until November 9. Most of all he speaks to the men in the room, and — in the most impassioned and convincing part of the film — he implores them to recognize that it’s high time for a woman to take the reigns. “You can hate Hillary Clinton,” he declares to the appreciably diverse crowd, “but make a sacrifice for your country and vote for her on November 8.”

Moore’s performance was captured only 11 days ago, which feels remarkable until you remember that — in this dystopian nightmare of an election cycle — 11 days is long enough to die 1,000 deaths. 11 days ago, Billy Bush was still an American hero. 11 days ago, Texas was still a red state. 11 days ago, Trump still liked “Saturday Night Live.” Before the movie, you think: “How did Moore make this so quickly?” During the movie, which is so flatly shot that it makes Spalding Gray look like Steven Spielberg, you think: “What the hell took him so long?” It never feels particularly out of date (Trump was a narcissistically cartoonish threat to our democracy last week, and he’ll be a narcissistically cartoonish threat to our democracy next week, too), but it’s hard to imagine what value something like this might have 20 days from now.

Film reviews are often written in the present tense, but “TrumpLand” is fixedly anchored to October 18, 2016, the night of its pop-up premiere at Manhattan’s IFC Center. This is a movie that is at the absolute forefront of the American conversation right now, and one that — in less than three weeks time from today’s date — will feel like ancient history. On October 7, it was a live show, on October 18 (and for the next few days), it will be a rousing piece of liberal propaganda, and then on the night of November 9, it will petrify into something else for all eternity. Worst case scenario, the film will endure as a cautionary tale; best case scenario, it will survive as a time capsule of our country at one of its darkest moments. How bizarre that Moore isn’t capitalizing on the immediacy of his film and releasing it online; perhaps he’s too much of a ringmaster to feel comfortable without a circus.

Either way, “TrumpLand” won’t be remembered as a great comedy. Moore’s aw-shucks brand of political sarcasm is best served with a healthy dose of righteous anger (it’s no accident that “Bowling for Columbine” and “Sicko” are his funniest films), and while his decision to cut Trump out of the conversation allows him to make a more direct appeal to the most vulnerable voters, it certainly dulls the knife he always uses to cut into the greed and cynicism that has crusted around the country he loves.

It’s easy to appreciate how this election has made things difficult for political comedians: Hillary Clinton isn’t funny, and Donald Trump is producing his own bloated farce on a daily basis. But Moore’s premeditated attempts to wring some laughs out of this category 5 shitstorm are so half-assed that you wish he hadn’t bothered (the most egregious being a video sketch that imagines what TV news might look like on the day of Trump’s inauguration). It’s as though he realized that the film could have been just as successful as a podcast, and compensated for that fact by shoehorning in some needless visual razzmatazz. On the contrary, what little visual comedy there is to be found here all comes from the audience. “TrumpLand” is peppered with evocative, hilarious and brilliantly timed reaction shots, each of which rewards Moore’s decision to fill the room with such a diverse cross-section of his fellow Americans (pockets of Mexican and Muslim-Americans — likely actors who have been hired for the occasion — are cordoned off in their own balconies). And Moore never loses sight of his target audience. This is not a film for people who see Trump as a dangerous conman who has nothing but contempt for the voters he might sucker into his corner, nor is it a film for people who spend their days spamming Jewish Twitter users with Holocaust-themed images of Pepe the Frog.

No, “TrumpLand” is targeted directly at the millions of Americans who have been screwed over for far too long, and see a self-destructive caricature like Trump as a repository for their honest frustrations; it’s targeted at the millions of Americans who are decent and desperate. And it appeals to the coveted Ken Bone demographic with the respect that so many of us struggle to conjure for them, mansplaining a feminist tale of hope, truth and possibility. Moore leverages his love-hate relationship with Hillary into a broadly accessible internal dilemma — after inviting and lightly dismissing some of the audience’s anti-Clinton talking points, he paves over the potholes by waxing poetic about the candidate’s long history of being “One hot, feminist, shit-kicking babe.”

He talks about the strength she’s always exhibited, the force of will she’s always shown in a world where women are so often silenced. He talks about her failed attempts to bring universal healthcare to this country, and how she’s never resigned to the arbitrary obstacles that people have thrown in her path. He argues that the future is female (“Women generally don’t shoot you unless you deserve it”), and — in the film’s most powerful moment — he proves his point by playing some tape from one woman’s past. Listening to the 1969 commencement address she gave to her graduating class at Wellesley College, it’s almost impossible for any rational person not to appreciate that Hillary Clinton has lived her life in service to this country, and genuinely wants to leave it in a better place than she found it. She truly gives a shit, and that’s saying a lot, these days.

“We’re all Americans,” Moore declares, “We sink or swim together. And I’d rather swim.” Hillary may not be the lifeboat you want, but she’s the lifeboat we’ve got, and there’s enough room on board for everybody.

“Michael Moore in TrumpLand” is now playing in theaters.

This Article is related to: Film and tagged Reviews