From playing crazy to space battles to the spy game, the versatile actor is enjoying a new range of opportunities in the modern TV era. 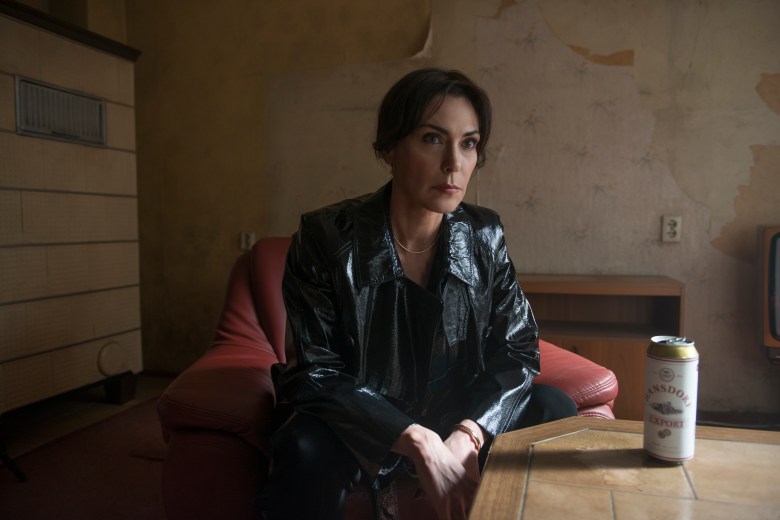 “Homicide: Life on the Street.” “Star Trek: The Next Generation.” “24.” “Battlestar Galactica.” “The Killing.” Any fan of great television has loved at least one show featuring Michelle Forbes, who’s been a memorable on-screen force for over 25 years.

That said, relatively early in her career the talented actress earned a bit of a reputation for being reluctant to sign onto series full-time, mostly sticking to recurring roles that didn’t require a serious commitment.

But one of the benefits to the age of “Peak TV” is that Forbes no longer finds herself in situations where people want to “own” her, and she’s able to dive into a variety of projects. For example, the new Epix series “Berlin Station,” in which Forbes gets to play in the realm of spies and intrigue, as the internal branch chief of a CIA office in Berlin.

READ MORE: Epix CEO Mark Greenberg on Why His Channel is Getting into the Original Scripted Series Game

When IndieWire sat down with Forbes at the Television Critics Association press tour, it was clear that she was thrilled about the show. From getting to shoot in Berlin (“one of my favorite cities,” she declared) to working with an ensemble including Richard Armitage, Richard Jenkins and Rhys Ifans (“I saw this cast and lost my mind. I love them to bits. I’d take a bullet for them”), everything about doing the series made sense to her.

“I always say there are so many different reasons you choose something,” she said. “It could be actors you want to work with, or the material. [“Berlin Station”] was just all of those things together. Everything about it felt right.”

But it’s just one in a variety of roles that Forbes has gotten to explore of late, because what matters to her the most is variety. Something she’s gotten a fair amount of in recent years.

You’ve had such a long run in television. How have you seen things change since the earlier days?

I mean, when I think, I’ve been doing television for 25 years, so that’s two and a half decades. [jokingly gasps] No, I’m happy, I’m happy about that. But it used to be the ugly step-child in the basement, didn’t it? Movies were the thing and then you had “Miami Vice.”

I was really fortunate because the first series I ever really signed on for was “Homicide: Life on the Street,” and that was on network television but obviously way ahead of its time, the way it was shot, the writing. It was the godfather to “The Wire.” I was really fortunate to have that trajectory, with such amazing writing and phenomenal cast. I guess that was unusual at the time, we didn’t really have cable.

Now, I don’t really go to the cinema anymore. There’s too much good stuff on television and to really be able to sit and live with these people for 10 hours at a time, for years at a time. To go on these longer journeys with them, I find it a little gift. It’s like creating a Gabriel García Márquez novel as opposed to a short story. You know?

Oh, absolutely. When you talk about the first show you really signed on for, what goes into deciding to sign on for a show and make that commitment?

I know, I’m such a commitment-phobe.

I didn’t want to say, but I did read a few things…

Because you don’t know, unless you know the people involved — it can be an arranged marriage. You just don’t know and then you’re wed for seven years, and it could be in some far-flung place where you don’t have your friends and your family. So it’s a real crap shoot. I would say that Hollywood is just like one never-ending night in Las Vegas — no oxygen, no clocks. Well, these days, it’s not quite the commitment it used to be. And it seems like you’ve been able to do a bunch of different things at once?

I was. Like last year, I did two series at the same time. Commuting between Atlanta and Vancouver.

There’s no direct flight. So it was a full day of traveling. It was like another full day of work. But yeah, it’s not 22 episodes a year now. It’s not nine months, seven years, it’s 10 episodes, maybe a year or two. They let you do other things, as well, because it’s a shorter period. Because we’re only shooting, say, five months out of the year — if you want to do another great show, you can. Or, as in my case, I could be a regular on two shows at once. It’s great that they opened that up.

That is great. Is there something contractually about it? Do you make sure to say I’m not exclusively on this show or..?

But there’s no contractual thing where you say, “I’ll do your show, but you have to let me be a series regular on another one if it works out.” I think people just try to work it out. They’re just not as into their ownership as they used to be.

How important, these days, is variety to you?

It’s everything, and I’ve been super fortunate. I mean, you remember I did that show last summer, “The Returned,” we only got one season but my friend Raelle Tucker, who wrote it, she wrote that role for me. And it was like this crazy woman of the town muttering to herself and you couldn’t figure out why she was there. And I was like, “Oh that’s so nice, you wrote that for me… Why is she crazy?” But she knew that I would have fun, and so it was great to be able to do that.

Then Maryann in “True Blood” and Kate on “In Treatment,” which was one of my absolute favorites… Oh, and all the ones in space. There was Saddam Hussein with bangs in space in “Battlestar Galactica.” So yeah, I’m really lucky, you know. I’ve always been so scared of being pigeon-holed, and I constantly kick against that.

I mean honestly, the only thing I can think about you getting type-cast as is a powerful woman, and there are worse things in life than that.

There are worse things in life than that, but that’s why I fight to play the ones who aren’t powerful, too. You know, like the woman wandering around going, “I’m over here.” Or Kate [of “In Treatment”], Kate wasn’t powerful. She was confused and she was hurt.

But even if you’re pigeon-holed into that, I mean look, I’m 5’10” and nobody’s going to cast me as a wallflower. But I just feel like I’ve been so lucky because in that one place of powerful woman, there are all these shades of wrath, in all different professions and all different everything.

“Berlin Station” premieres Sunday on Epix. Below, check out an exclusive behind-the-scenes clip about the making of the show.