The actress wanted to be pushed to the limit -- and this summer's breakout hit allowed her to do that, and a whole lot more. 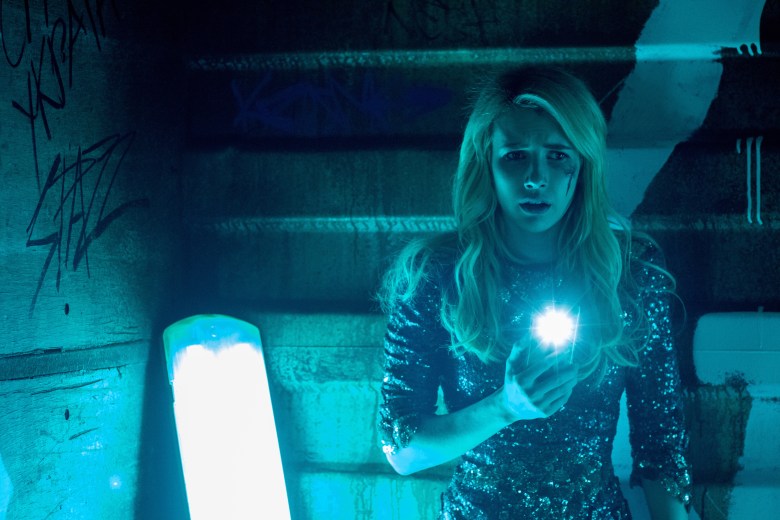 Few deep summer offerings surprised as pleasantly as Henry Joost and Ariel’s Schulman’s “Nerve” did this past July. A social media-centric actioner about a pair of attractive teens (Emma Roberts and Dave Franco) who got pulled into the wild world of online gaming via a nefarious app that pushes its players to extremes while its watchers dabble in increasingly inhumane asks, “Nerve” is relentlessly entertaining and even occasionally thought-provoking (our own David Ehrlich called it “‘Pokemon Go’ meets David Fincher’s ‘The Game'” in his review, which is an entirely fair assessment).

READ MORE: ‘Nerve’ Directors Ariel Schulman and Henry Joost: How They Made the Most Topical Film of the Summer

Bolstered by Franco and Roberts’ winning chemistry and a fun, fast-paced script, it’s eye candy for the Twitter Era — pretend that’s a thing — and one heck of a summer sleeper. The film also provided Roberts the chance to go way outside her comfort zone, just like her character Venus (AKA Vee).

Initially gun-shy about participating in Nerve, the hottest-thing-ever-OMG game that has consumed most of her social circle, Vee eventually gives in and goes whole hog on this “dares from strangers for money on the internet” thing, learning a whole lot about herself in the process. It’s a classic coming-of-age tale, albeit one that involves ill-advised motorcycling riding, prowling a department store in nothing but underoos, and a challenge involving a rickety ladder that any sane person would happily turn down.

So why was Roberts perfect for the role? In a new behind-the-scenes clip from the film’s upcoming home video release, co-directors Joost and Schulman, along with Roberts and fellow stars Franco, Emily Meade and Miles Heizer, explain how Roberts brought her own charm to the film, finding herself in a part that allowed the long-time actress the chance to explore something totally new: Being an action star.

“Nerve” hits Blu-ray and DVD tomorrow, Tuesday, October 25. Check out our exclusive behind the scenes clip below.

This Article is related to: Film and tagged Behind the Scenes, Dave Franco, Emma Roberts, Nerve, Video