"Republicans approve of the American farmer, but they are willing to help him go broke." - Harry Truman 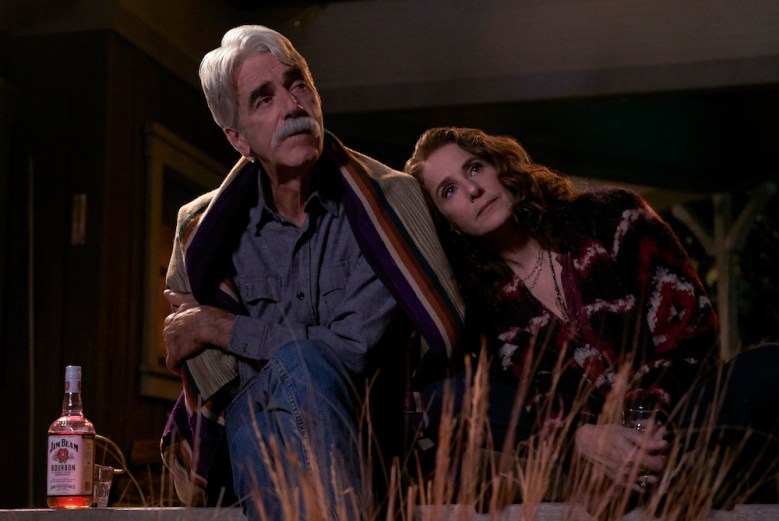 Let’s get this out of the way early: “The Ranch” Season 2, or Season 1: Part 2, or whatever Netflix wants to label it, remains an absolutely awful sitcom. It’s not funny. It’s extremely predictable. It feels dated in every facet — from the laugh track to the storylines — even though it’s tracking a family resolutely living in the “good ol’ days.” “The Ranch” is still a sexist, offensively stereotypical depiction of rural farmers, and there’s no reason to watch the latest 10 episodes, just as there was no reason to watch the first 10.

But accompanying the tragedy that is the show itself is a specifically depressing chronicle of a classic American rancher who’s slowly but steadily losing everything he’s grown to love, respect and understand about an identity forged by those of The Greatest Generation. As he inches closer and closer to death, he faces limitations and loss. But more importantly, his soul is dying — and with it, the American dream.

Played by Sam Elliott, Beau Bennett was a man who entered the second half of Season 1 in a troubled state. His wife had just left him, driving off into the night after what seemed like a reconciliation between the long-warring couple. We, the audience, knew as much about her whereabouts as Beau did, meaning she’d vanished without any indication toward why or where. To pile on, his family ranch had been facing more trying times than ever. Things got so tough that Beau, Colt (Ashton Kutcher) and Rooster (Danny Masterson) had to live without power for weeks, simply because they needed to divert their dwindling funds toward the ranch. By virtually every metric, Beau had bottomed out. And what happens when you reach rock bottom on a sitcom? You crawl your way out. You find the light. You get better.

Well, that doesn’t happen for ol’ Beau. [spoilers ahead for “The Ranch” Episodes 11-20]

Be it because “The Ranch,” as a sitcom, is too terrible to know what to do with its characters or because his story is operating on its own, separate from the dreadfully bad jokes surrounding it, Beau begins the new set of episodes in an understandable state of rage. He’s so pissed off he doesn’t even bother insulting his kids. Instead, he begrudgingly goes about his duties, every so often letting out an angry grunt or cursory denigration. But then something strange — something legitimately upsetting — occurs, to Beau and the audience: After Rooster returns to the ranch with Maggie’s collection of potted flowers, he’s scolded by Beau for caring whether or not they survive. “If she cared about this stuff, she’d be here to look after it,” Beau tells his first-born son before ending the conversation with, “They are beautiful…let ’em die.”

Later that night, though, Rooster is awakened by the sound of Beau planting the flowers in a hand-made bed right in front of the house. The abandoned husband claims, “It’s supposed to freeze tonight,” so saving his wife’s flowers can’t wait until morning. But then Rooster notices he’s crying, and as the old rancher stands up, looking at his son with tears falling down his face, he asks, “Am I really that hard to live with?” It’s a brief moment, quickly passed over by a show that either doesn’t know what to do with the authentic drama it creates or doesn’t care to know, but Elliott’s committed turn combined with his iconic identity as an American male archetype make it resonate beyond the series. Somehow, his hole is only getting deeper, and his pain has only just begun.

About midway through the new season, after Maggie returns to the ranch with a half-assed explanation meant to be more meaningful than it is — shocker: The women in “The Ranch” don’t get their due! — Beau again finds a new bottom. Rather than reconcile with his wife, betraying his true self to make things work, he agrees to a divorce. The couple of four decades is over, and, even though the actual filing is dragged out for a few more episodes, the (bluntly) poetic metaphor of a snowstorm hitting the ranch right when the couple decides to split is captured with simple beauty: snow falling on a quiet night as two lovers’ worlds shatter.

And yet, it’s still not over. No, not Beau and Maggie’s marriage. That’s done, but the family patriarch still hasn’t hit bottom. The first season ends on its best joke and most brutal betrayal, completing an emasculation that must’ve felt like castration for poor Beau. After secretly trying on Colt’s Uggs on a cold winter morning, Beau is gifted a pair of the fluffy boots by his son for Christmas. The rugged outdoorsman pretends to hate the effeminate slippers in front of his family, but slips Colt a hidden thumbs up to denote his approval. Then, in what is at least the third painfully honest moment from a man uncomfortable with showing outward affection, Beau turns to his oldest son and hands him a present: a knife from his grandfather.

READ MORE: ‘You’re the Worst’: Why Sunday Funday Had to End, According to Aya Cash, Kether Donohue and Stephen Falk Now, the gift itself is excessively sentimental, as far as this particular family is concerned, and a meaningful gesture by itself to any lifelong farmer. But it’s made all the more tearjerking because the father and son have been at war over the last few episodes, ever since Rooster took a job on another farm. Beau felt he was abandoned by his own son, and Rooster argued he was betrayed by his overly-controlling father one too many times. So Beau’s big gesture is an obvious opportunity for reconciliation on a day meant to bring families together. But Rooster rejects the commodified apology, saying his father wouldn’t have to give it to him if he’d just respected his son as a rancher in the first place.

And that’s where we leave Beau: sitting alone in a bar owned by the wife who left him, abandoned by his first-born son and distanced from the ranch he clings to even as his ability to preserve it dwindles by the day. “The Ranch,” oblivious to the tragic impact of its most dynamic character, moves on to cap off the season with Colt’s love triangle — a story that takes up far too much time all season and leads to a predictable finale. But Beau’s presence lingers, just as viewers are left wondering if this is his bottom, or if we’ll dig even deeper in Season 2.

Now, the point of this damaging recap isn’t meant as an argument to watch “The Ranch.” In fact, it’s mostly intended to have the opposite effect. Too many minutes are devoted to gross stereotypes and grosser homophobic jokes to make sitting through Beau’s journey worth it. But there is something within Beau’s tragedy worth examining by better minds than those behind this ignorant disaster.

The long-accepted way of life for the American farmer is no longer working. The world is moving too fast for them to keep up, and many like Beau are being rolled over for better or for worse. No, he shouldn’t be condoning the ignorant lifestyles of his sons, nor should he be so abrasive to change that it costs him his wife. But just as he’s done the work, day in and day out, to keep his ranch running, so to does he do the work to try to repair his relationships at home. The American dream of putting in the work and reaping your just rewards has betrayed one of its most devoted believers, and that is an incredibly painful tragedy to watch.

Beau did what Maggie asked in Season 1 (Part 1). He made amends with Colt and Rooster in Part 2. He even apologized as best he could to his son after messing up yet again — a fast turnaround for a stubborn father. Yet his efforts aren’t being rewarded, on the land or in his home.

Beau’s lost it all, and therein lies what should be the show’s redeeming tragedy. It’s a shame what surrounds it makes Beau’s story the second-most painful part of watching “The Ranch.”

This Article is related to: Television and tagged Netflix, Sam Elliott, The Ranch, TV Reviews