Still at the top of his game, Ridley Scott drew top Hollywood players to his American Cinematheque Award tribute. 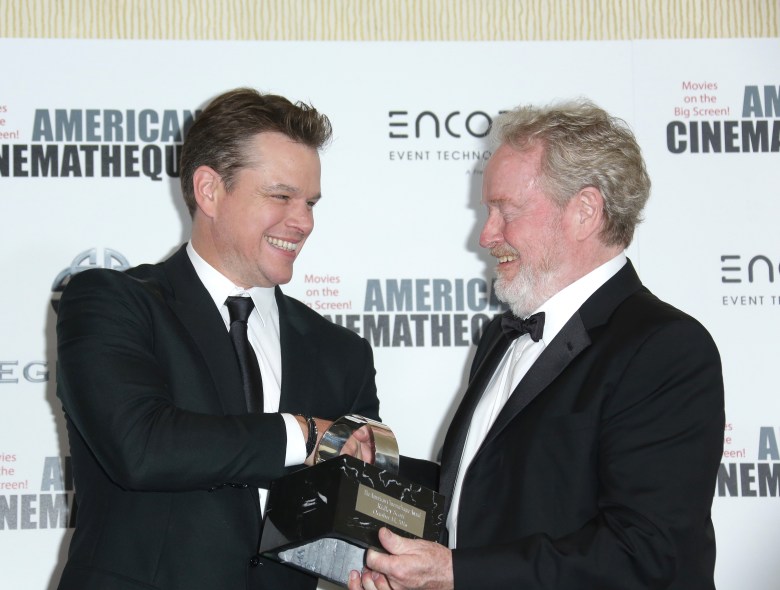 Matt Damon and Ridley Scott at the American Cinematheque Awards.

“Let’s grab this night by the pussy,” said Russell Crowe, exhorting the Beverly Hilton ballroom attendees at the annual American Cinematheque Ball to go out and vote on election day. Then the night’s charming master of ceremonies got down to the business at hand: tributing director Ridley Scott.

Crowe reminded us that Scott made his first feature film at 40—and showed us his delightful black and white 1962 “Boy and Bicycle” short student film, shot on a borrowed 16mm camera and starring his younger brother by six years, Tony, who also became a director. At night’s end, when grateful “The Martian” Oscar nominee Matt Damon presented Scott, 78, with his award,  Scott tracked back in time, recalling how he wasn’t a very good student, hard as he tried, and the teacher who suggested that he go to art school. Scott attended the Royal College of Art and studied film, although shooting commercials (over 2000) has been his parallel career. There, he realized, “my power is visual.”

At this stage of his life, some younger cinephiles may disregard just how many great films Scott has made, and how unusual and strong they were when they came out, from his 1977 debut “The Duellists” through “Alien” (Scott is directing the 2017 sequel “Covenant”),  “Gladiator” and “Blade Runner” (which was not a hit at the time and is getting a Denis Villeneuve-directed sequel). Sigourney Weaver, resplendent in a gold suit, introduced the women’s section of the evening, admitting that Scott never asked her to consider making her character more sympathetic or vulnerable. Unusual for his generation, Scott has always been confident enough to feature strong women in his movies, from Weaver’s Ripley in “Alien,” Darryl Hannah’s Pris in “Blade Runner,” and Demi Moore in “G.I. Jane” to the tough “Prometheus” stars played by Noomi Rapace and Charlize Theron and Jessica Chastain’s ship’s captain in “The Martian.” Scott had no problem with portraying honestly in “Thelma & Louise” what two Southern women (Geena Davis and Susan Sarandon) had to put up with from men. Many other directors wanted to rewrite Callie Khouri’s characters and the ending, which frustrated producer Scott. “Fuck you all,” he told one writer. “I’ll do it myself.” Scott has been at the top of Hollywood’s filmmaker A-list for decades because he can deliver anything, and has easily mastered the tools of the trade, staying at the forefront of innovative cinema technology, shooting in 3D on such films as “Prometheus” and “Exodus: Gods and Kings.” With last year’s “The Martian,” Scott delivered his best effort since “Black Hawk Down” in 2001. (That was the year “Gladiator” took home Best Picture.) At age 78, his films have nabbed 39 Oscar nominations, won nine, and he’s earned three directing noms (“Thelma & Louise,” “Gladiator” and “Black Hawk Down”). Early in the evening Chris Nolan and Bradley Cooper thanked the night’s Sid Grauman award-winner, Warner Bros. global marketing and distribution president Sue Kroll, for her support in marketing their pictures, calling her “The Marketing Whisperer.”  “That’s the person you are trusting with your baby, your child,” said Nolan, who told me he’s in the editing room on his next film, “Dunkirk.” “She’s going to take it out to the world.”

The daughter of Newsweek critic Jack Kroll was raised a movie buff, which served her well in her studio career. When she was a little girl, she recalled, her father stowed her in the coatroom at one starry Woody Allen function; as she watched the revelers, she decided she wanted to be in that world. Having drinks at the Formosa Cafe with director Curtis Hanson and writer James Ellroy for “L.A. Confidential,” she knew she had arrived. Relying on intuition and instinct is her gift for reaching moviegoers, she said. “It comes from the gut.”

At the start of the night, Martin Scorsese sent a video thanking the Cinematheque for installing 35 mm projectors that will be able to show rare and gorgeous nitrate prints. That’s something I can’t wait to see.