The "Hamilton" star grabbed America by the [redacted] in his first hosting gig. 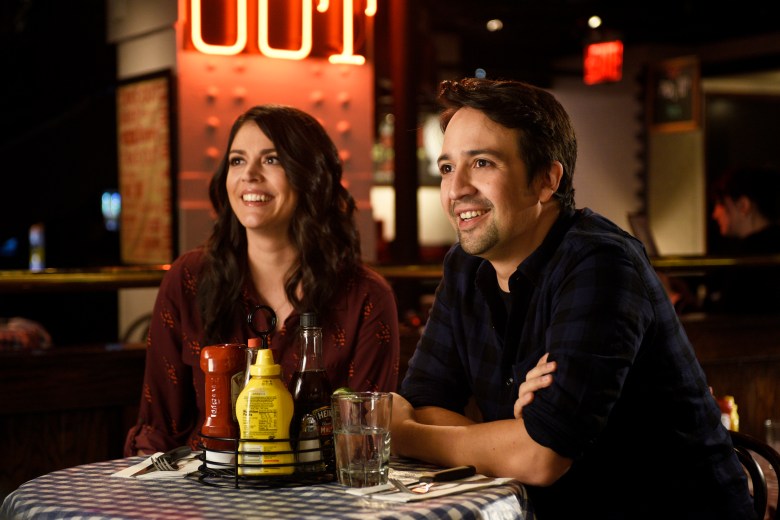 After a reasonably strong outing last week, “Saturday Night Live” returned this week with first-time host Lin-Manuel Miranda and musical guest twenty one pilots. The multiple Tony award-winner met, if not exceeded, expectations as #SNLinManuel soared through sketches with fresh energy and a glimmer in the cast’s collective eye. Even Miranda’s bumpers were adorable! Unsurprisingly, this particular episode was super-saturated with music and culture references, but it offered a fair amount of pointed political commentary as well. Let’s dive in.

The cold open this week was exceptional. Kicking off with “an encore presentation” of last week’s Vice Presidential debate, the evening opened on new cast member Melissa Villaseñor addressing the audience directly. It’s difficult to think of any other example of “SNL” breaking the fourth wall, particularly to address its own shortcomings. In this case, it was having the new Hispanic cast member portray the debate’s “Asian moderator.” As Villaseñor said, “Baby steps.”

Our debate encore was quickly interrupted by a CNN News Alert — and, surprise! Alec Baldwin was back with a spectacular turn as Donald Trump. What really stole the sketch however, was Cecily Strong as CNN Anchor Brooke Baldwin. Watch her recoil in horror as Trump unleashes weird, gross tirades into a hot mic.

Monologue: The Moment We’ve All Been Waiting For

Without giving away too much, it was deeply reminiscent of Justin Timberlake’s “I’m Not Gonna Sing” from the Season 36 finale. Keep an eye out for sight gags — we see you, NBC pages and guy dressed as Lincoln, a proud “SNL” tradition — and hey, it’s good to know that even Lorne Michaels can’t get tickets to Hamilton.

Fortunately, this episode was stacked with Extremely Good Sketches and a few Just Okay ones. Worth noting: The three listed above were the evening’s pre-taped bits.

“Diego Calls His Mom” was a bold choice for “SNL”: An emotional monologue delivered almost entirely in Spanish. When was the last time the show featured a sketch performed entirely in another language, one where the language itself was not part of the punchline? Compare this affecting bit with “Day Off,” a slapstick sketch set in which we see Trump campaign manager Kellyanne Conway just trying to enjoy some free time. One of them feels weightier.

Obviously, this honor goes to Lin-Manuel Miranda. His energy was infectious, his enthusiasm knew no bounds, and it was obvious how much fun the cast had with him all week. Pardon the obvious pun, but our host was a ham. He knew the Internet was expecting a lot from him — and he gave it to them! Miranda anchored his sketches with zeal, whether the dude was singing, chewing scenery, acting self-effacing or carrying an otherwise weak “Music Man” tribute by playing a crooked Wells Fargo employee.

He clearly loved every second of it, and he was good at it, and one can only hope that he’ll remain just famous enough to return in future seasons. As he noted in the monologue, Broadway remains a niche sort of fame. But hey, whatever gets him to the stage.

Something about her performance this week suggests Strong will be the next big comedian to transition to dramatic film. Her subtle physical comedy as Brooke Baldwin in the cold open was remarkable; watch the way her shoulders move, or her effort to keep her expression neutral behind the CNN news desk. Additionally, Strong’s singing voice (in an otherwise flat campfire sketch) was a lovely surprise. We’ve known she’s laugh-out-loud funny since “The Girl You Wish You Hadn’t Started Talking To At A Party” first rolled out to the Weekend Update desk, but as we saw last night, Strong has evolved into one of SNL’s most versatile players. Hopefully, Season 42 will be her time to shine.

With a Broadway star at the helm of this week’s episode, viewers knew they’d be in for a theater-heavy week. The cast has a deep bench of theater in-jokes from which to select sketches, so it would seem easy to place bets on whether “High School Play,” Vanessa Bayer’s child star character, or a cartoonish sitcom parody would make an appearance. Delightfully, this week eschewed all of the above in favor of a pre-taped bit called “Crucible Cast Party.” As any former theater kid (or friend of one) knows, the drama club’s cast party is “the horniest event of the year.” Throw “25 virgins and tons of Sprite” in a room at the end of their “Crucible” run and just watch what happens – or doesn’t. Oh, and revel in Lin-Manuel Miranda done up like a Disney teen idol. Fake braces and a blonde wig on an adult man never seemed so alluring.

“Weekend Update” has finally found its footing — its casual, relaxed approach and easygoing rapport between Colin Jost and Michael Che make the sharp delivery of punchlines all the more welcome. Intelligent, engaging and self-aware, the sprawling segment lands way better than it used to.

And toward the end of an already solid Update, Colin Jost welcomed two undecided voters from suburban Philadelphia to the desk. And who showed up? Former “Update” anchors Tina Fey and Jimmy Fallon as “Denise and Doreene,” two women you’ve undeniably stood behind in line while they buy cigarettes at Wawa. As someone from the Greater Philadelphia Area, it’s hard to know if the rest of the country genuinely appreciated this impression, and every detail of it. America: Do you understand the depths of Tina Fey’s genius Delco impression? Even the haircuts felt incisive.

As the Internet was quick to note, Fallon broke. Somehow, it’s 2016, and Jimmy Fallon, host of “The Tonight Show,” is still breaking in sketches. But Denise and Doreene were such a shocking, enjoyable surprise that it didn’t feel like it mattered. Please, have a hoagie today for them. Go Eagles.

Honorable Mention: Beck Bennett. His deadpan Jake Tapper is flawless, as is his Mike Pence. (Spooky.)

Apart from an excuse to put an acoustic guitar in the hands of Lin-Manuel at the top of the night, seriously, what was this?