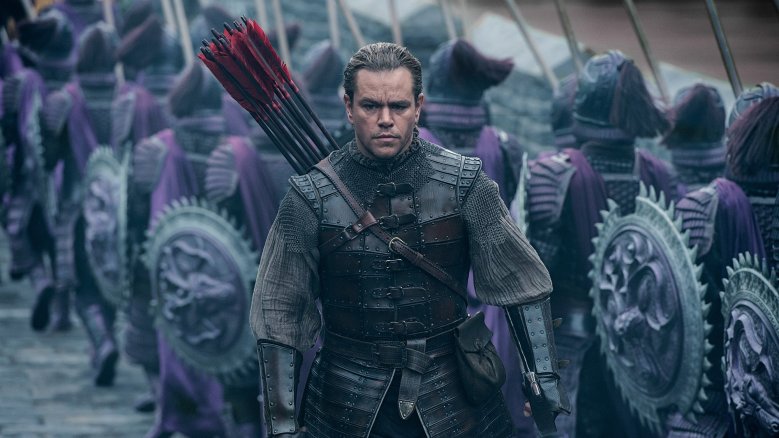 Hollywood has fallen in love with China (specifically Hong Kong) as their new favorite place to destroy. From “Transformers: Age of Extinction” to “Pacific Rim,” China has been repeatedly devastated through the magic of CGI by monsters, aliens and sci-fi creatures thanks to blockbuster directors moving their projects to China. They’re not only to reap the benefits of a newly established marketing cash cow, but also relish the country’s fervent filmic support.

Now, China has recruited now its very own Zhang Yimou to wreak havoc with “The Great Wall,” which is set a few thousand years earlier during the mystical times of China’s medieval era. In anticipation of the flick’s release, New York Comic-Con hosted a panel with the stars and director of Legendary East’s Chinese blockbuster. Moderated by Dave Karger, the panel included star and birthday-boy Matt Damon (the audience sang him “Happy Birthday”), Pedro Pascal (“Game of Thrones”), Jian Tian (“Police Story 2013”), Junkai Wang (member of the popular Chinese boy band TFBoys), and director Zhang Yimou (“House of Flying Daggers”).

This is Yimou’s first English-language film, and he was happy to put his star and Academy Award-winning writer Damon to work on the script, smoothing over the dialogue.

“At opportune moments, you were able to suggest interesting lines of dialogue and change a couple of things,” Karger asked. “Do you think it turned out well?” The crowd cheered and laughed riotously as Damon responded, “I hope so. Maybe if you come out to see the movie and you guys like it, then I wrote a lot of it. If not, well maybe not so much. I completely blame Tony Gilroy.”

Yimou is known for his use of color, showcasing vividly rich and eye-popping cinematography in his Academy Award-nominated “The Red Lantern” and his acclaimed direction of the opening ceremony of the Beijing Summer Olympic Games. “The Great Wall” seems to follow suit. “[Yimou] works with color so much in all of his films, he spent a really long time specifically figuring out exactly the right hue for each color,” Damon said. “There’s a handful of people who can work on that scale.”

Damon and Pascal play a mercenary duo who are “partners in crime;” Damon jokingly referred to them as “Barbarian lovers.” Damon explained that he had “been following Yimou for years, probably since “Red Lantern,” which I think I saw while I was in college. He’s made so many movies that blew me away visually.”

Said Pascal, “I’m a super-fan and super-nerd. I got into Chinese cinema when I was a kid … That’s how cool I was.” And then, to raucous audience laughter, “I had lots of friends.”

Pascal went on to say he “wrote [Yimou] an email, just going crazy at the thought of being in a film with him. I kissed his ass basically and when I got to China, I got a handwritten letter from him in Chinese characters that I have framed … in my bedroom.”

“Matt, do you have one framed in your bedroom?” queried Karger, to which Damon boldly claimed “I actually do.”

The film community, as well as the Asian community, have decried Yimou’s film for “whitewashing” by casting two white males as the leading roles. (Damon called the whitewashing controversy “a fucking bummer.”) In response, Constance Wu (“Fresh Off the Boat”) tweeted that it’s a “racist myth that [only a] white man can save the world” going on to say that “money is the lamest excuse.”

Yimou does not see it that way. “Making this movie was awesome. With so many great actors—it was amazing.” He ended the panel by declaring that “this movie is made for the world audience. Not just a Chinese one.”

This Article is related to: News and tagged Matt Damon, The Great Wall, Zhang Yimou