"Melania" claims that the election is being rigged by Billy Bush. 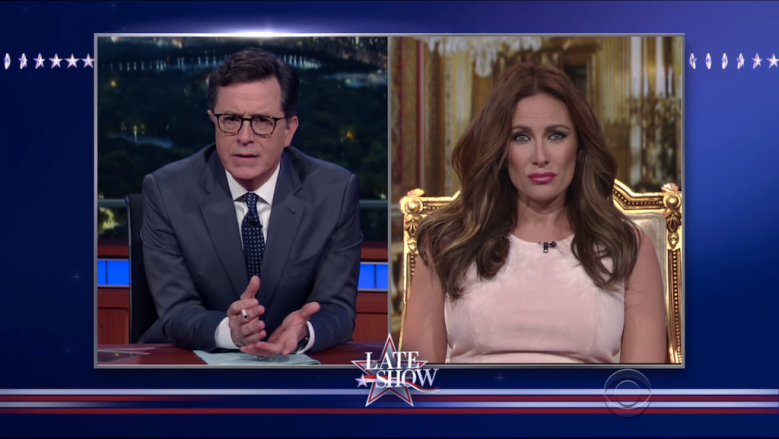 “The Late Show with Stephen Colbert”

Back in March, Laura Benanti appeared on “The Late Show with Stephen Colbert” and the two discussed her physical similarity to Melania Trump, the current wife of GOP presidential candidate Donald Trump. Benanti returned to “The Late Show” in July to parody Melania’s RNC speech, which some believed to be plagiarized from Michelle Obama’s 2008 convention speech. Now, Benanti returns again to “The Late Show” to discuss her recent interview with Anderson Cooper in which she said that her husband was “egged on” by former “Today Show” co-host Billy Bush to make his lewd remarks. Watch the segment below.

In the interview, “Melania” mostly poses for the camera and poorly conceals that she’s being coached off-screen. She tries to move Colbert off of her interview and onto more serious topics, like the fact that the election is being rigged by “left-wing media, international bankers, and Billy Bush.” She also claims that all of the groping accusations against Trump are lies, except for the one’s caught on tape, which is just “locker room talk.” She closes by claiming that no matter how nice men seem, they’re all secretly “foul-mouthed, Billy Bush-grabbing pigs.” “If only a woman can be president,” she muses.

“The Late Show with Stephen Colbert” airs weeknights at 11:35 p.m. ET only on CBS.

This Article is related to: Television and tagged Laura Benanti, Melania Trump, The Late Show with Stephen Colbert