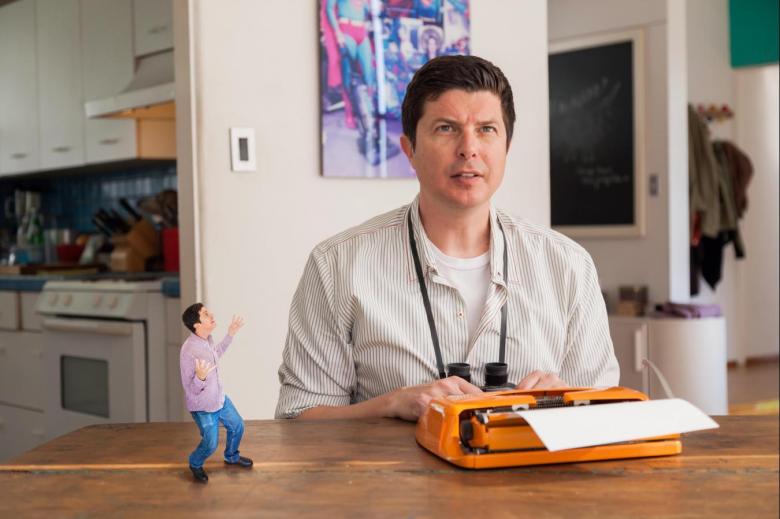 Last year, Todd Rohal’s “Uncle Kent 2” premiered at SXSW to positive reviews, with IndieWire’s own Eric Kohn calling it “the craziest movie sequel ever.” A follow-up to Joe Swanberg’s 2011 film “Uncle Kent,” a portrait of indie actor and animator Kent Osborne, “Uncle Kent 2” follows Osborne’s quest to come up with a sequel to “Uncle Kent” by traveling to a comic book convention and confronting the end of the world.

Now, Factory 25 has released a novelization of the book by L.P. Eaves. Check out an exclusive excerpt from the book below featuring Uncle Kent’s visit to a doctor to discuss earworms.

Todd Rohal has previously directed the “P is for Scary” segment in “ABCs of Death 2,” and the comedies “Nature Calls,” “The Catechism Cataclysm,” and “The Guatemalan Handshake.” Meanwhile, Joe Swanberg’s recent films include “Digging For Fire,” “Happy Christmas,” and “Drinking Buddies.” He also just released his Netflix series “Easy.”

“Uncle Kent 2” is available to stream on Fandor, Bittorent, and Vimeo. It will be available on iTunes, Amazon, VOD, and more on November 15th.

In his “Anatomy of Melancholy” of 1622, Robert Burton writes of old men: “They are lean, withered, hollow-eyed, wrinkled, harsh, much troubled with wind, and a griping in their bellies, dejected looks, flaggy beards, terrible and fearful dreams. Sister Anne, what dreams be these that confound and appall me! Continual, sharp, and stinking belchings, as if the meat in their stomach were putrefied.”

Wouldn’t we like to think that times have changed?

But in the doctor’s waiting room, Uncle Kent came face to face with contrary evidence. Robert Burton would have felt right at home with the helplessly burping representative of “The Greatest Generation” who took the chair next to Uncle Kent’s. No Elizabethan courtier after a feast of spoiled oysters could have belched half so well or so expressively. No doubt this old-timer had stormed the beaches of Normandy, but what was that to Uncle Kent, or to anyone forced to imbibe of his foul eructation?

Yet were they to compare dreams, yon old man and Uncle Kent, who knows what common ground they might have trod upon?

In such circumstances, however, the mind tends toward escape. Like many of his generation, Uncle Kent suckled joylessly at the teat of his communication device. How many sheets of fine parchment would Will Shakespeare have balled up and discarded, had he half the second thoughts of Uncle Kent!

But as he struggled, deleting text after text in his attempt to make up with his dear friend Joe S. for their misguided kerfuffle of the night before, at least one shining idea flashed comet-like across the screen: Jenny Prediger!

Yes, Jenny Prediger, the embodiment of brains and beauty for a starved generation of mumbling poets.

“She’s a home-loving girl, but she loves high society’s whirl. She loves the Army but her heart belongs to the Navy.”

Such old-fashioned encomiums to “Miss Turnstiles” Uncle Kent’s belching neighbor might have recognized from the musical extravaganza On the Town. Quaint, you might say. But every generation gets the Miss Turnstiles it deserves, and if Jenny Prediger spoke for this present generation, high its standards flew indeed.

Ushered into the doctor’s office at last, Uncle Kent made his case.

“Do you know what an earworm is?” he asked.

The puzzled doctor, pale and distracted, glanced up from his brittle charts.

“It’s like a song you get stuck in your head on a loop,” Uncle Kent patiently elucidated. “I noticed a couple of months ago I was starting to get them every day.”

The doctor showed about as much interest in Uncle Kent’s predicament as Mia Farrow’s terrible doctor when she was magically imbued with Satan’s spawn in the powerhouse film “Rosemary’s Baby,” which to this very day retains its ability to give the spine a tingle. Sure, all of us like to think that if we were Mia Farrow we would take one look at say, “That’s Charles Grodin! He always plays a bumbling oaf. Get me another obstetrician, pronto!” But hindsight, as they say, is twenty-twenty: a medical expression with which even Uncle Kent’s doctor might have been familiar.

As Uncle Kent continued to explain his symptoms, the pale doctor with curiously rosy cheeks perused his meaningless statistics, biting his lips like a nineteenth-century Parisian whore.

“On July fifth I had ‘Beat It’ in my head,” said Uncle Kent. “And on July 20th I had ‘Eat It’ by ‘Weird Al,’ which is like a parody of that. It lasts all day. If I’m alone with my thoughts, basically the song will be in my head.”

The doctor responded with a useless query of the most desultory kind, on the subject of Uncle Kent’s previous and unrelated visit. When they were handing out bedside manner he must have been in the crapper, as the witty saying goes among the vulgar of the back alley, quite perceptive in their way.

“What I’d like you to do right now, I’d like you to follow this finger,” the doctor said at last. Uncle Kent breathed a sigh of relief. This was all he wanted: the assurance that only practical and quantifiable medical tests could provide. In a world fraught with soul-endangering compromises, it was the least he could ask.

“Follow this finger. Relax and just focus on my finger.”

And so began the eternal dance. Doctor and patient? Say rather Dracula and victim! To paraphrase that same Robert Burton with whom the present chapter began, a doctor does slowly what the hangman accomplishes in a flash.

“Puckish” is not an adjective often associated with those grim stalwarts of the medical brotherhood, but one could not help but think of Robin Goodfellow himself as the doctor began to provoke Uncle Kent to the rigors of a merry chase.

“Up and down, up and down. I will lead them up and down!” So saith Puck to his master Oberon in the old tale. And Uncle Kent was just as baffled as the entranced Lysander, his cadaver-hued caregiver putting him through the most extreme example of “follow my finger” in the annals of medical history.

Marching back and forth in the hallway outside the examination room, his finger aloft, he put Uncle Kent in mind of Dan Aykroyd from the classic film “The Couch Trip” in which a scoundrel pretends to be a psychiatrist and learns a little something about himself in the process.

But trust is the paste in which society is so stickily bound. Sometimes to its detriment, a cynic might say.

But Uncle Kent’s faith was rewarded when the doctor bade him stare at a representation of a bearded demon, the red dot on its scaly nose Uncle Kent’s intended focal point. The doctor’s mastery of the optical sciences was made clear as he flipped the frightening representation to its blank side. Blank save for another red dot, that is!

For in the afterimage that had imprinted itself on Uncle Kent’s suggestible retina, the scaly demon seemed verily to move his mouth. Was it trying to tell him something? How often we mistake our common physiological reactions for revelations from beyond! Why, that is no Savior’s face on your slice of toast, however nice it might be to think so. Just eat your toast and be grateful for its sustenance. This is the lesson the kind doctor was trying to teach.

Alas, Uncle Kent was not ready to listen.

“No, I have to San Diego for work,” said Uncle Kent.

Before you cast a disapproving eye, stop and ask yourself: how often have you, dear reader, put off a visit to the neurologist
for similar reasons? And if not a neurologist, a podiatrist, or a kidney doctor? In Uncle Kent’s walk of life, “The show must go on”
remained the Golden Rule, as it had since the days of the Roman circuses. Do you suppose Spartacus ever called off a gladiatorial combat because he had to see a neurologist? There will be time enough for neurology after he captures Woody Strode in a net and pokes him with a deadly trident!

Uncle Kent’s job — drawing that fluffy miscreant Cat Agent — was hardly as lethal. But his commitment to it was just as unwavering and — dare we say it? Courageous.

“I have two panels and a signing I have to do,” said Uncle Kent.

“I cannot recommended that,” the pink-and-white doctor — who resembled nothing so much as a life-sized jolly rag doll
to be won on a carnival midway, and when you wake up in the middle of the night it’s sitting on a chair in your dark bedroom and you forgot what it is and start screaming — insisted.

“Maybe you could give me some Xanax or Klonopin,” Uncle Kent thoughtfully suggested. And these were not bad suggestions at all! His only hope at the time was to quell the unwelcome “earworm” that wound its hypnotic and ever-tightening coils around his days and nights. A worm? Perhaps python was a more fitting name. Anaconda! Holding back bitter tears, Uncle Kent recalled “Anacondas: The Hunt for the Blood Orchid.” “I guess Joe S. hates that too,” he said.

“What?” said the doctor.

“Nothing, nothing,” said Uncle Kent.

“Drugs are not going to fix this,” the doctor said, suddenly curt and dismissive. Was it the mention of Joe S.? Just how far did that powerful director’s tendrils reach into every corner of the city? Was Uncle Kent being paranoid? Well, that’s what they said to
Mia Farrow in “Rosemary’s” Baby, too! Uncle Kent’s doctor departed as swiftly as Jove on any thundercloud.

“Maybe he has to get to the golf course, ha ha,” said Uncle Kent, purposely playing on a common misconception about lazy physicians. But such jests were only a cover for the panic that threatened to overwhelm it.

We are advised not to bottle things up, but sometimes that is the only option. Uncle Kent had fans he could not disappoint. So on to San Diego, the fabled land of Comic-Con, as glistening with sugar-candy daydreams as any Oz! Little could Uncle Kent suspect that an earworm would soon seem like a cakewalk compared to the unthinkable devastation soon to follow.

No mere doctor of the human physique could save him from what was coming next.