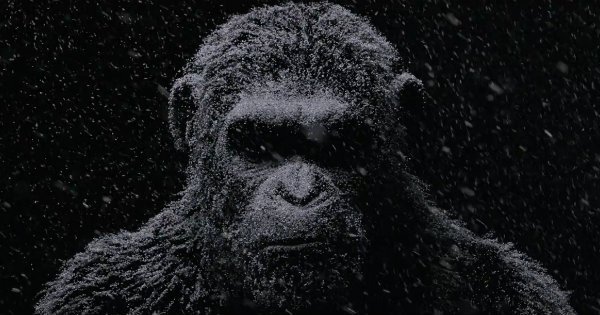 Ahead of its panel today at New York Comic Con, a new teaser for “War for the Planet of the Apes” has been released by 20th Century Fox.While no actual footage of the new film is included, the 30-second digital billboard shows Caesar (Andy Serkis) materializing out of snow and warns, “You must go before the fighting begins.” The snowy ape then gets blown away after he states that “war has begun.”

Director Matt Reeves, Serkis and producer Dylan Clark will be in attendance today at the panel where they will share new footage – and hopefully a new trailer.

The sequel to “Dawn of the Planet of the Apes” is the third installment in the “Planet of the Apes” reboot. Per its synopsis, which was revealed last week, “Caesar and his apes are forced into a deadly conflict with an army of humans led by a ruthless Colonel. After the apes suffer unimaginable losses, Caesar wrestles with his darker instincts and begins this own mythic quest to avenge his kind. As the journey finally brings them face to face, Caesar and the Colonel are pitted against each other in an epic battle that will determine the fate of both their species and the future of the planet.”

“War for the Planet of the Apes” arrives in theaters on July 14, 2017. Check out the teaser below.

This Article is related to: Film and tagged Andy Serkis, Trailers, War For The Planet Of The Apes