If you can't tell if it's real, does it matter if it isn't? That's just one of the questions we have. 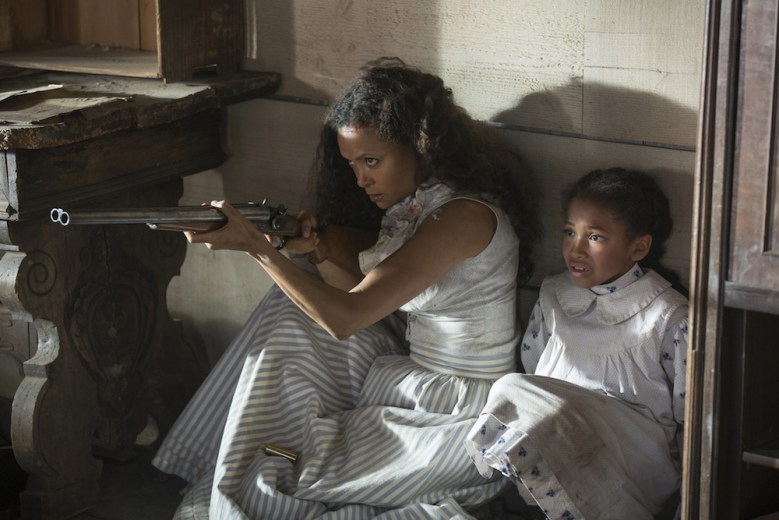 After getting to know our hosts last week, it’s time to learn a bit more about what it’s like to be a guest. Through the eyes of newcomer William (Jimmi Simpson) and his more boorish friend Logan (Ben Barnes), we go through the orientation process — or lack thereof — and also gain new insight into how guests get drawn into Westworld’s many ongoing narratives.

Those narratives, as designed by resident sociopathic Sizemore, might be starting to unravel on a host-by-host basis, with Dolores remembering more than she should and Maeve nearly getting decommissioned for her malfunctions. Bernard suspects sabotage, and we learn that he’s been secretly meeting with two different women. His reasons for hooking up with Theresa (Sidse Babett Knudsen) are pretty obvious, but what’s less clear is why he’s talking so much to Dolores — and asking her to keep their conversations secret.

William gets asked this question directly at the beginning of the episode and picks white — meanwhile, Logan goes black. Last week, the guests were relatively unimportant to the action, but now we’re getting to know more about the kind of people who spend so much money to visit the park. William so far seems interested in remaining true to a certain code, but we’ll have to see how long that lasts; how long he can keep that white hat clean.

In the Year… Wait, What Year Is It?

We get more confirmation from the Man in Black that Westworld is at least 30 years old (and thus 30 years ahead of us). But what seems notable at the moment, if only based on the excesses we see on display, is that there’s seemingly no scarcity of luxuries like tobacco and alcohol in this world. The year 2047ish appears to be a world rich with resources, at least for those who can afford them. This week’s most notable cut from the Mariposa Saloon’s player piano: Radiohead’s “No Surprises.” We don’t actually hear the song’s lyrics (“A heart that’s full up like a landfill / A job that slowly kills you / Bruises that won’t heal”) but it’s certainly an appropriate score for one of Maeve’s attempts at seduction.

Thanks to Bernard and Theresa, we get some evidence this week that the humans running Westworld are in fact human; wherever they’ve been stationed (for lack of a better word) seems pretty lonely, and it makes sense that interoffice romance might bloom.

Ed Harris is unexpectedly becoming the show’s de facto action hero (who saw that coming?), as the Man in Black continues to dig deeper than anyone into Westworld’s mysteries. There’s something, though, about these sequences that raises a basic question “Westworld” as a show will hopefully address soon — if there’s supposed to be no chance of a guest getting hurt, how can they make sure that there are enough stakes to keep said guest invested?

“I thought you couldn’t get hurt here?” William asks, to which his guide replies, “Only the right amount.” The mechanics that make this possible are still a bit vague, though. “I know you think you have a handle on what this place is going to be — guns and tits and all that. Mindless shit that I usually enjoy. You have no idea. This place seduces everybody eventually. By the end you’re going to be begging me to stay, because this place is the answer to the question you’ve been asking yourself.”
“What question?”
“Who you really are.”
— Logan and William

Always nice when a show takes a moment to highlight its themes (when a show is as dense and complicated as “Westworld”). Though Anthony Hopkins also does get a series of notable asides that reinforce his God-like self image. “Everything in this world is magic, except to the magician.”

The Questions You’re Not Supposed to Ask

One of the catches that comes with having a fantastic ensemble cast is making sure the show feels balanced, and with these first two episodes, we’re seeing signs that week-by-week, certain players will take greater precedence over others.

James Marsden and Evan Rachel Wood both take a bit more of a back seat in “Chestnut.” But while Thandie Newton, one of the show’s most notable stars, didn’t get a ton to do in the premiere, she more than makes up for that. Not only is Newton asked to create a subtle range of nuances to Maeve’s client interactions, but her bone-deep terror at waking up in the “body shop” made for one of the show’s most chilling sequences yet.

What’s most intriguing about “Westworld” is that the imperfections of this world are profoundly tied up in its mysteries. It’s tempting to get hung up on trying to solve them. But consider this remark from Dr. Ford, perhaps a meta-commentary on the show itself: “Guests don’t return for the obvious things we do, the garish things. They come back because of the subtleties.” And the subtleties of the show, so far, are worth appreciating.