Season 1, Episode 3 brings us new insight into the park's origins, along with some fictions based in truth. 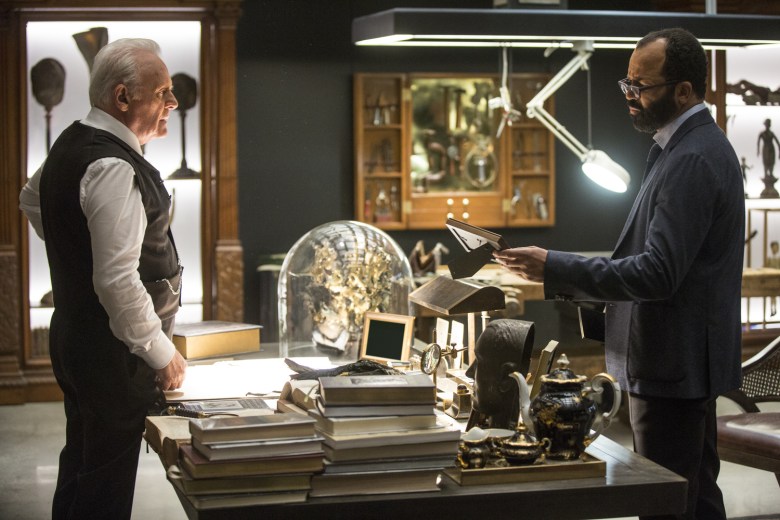 We begin with a very private book club meeting between Dolores and Bernard, who’s apparently been giving the host books to read, with this week’s selection being “Alice’s Adventures in Wonderland.” Dolores in general seems to be changing — and more importantly, remembering the things that have happened to her in past loops. Perhaps that’s what pushes her to start wanting more with Teddy, the fact that she’s just now becoming aware of the fact that things can change.

It’s here in Episode 3 that we get a more solid understanding of the loops that drive the established regular narratives — at this point, we’ve gotten used to familiar lines like, “Just trying to be chivalrous” and “Ain’t much of a rind on you.” But we’re also seeing more and more evidence of hosts deviating from the path, including a literal “stray” whom Elsie and Stubbs are sent to track down.

Meanwhile, our friends from last week, William and Logan, finally begin to really explore the adventure available in Westworld, which escalates in this episode with the beginnings of Dr. Ford’s new narrative, one that leads him to finally create a backstory for Teddy. But it’s a terrified gun-toting Dolores who comes across William and Logan — and she’s just overcome her programming for her first kill.

In the Year… Wait, What Year Is It?

We get even more glimpses of the technology working under the surface of this slick future world, including close-ups on touchpads and a look at the first-generation robotics technology developed by Ford and his now-deceased partner. The one thing that feels off is the idea that screens would still be so much a part of technology — we’ve seen occasional glimpses of head-up displays, but not nearly to the extent that one might expect.

No particular tracks stood out this week (if you caught something particularly clever, let us know in the comments), but it’s notable that Dr. Ford’s office is clearly the nicest in the facility, with his very own host pianist on call to tickle the ivories. James Marsden as Teddy and Evan Rachel Wood as Dolores.

Teddy and Dolores get their most romantic moment yet in “The Stray,” along with the narrative’s explanation as to why they’ve never become a couple — Teddy’s vague backstory contains a burden of guilt. “I’ve got some reckoning to do before I deserve a woman like you,” he tells Dolores, but never offers any specifics.

That said, now Teddy does have a more specific backstory… one that might provide him the reckoning he needs to be with Dolores? If you ask either Dr. Ford or The Man in Black, they’d tell you that’s crazy talk, because that’s not the purpose of Teddy’s character within the narrative. But all that changes once Teddy stops being a slave to the storyline.

With William’s first real gunfight, we finally get around to addressing a major gameplay issue we’ve been wondering about: How exciting can Westworld be, if you’re in no danger of getting hurt there? Today, we learn that while a host’s bullet won’t be able to penetrate a guest’s skin, it will knock you back; William ends up on his back as a result of the impact. Or, in Logan’s words, “You can’t get killed… but it wouldn’t be much of a game if they couldn’t shoot back.”

(Yes, we’ve seen The Man in Black take his share of bullets without being all that affected, but he’s also been playing the game for 30 years. Presumably, he’s gotten pretty tough.)

We also learn that not all the hosts have the approval to use weapons, which is why the Stray’s camp can’t chop any wood and why Dolores can’t pull the trigger during Teddy’s shooting lesson.

The repeated overhead shots of Dolores (and last week, Maeve) waking up in bed are intriguing if only because of what they represent about the nature of the loops in which our hosts live.

Also, for those who have been suspecting that we’re on another planet — wherever Westworld is, it seems to have the same constellations as Earth. That could be an artificial construct, but it’s still an interesting clue.

The Voice of God Last week’s episode ended with Ford gazing out upon a steeple with a cross on top of it, and this week we learn that the main villain of Ford’s new story, a former soldier named Wyatt, thought he could hear “the voice of God.”

Turns out, that’s not Ford being poetic — Ford is instead building this new narrative on the story of Arnold’s attempt to create consciousness in the hosts, which was based on the (in Bernard’s words) debunked notion of bicameralism. There’s plenty to read about this very real theory, but the short version of what happened to Westworld when Arnold implemented this theory is that the hosts went crazy, because they could hear their own programming, and interpreted it as divine communication.

“Westworld” seems to almost be taking for granted the religious themes inherent in this premise, but that isn’t stopping them from finding some unique angles to explore them.

“People like to read about the things they want the most and experience the least.”
— Bernard

Addressing Dolores’ astute observation that the books Bernard brings her to read have mostly to do about change, Bernard also offers up new understanding of where he is emotionally at this point in time. There’s something about Bernard that clearly feels trapped, whether it be his circumstances or his grief. (Shout-out, by the way, to the brief appearance by the always amazing Gina Torres.) We have yet to get real insight into what he’s doing, meeting in secret with Dolores, but whatever it is may have an end goal of addressing that issue.

The Questions You’re Not Supposed to Ask

The last 20 or so minutes of “The Stray,” in general, are probably the most violent and grotesque of the show to date — between the battle with Wyatt’s marauders, the Stray bashing his own brains in and Dolores shooting Rebus dead after an attempted rape. Even for the most inured, there’s still some shock value.

There’s also, frankly, more drag than in the previous two weeks, thanks to some exposition dumps that do bring a new level of enlightenment to the show, but don’t move as briskly as they might. (Anthony Hopkins and Jeffrey Wright are both amazing actors, but neither of them would be described as “fast-talking.”)

The ideas remain incredibly intriguing, but this week felt a bit more like work than we’d like. Hopefully the pace picks up in weeks to come.