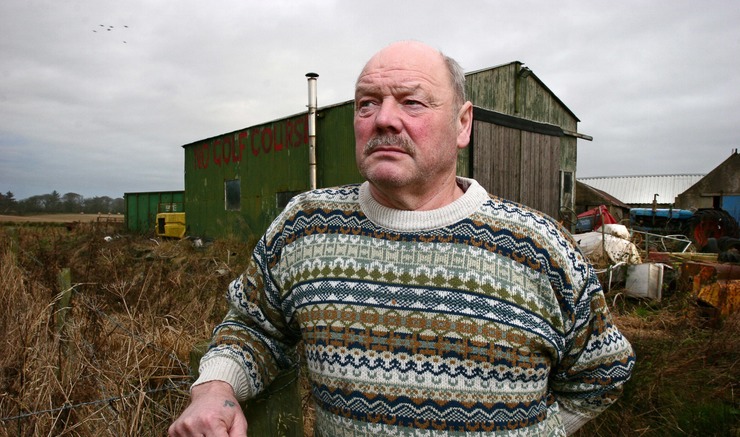 “You’ve Been Trumped Too”

The film was called “You’ve Been Trumped,” and while its title was intended to address the untold millions of people who’ve been victimized by America’s handsiest “billionaire,” it was angled more directly at one victim in particular: Michael Forbes. The most outspoken and inconvenient of the landowners who refused to sell their property to the real estate tycoon who helicoptered onto their backyard (“the little people,” as Donald Trump Jr. refers to them), Forbes quickly became a thorn in Trump’s side, a pea beneath his gold-encrusted mattress. Trump is notoriously difficult to unsettle, but this part-time salmon fisherman managed to slip right under his nuclear orange skin. In fact, the Donald was so offended by the sight of the Scotsman’s rustic family home (“The man lives in garbage. He’s a pig”) that he immediately began digging up the ground around the “pigsty,” cutting off Forbes’ water supply in the process. Of course, when the paunchy plutocratic learned that he had inflicted such grievous harm upon a hard-working native and his elderly mother, he did everything in his power to make things right.

Just kidding. Five years have passed since Baxter released his film, and Molly Forbes — Michael’s 92-year-old mother — still has to use a wheelbarrow in order to fetch her daily supply of water from a stream near her (perfectly normal-looking) house. This, despite the fact that Trump’s local mouthpiece had promised to install “the best water system that the Forbes’ have ever had.” This, despite the fact that Trump once went on television and declared that “Molly Forbes reminds me of my mother, if you want to know the truth.”

Alas, the truth is something that Michael and Molly Forbes know all too well. The truth is that things haven’t been going so well over at Trump International Golf Links. The truth is that the facility has only filled 100 of the 6,000 jobs it promised the community in exchange for destroying their environmentally protected coastline, and that the project’s completion inspired more than 500,000 people signed a petition seeking to ban Trump from re-entering the United Kingdom. The truth is that the fate of the Forbes family and their neighbors was a glimpse of what might be in store for the rest of us after November 9.

Unfolding like less of a sequel than it does an expansive follow-up to a local news story, Baxter’s new film tries to bridge the gap between one family’s personal hell and what it could portend for the average American citizen on the other side of the Atlantic. Timely and opportunistic in equal measure, “You’ve Been Trumped Too” is first and foremost a hit-piece on a presidential candidate, an entertaining work of agitprop that recognizes how voters are swayed by individual case studies more than they are by abstract arguments.

Threaded together on the strength of Baxter’s non-stop narration, this well-shaded portrait of cartoonish evil is a tasty casserole of vérité miserablism, damning archival footage, and Michael Moore-style confrontations. But where Moore’s recent “Trumpland” was happy to let the power-hungry plutocrat dig his own grave, Baxter shoots to kill, lining up his prey like he’s Donald Trump Jr. taking aim at a defenseless elephant.

And when the director locks on to a target, he doesn’t miss very often. Even for those of us who have spent the last 18 months watching this sideshow spill onto the international stage, “You’ve Been Trumped Too” is laced with enough maddening new material for it to feel like a valuable addition to the most hollow house of cards in the history of American politics. The way that Baxter connects the Forbes’ plumbing situation to the water crisis in Flint, Michigan is especially damning — it singlehandedly justifies the film’s didactic approach to polemic, preemptively atoning for the bit where Baxter cross-cuts between a Trump rally and a church mass like he’s Francis Ford Coppola. He further bolsters his attack with some unsurprisingly horrifying footage of Trump Jr., and — perplexingly — candid video of Trump preparing for an interview with Baxter that we never really get to see.

It’s one of several critical moments at which “You’ve Been Trumped Too” feels forced towards anti-drama, and Baxter’s attempts to pave over the problem amount to overcompensation. There’s some cheeky fun to the idea of sending Michael to the RNC (complete with a kilt that his niece knitted for him), but such protracted fish-out-of-water sequences lack the specificity at the heart of the Forbes’ story, and tend to feel like watered down versions of an art form that’s much better off in the giddy paws of Triumph, the Insult Comic Dog.

The film regains its footing when it returns to Scotland, and the Forbes’ ongoing plight. These tremendous, tremendous people seem so far away, and yet it’s clear that — if Trump were to be elected — we would all be the Forbes family, and America would be Trump’s new golf course. Perhaps that’s the lesson of a doc that, like “Trumpland,” may not otherwise seem to have any lasting value once the ballots close next month: The problem with running a country like a business is that it makes it much easier for everyone to go bankrupt.

“You’ve Been Trumped Too” opens in theaters on Friday, October 28.

This Article is related to: Film and tagged Donald Trump, Reviews