The inventive and cinematic repurposing of old footage and photographs breathes emotional life into these award contenders. 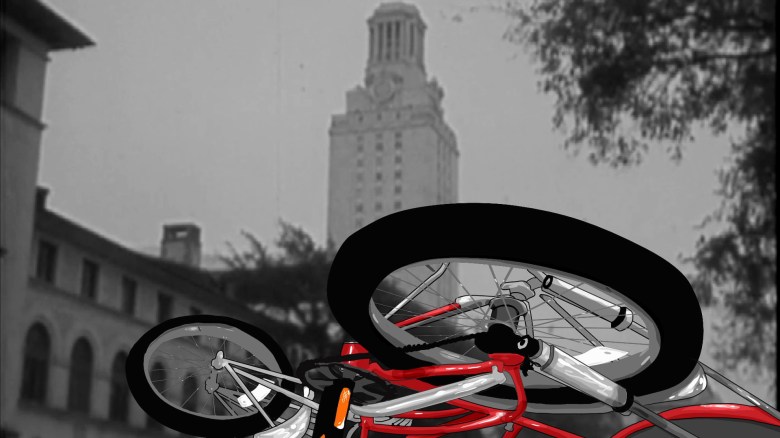 However, there is another way. Here’s four Oscar-worthy documentarians who found innovative ways to repurpose the past.

For 96 grueling minutes in August 1966, a sniper perched atop a tower in the middle of the University Texas held the Austin campus hostage, eventually killing 16 in America’s first mass school shooting. To place the viewer inside this terrifying experience, director Keith Maitland cast actors to read eight survivors’ accounts, as if being interviewed for a documentary, while also having them perform in a cinematic recreation of the events as if he was shooting a fiction film. He then rotoscoped the reenactment footage, turning the live action into animation.

Through the Texas Archive of Moving Image, Maitland had also gained access to 16mm footage captured by three different newsreel cameras. The grainy black-and-white footage wasn’t an obvious match to the dreamlike rotoscoped animation, but Maitland believed it would work.

“That footage is very evocative,” said Maitland. “They capture the chaos, anxiety, and the fear that was on the ground that day.”

Since the cameramen needed to protect themselves from the sniper’s line of fire, almost all the footage is almost all long-lens or wide-angle shots, which had a removed quality. However, that was the opposite of Maitland’s immersive approach.

“I realized that when you shoot coverage of an event like this, as a director, you have your wide shots, mediums and close-ups,” he said. “So when we started shooting these recreations, we actually laid out the archival in a sequence.”

Maitland cut the archival against a voiceover scratch track, then storyboarded the rest of film around archival shots already in place.

The archival footage also helped Maitland ground his animated re-enactments in reality. “[It] helps you recognize that this is not fantasy,” he said. “Even though animation has a fantastic quality to it, this is very much a real scenario that unfolded and it’s horrific and emotional and active.”  Playing upon this mix of reality and dreamlike memory also allowed him to seamlessly incorporate black-and-white footage.

Maitland recalled, “There was a moment where the police officer was driving to campus and he [said], ‘Most of the time when a lawman gets there, the shooting is finished, and that’s what I figured.’” Maitland realized he had archival footage of people hiding behind cars and trees, which he could use to ground the viewer in the cop’s point of view and establish his snap realization that this was an ongoing event.

One of the key missions of Ava DuVernay’s new Netflix documentary “13th” is showing how America’s current mass incarceration crisis directly links to the aftermath of the 13th Amendment, which ended slavery. The film makes a powerful argument that an evolving pattern of oppression has kept African-Americans enslaved.

READ MORE: ’13TH’ Review: Ava DuVernay’s Netflix Documentary Is the Most Relevant Movie of the Year

Sharp and pointed analysis from numerous experts supplies historical and intellectual context, but writer-producer-editor Spencer Averick said archival footage needed to do more than just show history. “We’re exposed to millions of images every day, and whether we know it or not, it has an influence on our way of thinking, usually on an unconscious level,” he said. “So in the film we use archival to show and analyze the media’s use of imagery and its effect on the way we perceive each other.”

Averick says the film was able to make cinematic connections because events like Civil Rights movement happened in the open and were well documented. And with financial backing from Netflix, “13th”could access expensive footage. That allowed Averick to create moments where footage from different eras had kinetic and cinematic connections as well as contextual ones.

There’s no better example of this than the “law and order” montage. “We were already knee-deep in the documentary and had watched countless hours of Nixon saying, ‘We need law and order,’ right after the Civil Rights movement,” Averick said.

While working on this section of the film, Averick started hearing Donald Trump use almost the same language, while seeing footage from his rallies. Not only was there a connection in language, but also in movement, allowing him to create a visceral montage.

When ESPN first approached him about the project, Ezra Edelman didn’t want to make a film about O.J. Simpson. He didn’t sign on until he realized that the long-form documentary format would allow him to use the tragic arc of Simpson’s life to explore race in America. As Edelman explained on IndieWire’s Filmmaker Toolkit podcast, he wanted his audience to understand why African-Americans cheered when Simpson was acquitted, or why Simpson’s fall from grace felt so shocking to white America.

To achieve this, Edelman and archivist-producer Nina Krstic turned to B-roll to create the A-story, and this clip from the film is a perfect example. “Made in America” had plenty of interview subjects who could explain how Simpson had separated himself from the Civil Rights struggle of the late 60s and was more concerned with creating a unique brand. But instead by crosscutting between the Bob Hope hosted event for Simpson and key moments from the Civil Rights struggle, the viewer can feel the schism, rather than be told about it.

The mountain of archival footage in “13th” and “O.J.: Made in America” are only possible when backed by deep pockets. Raoul Peck has spent his career taking innovative approaches to working within limitations, and for “I Am Not Your Negro” he took advantage of Fair Use exceptions and got his hands on whatever images or video he could use.

Working off a “libretto” of James Baldwin’s 1979 unfinished final novel, Peck created a visual meditation on what it means to be black through a writer’s journey that revisits the lives of three friends and Civil Right leaders: Medgar Evers, Malcolm X, and Martin Luther King, Jr.

READ MORE: ‘I Am Not Your Negro’ Teaser Trailer Draws Direct Line From Civil Rights Movement to #BlackLivesMatter

Needing to bend the archival footage to fit the personal and subjective experience of Baldwin’s words, Peck said he learned a great deal from studying how Chris Marker could create so much cinema with just a photograph.

“He could create a whole feature film with five photos,” said Peck. “[He could] go inside of the photo and take everything out of the photo, all the different stories the photograph tells. Great photographers sometimes find the frames that tell the most incredible and dense stories possible. It’s never just one story, it’s the tension between those stories. Sometimes it’s the person looking to his left, you follow the gaze, and you discover something else. You create another level of understanding of the photo. And the speed you go from one side of the photo to the other side, that can tell two different stories.”

“Whether it’s fast, or it’s a slide, or it’s slow motion, it’s an art to tell a story well with just one photo,” he said. The key for Peck was finding ways to make old footage feel new. With 1960s footage of police clubbing African-Americans and using dogs, Peck colored the footage to force people to engage rather than feeling like they already know this part of Civil Rights history.

And to allow the audience to see the human side of men like King, who are often perceived as larger than life, Peck used photos of King with his family intercut with King in a car, reaching out to touch the hands of admirers. The result is a sense of visual intimacy.

“That’s the magic,” said Peck. “If it was just about illustrating Baldwin’s words, the film would have been totally boring. It’s always about creating, with the mixture, not only the image, but also the words, the sound, the sound effects, the music, and sometimes the silence, you create something totally different and sometimes it’s the third layer, the fourth layer, and you play with that as you transition to the next sequence. When you take the sound over to the next sequence, or when you cut it into silence before you transition, you are saying two very different things.  Either you are carrying an emotion or creating a new one.”

Peck says this mindset leads to endless possibilities, but that to capture the essence and the deeper meaning of the scene it takes exploring virtually all of them.