From "Luke Cage" and "The Grinder" to "Divorce" and "American Crime," a panel of TV critics weigh in on which shows may be snubbed this year. 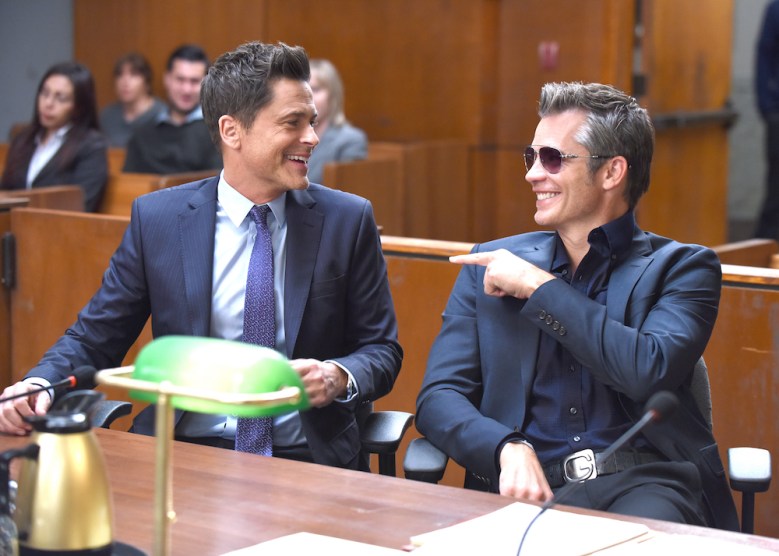 This week’s question: What is one of the best shows of the year that you think will be snubbed/overlooked when it comes to the Top 10 Best-of lists for 2016?

As much as I’d like to point to an early year entry like “Bloodline” Season 2 (far better than Season 1, thanks to the improved structure) or “The Path” (Hulu’s most complete offering to date), I’m going to make the case for “Divorce.” I feel the HBO drama — “black comedy” could fit, too, but the show’s highest merits lie within its emotional substance — may be overlooked simply because too many critics (and viewers) find it hard to return to, week after week. Be it my continued endorsement of “no pain, no gain” TV shows or simply my higher tolerance for the titular life event that hasn’t affected me personally (yet), “Divorce” is a standout story filled with engaging, all-too-real characters. Insightful moments pop up more often and burrow more deeply in each half-hour entry than in most hour-longs out there, and Thomas Haden Church has proven himself yet again to be one of our finest character actors. Come for Sarah Jessica Parker — who kills, by the way — and stay for the brutal truths.

Canceled shows always get the short shrift on these types of lists. “The Grinder” was too good for us and too good for Fox. (No, I’m not still bitter about its cancellation. OK, maybe just a little.) It was never going to be for everyone, but it was the perfect TV show for TV obsessives — a smart, layered, ambitious and clever inside joke — and worked because it completely embraced its absurdity. Its cancellation was totally not justified.

I have three shows I bet won’t get the love they deserve in year-end lists. Netflix’s “Luke Cage” goes here because it is a near-perfect homage to the Blaxploitation movies that helped inspire one of Marvel’s oldest and best-loved black superheroes, updated with hip hop swagger and the explicit vision allowed by streaming video. But because it’s a superhero series which isn’t perfect – I hoped for more formidable villains, for instance – it may get overlooked for the “GOT”s and “Westworld”s out there. Showtime’s “Billions” is here because it is the best TV series about the gargantuan egos powering both high finance and high politics in New York City, anchored by powerful performances from Paul Giamatti and Damian Lewis. But the show airs in January – an eternity ago, for those picking best-ofs in December – and it’s easy to dismiss as a soap opera set on Wall Street. Finally, ABC’s “American Crime” is most likely to escape notice, and not just because it shares a name with FX’s amazing O.J. Simpson limited series. Creator John Ridley brought a second season that lived up to the promise of its first, telling the story of a sexual assault among high school students in a manner that leverages class, race and sexual orientation issues in unexpected ways. But because it also aired at the start of 2016 and there’s a Goliath of a cable TV show called “American Crime Story” that has gotten so much more attention, I have a feeling critics will overlook ABC’s criminally under-watched gem. Louis CK’s “Horace and Pete” — a 10-episode series of filmed plays about a family-run Brooklyn bar, starring CK, Steve Buscemi, Alan Alda, Edie Falco, and Jessica Lange — arrived early in the year with no advance hype, or even info, just an email to his LouisCK.net subscribers saying, “Go here to watch it. We hope you like it.” With no early promotion, no screeners, and no way to watch without paying to download each episode, “Horace and Pete” had an uphill climb to even get looked at by critics. And despite rave reviews from a handful of us, its last episode premiered nine months ago. In Peak TV, recency bias plus a show many critics simply didn’t see means I don’t expect to see it on many Top 10 lists, even though it’s going to be very high on mine.

For me there are two shows I worry will not get the due they deserve. Cinemax’s “Quarry” is one I hope is not overlooked, as show creators and producers Michael D. Fuller, Graham Gordy and Greg Yaitanes got Vietnam right, recreating war scenes from the smallest details to the larger theater of war itself, with the help of superb below-the-line craftspeople like production designer Roshelle Berliner and prop master Beau Harrison. They turned a set in New Orleans into a seamlessly authentic looking early ’70s Vietnam. The ensemble casting that includes Anne Dowd, Logan Marshall-Green (Mac Conway) and Jamie Hector deliver award-winning performances in this compelling new drama.

The other dramedy I fear might be overlooked is “Better Things” from FX, which sets the tone from the opening song “Mother” by John Lennon, Pamela Adlon’s subtle but powerfully funny and bittersweet look at a single mother’s life sandwiched between two generations of loved ones – an early stages neurologically faltering mother and a whip-smart middle child in the throes of gender confusion – emotionally rips your guts out while making you laugh.

Adlon’s character Sam is trying to do all of this and hold on to her sexuality and preserve her sanity as the only one in the house with the biggest shoulders to carry all the responsibility and financial burdens.  Specifically what resonates for me are the relationships played out by Pamela’s Sam and her middle child, rising star Frankie, Hannah Alligood and also with her mother, Celia Imrie (Phyllis) which are perfectly wrought. Bonus points for working Lenny Kravitz (Mel Trueblood) in as a guest star; he was great.

I have to mention the show I’ve picked because it should be in my Top 20, but I keep forgetting it even exists, largely because I don’t really watch anything else on the network it’s on. The fourth season of A&E’s “Bates Motel” aired two or three of the strongest hours of TV drama I watched this year — especially its chilling, strangely beautiful penultimate hour — and it really underlined how a show that struggled quite a bit in its first season has sneakily become a series well worth watching. I don’t really know anybody else who’s watching this, outside of a couple of other critics, but I hope that its upcoming fifth (and final) season will make the buzz roll in, so people catch up with this one. It’s on Netflix! You can probably skip Season 1! I would suspect Fox’s adaptation of “The Exorcist” will be denied Best Of love this season and that is a damn sin. I was initially skeptical of the idea, since A) the film is perfection and B) horror on network TV ain’t so easy. But from jump (or should that be jump-scare?), executive producer Jeremy Slater’s gutsy new take cloaked its story of  Chicago family bedeviled by a possible possession in murky dread, suspense and bone-deep eeriness. But more than the terrific atmosphere, “The Exorcist” pulled off one hell of a shocker with its mid-season reveal [SPOILER] that Angela (Geena Davis), the mother of this iteration’s demonic case, was actually the adult Regan MacNeil from the original film! Pair that with a mythology involving high-society satanists, two wickedly flawed men of the cloth (Alfonso Herrera, Ben Daniels) and emotional, yet restrained turns by both Hannah Sakulka as the possessed Casey and Brianne Howey as her traumatized sister, and you have a worthy, often terrifying addition to the “Exorcist” canon that compels me to sing its praises.

I think there are two ways to read this question. The first is, “What is a show that I know I’ll have in my own Top 10 that I fear other people won’t have because they’re not as [choose adjective] as I am?” If that’s the reading, I’m going to be ticked off by every critic who decided that a 7.5 hour sports documentary just wasn’t their cup of tea and never even watched ESPN’s “OJ: Made In America.” Boo. But a second way to read the question would be, “What is a show I’m already sad will be snubbed/overlooked on my own Top 10 list just because there’s too much great TV?” To that question, I’m already lamenting that the second season of “American Crime” just won’t make my Top 10 cut, even though the ABC anthology drama made a huge leap in its second season. The last third of the season became something a bit too muddled and conventional for me, but that doesn’t negate creator John Ridley’s provocative ambition, nor the spectacular performances by basically the full ensemble, led by Lili Taylor, Regina King and revelations like Connor Jessup and Joey Pollari. There’s just too much great TV.

“Murder in the First” was canceled after its third season aired on TNT this fall. This is a crying shame, because it was the best procedural on U.S. television. Co-created by Stephen Bochco, who in decades past was responsible for such classics as “Hill Street Blues,” “L.A. Law,” and “NYPD Blue”—and yes, “Doogie Howser, M.D.,” and “Cop Rock”—it belonged to the Bochcovian rather than Wolfian school of procedurals. That is to say it spent as much time exploring the private lives of the detectives as showing them investigating crimes. That doesn’t mean that the police stories were underdeveloped. Each season focused on one sprawling investigation—in Season 1, a Zuckerberg-like Silicon Valley tech-god may also have been a sex-murderer; in Season 2, a school-bus massacre was somehow connected to a drug boss and potential corruption inside the San Francisco Police Department. In the third and final outing, the crime—a “Law & Order: SVU”-like mashup involving the worlds of sports and music—was overshadowed by a wonderfully twisty storyline involving the slimy district attorney. “Murder in the First” exemplified the sort of complicated, ambitious storytelling that routinely gets overpraised when it airs on HBO. Taye Diggs and Kathleen Robertson were magnificent as Homicide Inspectors Terry English and Hildy Mulligan—and the excessively complicated plotting that slightly marred the first two seasons was trimmed back this year. Season 4 would’ve been fabulous. In February 2015, I reviewed three “High Maintenance” episodes, distributed digitally during the series’ independent days, by saying that “‘High Maintenance’ should never, ever, ever be a TV show.”  But holy crap, creators Ben Sinclair and Katja Blichfeld proved me so very, very, very wrong, and I couldn’t be happier. In bringing the series to HBO, they managed to find a perfect approach to adapting their original concept — character-focused vignettes interconnected by the bike-riding weed dealer servicing New York — for a half-hour format, and it made for some addictive, engrossing storytelling. Unfortunately, six half-hour episodes might not leave that much of an impression, and the show’s quiet nature gives it a disadvantage against some of the louder storytelling that happened this year. But I will fondly remember it.

Other contenders: “Full Frontal With Samantha Bee,” “Gilmore Girls: A Year in the Life,” “Insecure,” “Search Party,” “Westworld” and “Younger” (all with 1 vote each)