We've picked out 13 of our most anticipated films from the fest, including some awards contenders, a handful of buzzy debuts and a number of festival favorites. 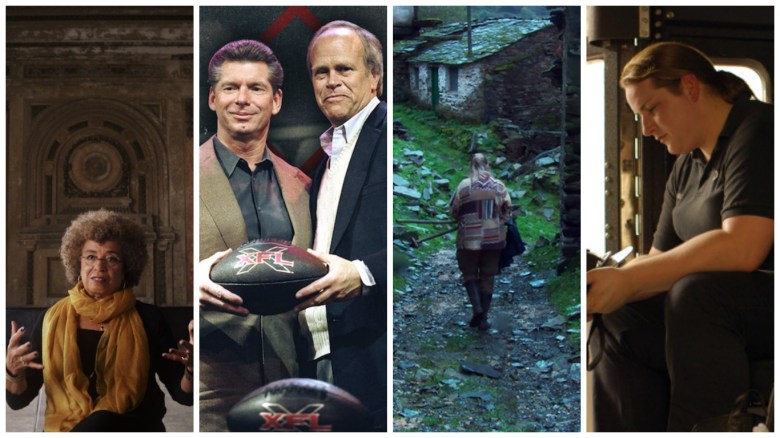 New York City’s annual DOC NYC festival kicks off this week, including a full-to-bursting slate of some of this year’s most remarkable documentaries. If you’ve been looking to beef up on your documentary consumption, DOC NYC is the perfect chance to check out a wide variety of some of the year’s best fact-based features.

Ahead, we pick out 13 of our most anticipated films from the fest, including some awards contenders, a handful of buzzy debuts and a number of festival favorites. Take a look and start filling up your schedule now. Kirsten Johnson’s “visual memoir” has already completed a starry trot around the festival circuit, kicking off with a lauded debut at this year’s Sundance Film Festival, but it still demands to be seen by a wider audience. Johnson made her bones as a cinematographer on a number of well-known (and well-loved) documentaries, from “Citizenfour” to “The Invisible War,” and she takes all of that experience and packages it inside a vivid, original documentary that’s as much about her personal life as it is her professional career. Using footage from her life and work, Johnson effectively and personally examines what it all means, how it all adds up and why we even film this stuff to begin with. Enormously touching and deeply felt, it’s a documentary like you’ve never seen before. -KE Haitian director Raoul Peck’s brilliant essay film fuses an unfinished James Baldwin manuscript with contemporary footage of the racist society at the center of his critique. Baldwin, a magnificent orator who outlived many of his peers in the Civil Rights era, never completed his ambitious philosophical treatise on the efforts of Medger Evers, Martin Luther King Jr. and Malcolm X — but Peck does his part to fill in the gaps, with an extraordinary editing strategy that weaves together footage of all three men along with Baldwin himself, whose words are read aloud by Samuel L. Jackson. However, few people may pick up on the actor’s usual cadences; he has delivered a genuine performance that resurrects the clarity of Baldwin’s voice. Peck’s filmmaking manages to evoke complex ideas about modern prejudices by establishing their history, proving that Baldwin’s arguments about unconscious bias resonate just as strongly today as ever. -EK “Cheer Up” is the kind of sports-centric documentary we so rarely see, thanks to one major difference from the rest of its mini-genre: The athletes it chronicles just, well, aren’t very good. Christy Garland’s funny, fresh and very original documentary follows Finland’s Ice Queens, undramatically billed as the country’s worst cheerleading team. The doc is concerned with what some might call a “rebuilding year,” as coach Miia boldly travels to the deep center of the cheerleading heartland — Texas, of course — to see what makes other teams so good and hers just so bad. The results are worth cheering. -KE “Jim: The James Foley Story,” is an intimate portrait of the American journalist and video reporter who was kidnapped in Syria in 2012 and murdered in 2014 by ISIS terrorists, who uploaded a video of his execution to YouTube. Directed by Foley’s childhood friend Brian Oakes, the documentary tells the story of Foley’s life through interviews with his family, friends and colleagues, some of whom reveal never-before-heard details about their time spent in captivity with Foley. The film serves as a unique window into the life of one incredibly brave and courageous war correspondent while also providing an on-the-ground view of America’s war with ISIS. “Jim” is Oakes’ second documentary after the 2015 TV movie “Living with Lincoln.” -GW Hot Docs and Full Frame selection “The Peacemaker” follows international peace negotiator Padraig O’Malley, an Irish-born recovering alcoholic who has spent more than 40 years brokering peace in some of the world’s most dangerous crisis zones. Though O’Malley has helped establish peace in places from South Africa to Kosovo to Ireland, he struggles to find inner calm, saying in the film that although he has been sober for more than a decade, he is “often concerned about the quality of my sobriety.” The Hollywood Reporter’s Frank Scheck called the doc a “deeply moving portrait of its truly admirable, complex subject.” “The Peacemaker” is the first feature-length doc for director James Demo, whose short film credits include the comedy “First Time Long Time,” starring John Savage, Karen Black and Amanda Plummer. -GW In 1988, a Santa Fe art gallery owner named Forrest Fenn was diagnosed with cancer. His first response, as it would be for any one of us, was to pack all of his most valuable belongings — including his unpublished autobiography — into a treasure chest and then hid that chest somewhere in the Rocky Mountains for someone to find after his death. Well, Forrest Fenn is still alive, and his treasure is still out there (and supposedly worth millions). Tomas Leach’s documentary feature debut chronicles the strange saga of Fenn’s prize, as well as several of the people who have tried to find it over the years. There are an infinite number of incredible stories that are buried in the vast swath of America that stretches between New York and California, and “The Lure” is a fascinating portrait of their enduring appeal, and this country’s inexhaustible possibilities. -DE Brooke Guinan is a third-generation firefighter, but she’s the first in her family — the first in the history of the New York City Fire Department, in fact — to be openly transgender on the job. Unsurprisingly, her transition hasn’t been an easy one: Not only has she had to struggle for acceptance in a traditionally macho field, but she’s had to take the same fight home with her, and convince her blue-collar blood relatives to embrace who she is and has always been. Directed by musician and “Aspie Seeks Love” filmmaker Julie Sokolow, “Woman on Fire” is a moving portrait of a New Yorker who’s never been afraid to run where she needs to go, regardless of the dangers that might be waiting for her on the other side. -DE Sometimes, there’s a tendency to assume that sports can be a cure-all, that the problems facing us in “the real world” vanish when the on-field action begins. “Forever Pure” shows how quickly that divide vanish, looking through the lens of the 2012 squad for Israeli soccer team Beitar Jerusalem. Director Maya Zinshtein looks within both the club and its supporters in the wake of the decision to hire a pair of Muslim Chechen players. With frank depictions of bigoted fandom and destructive mob mentality, it’s a testament to the overwhelming power and chilling momentum of a toxic type of ignorance. There are glimmers of hope for the team on and off the pitch, but Zinshtein wisely avoids framing the team’s story as an easy remedy against the issues that still plague our world over four years later. -SG

“This Was the XFL” “This Was the XFL”

Now, the one-season wonder XFL exists mainly as a cultural punchline, among the ranks of unnecessary updates like New Coke and lightning-fast fads Tickle Me Elmo. But it’s clear that the Vince McMahon brainchild football league, just one in a decades-long string of would-be organizations bent on dethroning the NFL, had more than twelve weeks’ worth of stories to tell. (The amount of behind-the-scenes decision-making that went into the marketing blitz alone seems prime fodder for a deep dive.) Directed by Charlie Ebersol, whose father Dick was another prominent figure in bringing the XFL to air, it’s the latest in the “30 for 30” ESPN sports doc series. Fifteen years after the league promptly fizzled on a such a prominent national platform, the time is right for one of the most no-brainer “30 for 30” subjects the network has ever taken on. -SG Ava DuVernay’s documentary “13TH” has the precision of a foolproof argument underscored by decades of frustration. The movie tracks the criminalization of African-Americans from the end of the Civil War to the present day, assailing a broken prison system and other examples of institutionalized racial bias with a measured gaze. It combines the rage of Black Lives Matter and the cool intelligence of a focused dissertation. DuVernay folds many historical details into an infuriating arrangement of statistics and cogent explanations for the evolution of racial bias in the United States, folding in everything from D.W. Griffith’s “The Birth of a Nation” to the war on drugs. The broad scope is made palatable by the consistency of its focus, and the collective anger it represents. -EK Do not let that runtime scare you off. Ezra Edelman’s already-award-winning features clocks in at a hefty 467 minutes, but every moment in his exhaustive look at the life, times and tremendous fall from grace of O.J. Simpson is well-earned. The film picks up during Simpson’s lauded college football career, contextualizing his place both in America and in the sport he excelled at, while also laying out a series of seeds that hint at the discord and tragedy to come. “Made in America” meticulously tracks Simpson through his most formative years, through the murder of Nicole Brown and Ron Goldman, “the trial of the century” and his life today. You may think you know O.J., but you’ve never seen anything like this. -KE

“Citizen Jane: Battle for a City” “Citizen Jane: Battle for the City”

If during DOC NYC you find yourself enjoying a stroll down through Greenwich Village or SoHo, take a second to remember Jane Jacobs, the woman who stopped Robert Moses from building the Lower Manhattan Expressway smack through downtown. The story of Moses has been told — most notably through Robert Caro’s 1300+ page biography “The Power Broker” — the titan who used his incredible power to build the impossible, including the BQE through residential neighborhoods in Queens and Brooklyn. Yet this documentary, made by journalist-turned-filmmaker Matt Tyrnauer (“Valentino: The Last Emperor”) shines a spotlight on Moses’ far less known advisory, a prescient urban planner and community organizer who successfully locked horns with the titan on the strength of her ideas and ability to express them. In addition to being a David versus Goliath story, “Citizen Jane” is also a fascinating look at urban planning. -CO With so many documentaries being crammed into seven days, DOC NYC isn’t just about catching up on the year’s most celebrated docs, it’s also an opportunity to discover hidden gems. One cinematic piece of nonficiton worth checking out is “Santoalla.” Martin and Margo wanted out of Amsterdam and to find a far simpler life living off the land. They settled into the remote dilapidated village of Santoalla up in the Spanish mountains. The city couple’s liberal hopes for life without rules and organic farming comes into sharp conflict with the longtime residents, the Rodiguez family. Then one day Martin disappears. The mystery aspect of the film gives the filmmakers the opportunity to delve into atmospherics, sometimes tapping on the gas a little too hard, but it’s nonetheless an exciting directorial debut by Andrew Becker and Daniel Mehrer. -CO

This Article is related to: Film and tagged DOC NYC, Festivals