Netflix's "Gilmore Girls: A Year in the Life" revival will catch up with a grown-up Rory on Friday, Nov. 25. 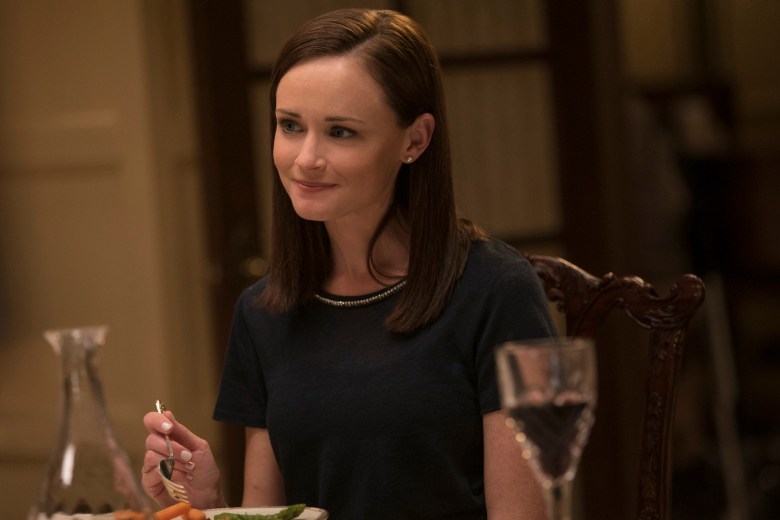 Although Rory Gilmore (Alexis Bledel) had her fair share of boyfriends on “Gilmore Girls,” she wouldn’t let them get in the way of her ambitions. Ultimately, she chose more life experience over marriage at the end of the series.

But now with Netflix’s revival “Gilmore Girls: A Year in the Life,” nearly 10 years have passed and Rory is back in Stars Hollow… and so are all of her exes. Over the course of four installments tied to each of the four seasons — winter, spring, summer and fall — we’ll see if Rory still feels sparks with any of them.

“We’re not supposed to disclose where we pick up with her romantic life, but all of her ex-boyfriends make an appearance in these chapters in one way or another,” Bledel told reporters in late July at the Television Critics Association press tour. “It was great to work with all of them again. I think people’s questions are answered by the end of it.”

Each of the exes was the guy that Rory needed at that moment in her development. They include the sweet and floppy-haired first boyfriend Dean (Jared Padalecki), literary bad boy Jess (Milo Ventimiglia) and the charming but entitled Logan (Matt Czuchry), whose proposal Rory turned down at her graduation party. It was good timing because right after, she was offered a job to cover the first Barack Obama presidential campaign for an online publication. Milo Ventimiglia, “Gilmore Girls: A Year in the Life”

Since then, her life has taken some unusual turns. “My character’s been working hard as per usual, but she’s on her own so she’s more focused on what she is trying to accomplish,” said Bledel. “She started her career in journalism at a time when the industry was changing quite a bit. Newspapers were going away and she has kind of been chasing stories and crashing on people’s couches in the process. So she’s not really rooted anywhere. She’s been traveling a lot.”

That itinerant lifestyle might explain why in the trailer Rory seems to have misplaced her underwear, as dramatized in this cheeky photo:

On the move. #GilmoreGirls #AYearintheLife

It remains to be seen if Rory is content with not having a home base or a proper place for her undies, but returning to Stars Hollow certainly makes her reflect on where she wants to go, especially after the death of her grandfather, Richard Gilmore (Edward Herrmann). Creator Amy Sherman-Palladino said, “The whole thing picks up six months after Richard’s passing. We delve into how that’s going to project them all into different life streams.”

The central relationship in “Gilmore Girls” of course is between Rory and her mother Lorelai (Lauren Graham), who was only 16 when she gave birth to Rory. Because of their closeness in age, their connection has been far closer than the usual mother and daughter.

“It was fun to play with Rory and Lorelai, who we always saw as best friends first and mother and daughter second,” said Sherman-Palladino. “We broke girlfriend stories, not mother-daughter stories. It was interesting to actually now play them as girlfriends who travel and talk on the phone and keep in touch the way I do with my friends. It’s just that they happen to be mother and daughter. It was more interesting. I think Alexis thought it was more fun playing Rory as a grown-up human being with the problems that come with being a grown-up human being.” But now Rory has developed a life independent of her mother for several years now, and that’s bound to have an effect on their dynamic.

Bledel said, “I think anyone who has a bond as close as theirs, a relationship that’s that closely knit together and you do have a lot of time apart, coming back together can put you through some different, a roller coaster of emotions, some transitions possibly, depending on how long it’s been. So in a way, it’s a great place to start because there may be things to work through, there might be things to celebrate.”

READ MORE: ‘Gilmore Girls’ Scott Patterson on Getting Back Into Character to Play Luke

Graham added, “I think appropriately, they’re doing their own thing a little bit more, but when they come together, it’s still super-gratifying but they aren’t maybe quite as attached because they don’t need to be. I’m interested in her life but I maybe take a little bit more of a step back. I think we have slight[ly] more separate journeys because she’s older and doesn’t need me in the same way. It would be creepy if she did.”

“Gilmore Girls: A Year in the Life” premieres all four episodes on Friday, Nov. 25 on Netflix.