Amy Sherman-Palladino’s revival on Netflix was an absolute delight through those crucial final four words, so let’s break down why getting there felt so good — and try to answer a few questions. 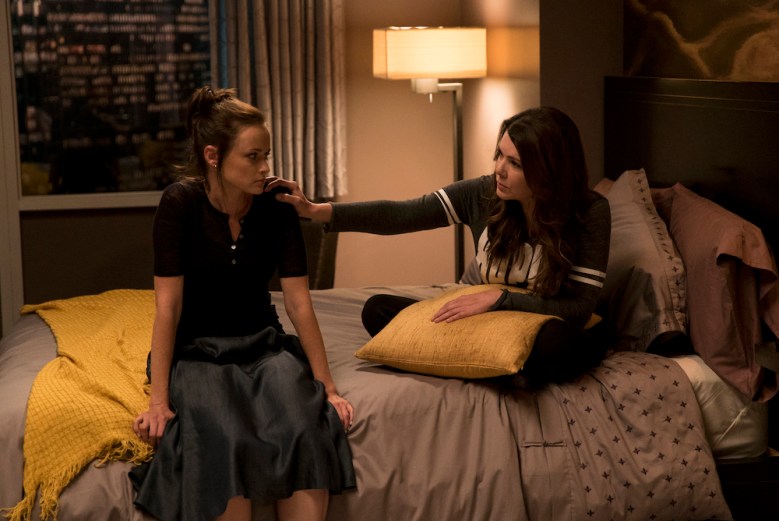 Rest easy, “Gilmore” fans. Netflix’s revival of The WB/CW classic should do the same for fans’ love, reviving warm feelings of old — and for good reason. Unlike other nostalgia-mining continuations, “Gilmore Girls” returns with enough novel ideas, authentic developments, and integrity of character to justify its existence, along with being pretty darn fun throughout.

And that’s quite a relief, since Netflix’s revival record is pretty spotty. As far as we can tell, each and every resurrected series — “Arrested Development,” “Longmire,” “Fuller House,” and “Black Mirror” — has proven successful in terms of viewership. (We don’t have actual statistics, but three of the four earned renewals, and production on “Arrested Development” Season 5 is always percolating.) But the quality varies drastically. From the ambitious highs of “Black Mirror,” the confounding middle-ground of “Arrested Development,” and the disastrous lows of “Fuller House,” subscribers simply don’t know what to expect when a new continuation pops up in their “Recently Added” section.

“Gilmore Girls: A Year in the Life” had a few things working to its advantage in this vein, but that doesn’t mean the nine-years-removed drama had an easy path to success. Fans may have been spooked by the formatting alone, especially anyone turned off by “Arrested Development’s” Season 4 restructuring. And the rest of the anxious fandom knows the world has changed outside of Stars Hollow since they last saw it, and making that “snow globe” community fit into our current social climate poses a unique challenge. “Gilmore Girls” represents an ideal in many ways, but we still need to believe in a plausible ending — or continued existence — for Lorelai (Lauren Graham) and Rory (Alexis Bledel). Amy Sherman-Palladino and Daniel Palladino manage to create a story that feels both fittingly current and just like the good ol’ days. Part of the former may come from an onslaught of pop culture references that feel completist in covering the years between seasons, but that’s an established element of the series, making each quick jab at Marvel movies and nod to David Cronenberg a nostalgic rush as much as a means to ground these new stories in the present. The transition is also aided by the fact the original seasons were captured in today’s preferred shooting style (single camera), and the characters had plenty of life left to live when Season 7 came to a close.

READ MORE: ‘Gilmore Girls’: 50 Questions We Had While Watching the New Netflix Trailer

[UPDATE: What has been a spoiler-free review up to this point will now fully delve into spoiler territory, so be warned: If you haven’t finished all four new episodes of “Gilmore Girls” yet, stop reading now, and come back when you’re done. Spoilers ahead.]

Now that Season 8 is wrapped, where does “Gilmore Girls” stand? To answer that, we need to work our way back through to the beginning of “A Year in the Life,” but we’ll start with that whopper of a cliffhanger.

So we’ve tackled the repercussions of those “final four words” more extensively here, but let us say right now: We don’t know if this is the end or the beginning. More specifically, we’re not sure if Netflix’s revival will continue or if it’s truly over. The cyclical nature of ending a story about an unmarried single mother on her unmarried single daughter’s pregnancy is somewhat fitting, but there seem to be too many balls in the air for the story to end here.

A brief list of the things we don’t know:

There’s plenty more to consider, but those big questions seem like plenty to fuel the belief that more “Gilmore Girls” is coming. Come on, folks. Keep the feel-good times rolling. So Let’s Talk About Rory

Throughout the new episodes, one thing is quite clear: Everybody is in love with Rory. I mean, this has pretty much always been the case for both Gilmore girls, but Rory’s college reunion embraced the insanity of the moment to justify them showing up in the first place. Fans wanted to see their favorite exes back for the revival, and — other than copping out with a dream sequence or a major funeral — this exuberant, elaborate, and elongated musical-esque outing was a bold way to incorporate their return.

Why? Well, in part because the scenes seemed set up to distract from the notion that anyone other than Logan would come all the way to Stars Hollow simply to entertain a lost Rory. No matter how doubtful (from very to never-gonna-happen), that’s not the point. Bringing everyone back, no matter how unlikely it seems, is a kind gesture from the Palladinos; fan service, sure, but fan service that ultimately brought far more joy than not including them would have. Let the logistical reasons be damned. Embracing the absurdity was the way to go.

But Logan and his potential future fatherhood isn’t the only man in play for Rory by season’s end. Dean gave Rory one helluva longing look before exiting, and who can blame him after she heaped enough praise on her first flame to reignite the fire right there in the store. And Jess! Let’s not forget about Milo Ventimiglia’s Jess, who also seemed to reconsider Rory in his last on-screen appearance.

While we don’t want to define Rory by her men, it’s a little bit hard not to bring them up first after spending so much time watching the Yale grad struggle out in the real world. It’s safer to talk about the men because there are easy answers there. (My advice: dump everyone. Start over with fresh blood.) But her love life and professional life were equally unsteady all these years later, leading to more of the same questions surrounding the career-focused school girl with impeccable morals we got to know in Season 1, who later blossomed into a more well-rounded character, if a questionable decision-maker by Season 7.

Here, she’s still trying to figure things out. As realistic as it is to see a journalist barely scrape by in today’s day and age of shrinking freelance budgets and vanishing newspapers, much of her story was driven by bouncing between Logan in London — come on, Rory! He’s engaged! — and begrudgingly accepting writing assignments about long lines in New York. Real-world writers are jumping at anything they can get, even if they have snuck one piece into The New Yorker, so I expect to see some stories about Rory’s whining pop up on the very sites she’d probably refuse to write for. Still, her professional life didn’t bother me too much (IndieWire is definitely prestigious enough for Rory), and I’m sure her book will be a big hit, providing Rory the future her writing talent deserves. But these storylines combined with her final words — “I’m pregnant” — cast Rory behind the shadow of her romantic choices…again. 1. Melissa McCarthy
– OK, so this was a given. We knew Sookie would be returning, and when she didn’t show up within the first 90 minutes, it made sense she’d be saved for the finale. Her entrance made the wait more than worth it — effortlessly paying homage to her debut in the pilot — as did McCarthy’s overall revival of the loving and lovable chef. Sookie’s the best, and she didn’t disappoint.

2. Peter Krause
– Peter Krause! Who better to not back down when faced with Lorelei’s charms than her older brother from “Parenthood”? Krause made the dialogue work beautifully, and the two haven’t lost their chemistry in the off years following NBC’s family drama.

3. Mae Whitman
– The honorary third Gilmore girl (not sure if this has been bestowed yet, but I dare do it myself, if not) did her part to help the original mother-daughter team as a New York line addict who conveniently worked for a shoe store with — you guessed it — a long line. Rory and Lorelei got to avoid it, though, thanks to the former “Parenthood” star’s reciprocal good nature.

5. Jason Ritter
– Lauren Graham’s former flame from “Parenthood” teamed up with her brother — which is a lot less weirder than I’ve made it sound — as the first PCT patrolman to check Lorelei’s permit. He didn’t leave the mark Krause did, but who can?

6. Sutton Foster
– I get that some people will defend “Bunheads,” Amy Sherman-Palladino’s longest-running but still short-lived follow-up to “Gilmore Girls,” and Foster’s appearance is innocent enough not to prove distracting or feel extraneous. A kind inclusion, if unimportant overall.

7. Christian Borle
– An obsessed “Gilmore” fan and Foster’s ex, Borle did a fine job chipping in for “Stars Hollow: The Musical,” and his talent topped any sudden excitement caused by the mere sight of him. And you need the latter to compete with all the nostalgic favorites populating the actual Stars Hollow.

Perhaps what’s most important to realize about the new material is that it’s clearly made with love. There’s very little eye-winking involved, and for a series as sincere as “Gilmore Girls” has always been, that’s the perfect attitude to take. In era of revivals driven and manipulated by the almighty dollar, “A Year in the Life” is refreshing in its genuine creation.

“Gilmore Girls: A Year in the Life” premieres Friday, November 25 exclusively on Netflix.

This Article is related to: Television and tagged Gilmore Girls, Gilmore Girls: A Year in the Life, Netflix, TV Reviews