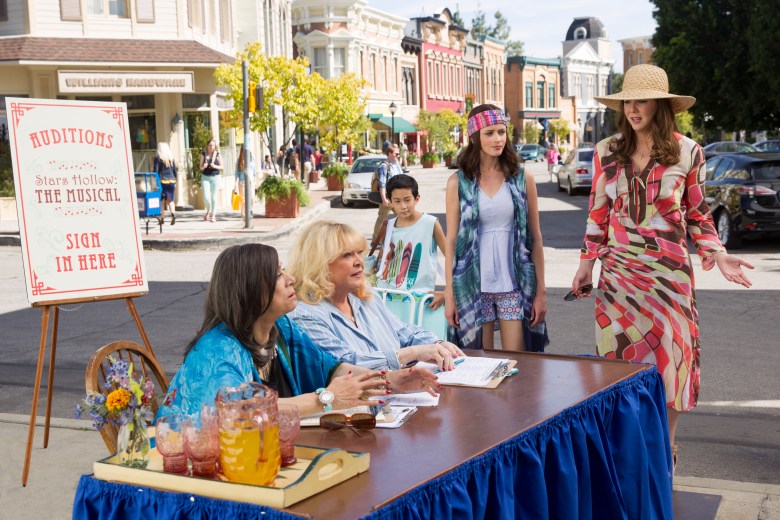 Move over, “Pretty Little Liars.” The “Gilmore Girls” are back in town, literally.

For Netflix’s revival, the “Gilmore Girls: A Year in the Life” production team had the daunting task of recreating all of the original Stars Hollow sets that were so essential to the series’ quirky but charming small-town feel and storylines. Part of the problem was that most of the structures originally used on Warner Bros.’s Burbank, Calif. backlot were repurposed for the sets on Freeform’s “Pretty Little Liars.”

“Goddammit, they changed our Stars Hollow,” creator Amy Sherman-Palladino said to reporters during the Television Critics Association press tour in July. “They got a deal on brown paint. I’ve never seen so much brown paint in my entire life. I’m like, ‘Who the fuck doesn’t want some color in your town?’ There wasn’t any red. There wasn’t any yellow. There wasn’t a posy. There were still the sidewalks that we put in, but they’re cracked. So we had to go back in and zhoosh up Stars Hollow. We had to rebuild all the sets.” Whether it was Kim’s Antiques, Le Chat Club (an emporium for all things feline), Luke’s iconic diner or the central gazebo, every part of the weird little Connecticut town exuded comfort and safety. You might want to tear your hair out at the townspeople’s antics, but nothing truly horrible would happen in Stars Hollow.

Unless you count the fact that all of the town’s decorations and set pieces were thrown out after the end of the show. “It costs money to save these things,” Sherman-Palladino observed. And while that meant some items couldn’t be matched exactly, the crew still captured the essence of the town as best they could.

Take for example, Luke’s Diner, a purveyor of delicious and nourishing foods and center of the town. Proprietor Luke Danes (Scott Patterson), the number one consumer of flannel shirts in Stars Hollow, kept Lorelai and Rory Gilmore (Lauren Graham, Alexis Bledel) fed and caffeinated throughout the years. Milo Ventimiglia as Jess Mariano and Scott Patterson as Luke.

Sherman Palladino recalled, “I just remember the day that Scott walked into Luke’s Diner for the first time, because it wasn’t Luke’s Diner.” Instead, the structure was being used as “Pretty Little Liars” hangout the Apple Rose Grille. “I just remember Scott’s face when he walked back in there. It’s like, ‘Holy dear God,’ because it was very emotional to not have those sets there as we were writing or talking about it. We had to get the liars out and put the diner back in.”

“The diner seemed bigger too, but it wasn’t,” added Patterson. “It was more colorful, and the floors were very soft. It was a really padded, nice floor. Very pleasant.”

READ MORE: Scott Patterson on How the Stakes Are Raised in the ‘Gilmore Girls’ Revival

The actor had had a difficult time getting back into the head of his character initially, but cited how well Stars Hollow was put back together as the reason why he was able to recapture Luke.

“That’s a really important part of it, for actors and for audiences to really buy in, is how well crafted the buildings are and how real it is,” he said. “They take months to do that. And that’s what so many amateurish or less budgeted productions suffer from. They’re not suspending disbelief, because the construction crew wasn’t as good or the designers weren’t as detailed. And here, it’s just the best of the best.”

The dimensions of the buildings and rooms weren’t quite the same either. (Did Kirk throw out the town’s blueprints?)  “We’d walk into a hallway, and it was familiar, but it was not exactly the same,” Lauren Graham, who plays Lorelai Gilmore, said. Executive producer Dan Palladino added, “Yeah, it was a little like ‘Galaxy Quest,’ where they’ve created everything just based on a TV show.” In the 1999 comedy, a group of aliens created a spaceship based on the one seen in the fictional sci-fi series. “That’s what our production designer had to do, just sort of guess how big things were. And some were bigger. Some were smaller.”

In the case of the Gilmore mansion in Hartford, the interior was built larger than it had been previously. During EW’s Popfest in October, Sherman-Palladino revealed that the late Edward Herrmann, who was 6-feet-5 and played Lorelai’s dad Richard Gilmore, often looked cramped in the original house because the budget was limited the first season. The set was expanded bit by bit as the seasons went on, but the revamped house for the revival was “substantially” bigger.

READ MORE: Check Out 28 ‘Gilmore Girls: A Year in the Life’ Photos

“It’s weird because they found some of the same furniture, but it looked really tiny,” said Sherman-Palladino. “We were trying to figure out why the furniture looked so tiny, and we just thought, ‘Well, Kelly [Bishop] shrunk.’ And then, because things were sort of timed out like, you knew how long it would take to do a line from here and get into the dining room, then we realized, ‘Oh, no, you need, like, twice as much time to get into the dining room.’” For Graham, being back in Stars Hollow at first sparked a feeling of panic in her. “Some of it for me is like a little bit of whatever the glamorous actor equivalent of PTSD is because we spent lots of middle-of-the-night hours [there],” she explained. “So a little bit of it is like, ‘OK, it’s not the same, it’s not the same. OK, we’re doing this differently.’ It doesn’t take as long to film anymore because of HD and new union rules. You can’t film beyond 14 hours anymore. That was new, so it was very sense memory. Good and bad.”