Donald Trump then demands the cast apologize to the vice president-elect after he was "harassed." 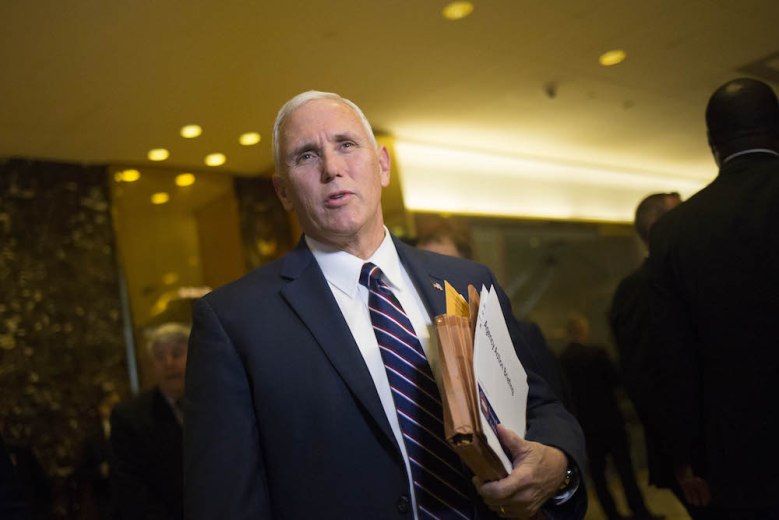 Friday night’s “Hamilton” show had a surprising guest in the audience. Vice President-elect Mike Pence attended the Broadway production and upon entry was booed by the crowd. During the curtain call, the cast used his attendance as an opportunity to send a message to him, which was recorded and shared online via the show’s Twitter page.

“Vice president-elect, I see you walking out but I hope you will hear us,” said Brandon Victor, who portrays Aaron Burr. “There’s nothing to boo here, we’re all sharing a story of love.”

“We welcome you, and we truly thank you for joining us here at ‘Hamilton: An American Musical,’ we really do,” he stated. “We are the diverse America who are alarmed and anxious that your new administration will not protect us, our planet, our children, our parents, or defend us and uphold our inalienable rights, sir. But we truly hope this show has inspired you to uphold our American values, and work on behalf of all of us.”

He concluded the speech by thanking him for “sharing this wonderful American story told by a diverse group of men and women of different colors, creeds and orientations.” Watch the full statement below:

Tonight, VP-Elect Mike Pence attended #HamiltonBway. After the show, @BrandonVDixon delivered the following statement on behalf of the show. pic.twitter.com/Jsg9Q1pMZs

Producer Jeffrey Seller told The Hollywood Reporter that they had received Pence’s request to attend the show earlier that day. The future VP is known for his anti-gay legislation and for supporting “conversion therapy,” but instead of rejecting his request, they decided to have him attend. It was then when Lin-Manuel Miranda, director Tommy Kail and the cast at large decided to write the statement that was read at curtain call.

“The cast, the creators, we all felt that we must express our feelings to vice president-elect Pence. This is not a normal time, this is not a normal election. This has not been a normal result. And in a democracy, one must let his and her voice be heard, and we were not going to the show tonight without expressing how we feel,” Seller told the publication. “Everybody should be able to see this show, regardless of their politics, but it does just so happen that the politics of this administration have been so negative toward minorities, people of color, gay people that we felt the need to speak up. As a cast comprised of minorities, women, gay people, it was necessary. We had to speak. We had to express how we feel.”

Earlier the next morning, Donald Trump fired out some tweets demanding that the cast apologize to Pence after he was “harassed” and were “very rude” to a “very good man.”

Our wonderful future V.P. Mike Pence was harassed last night at the theater by the cast of Hamilton, cameras blazing.This should not happen!

The Theater must always be a safe and special place.The cast of Hamilton was very rude last night to a very good man, Mike Pence. Apologize!

As for Miranda, creator of the hit Broadway show, he tweeted how proud he was of his cast for leading with love.

Proud of @HamiltonMusical. Proud of @BrandonVDixon, for leading with love.
And proud to remind you that ALL are welcome at the theater.

This Article is related to: Film and tagged Hamilton, Mike Pence