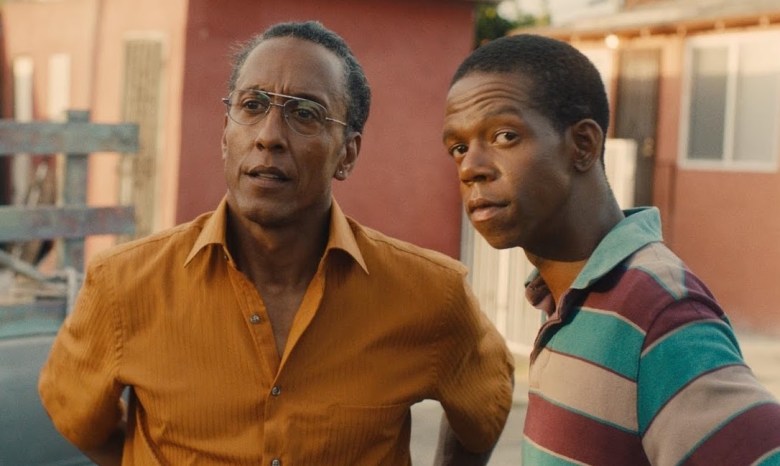 Josh Locy’s “Hunter Gatherer” is an innocent and eccentric debut, an off-kilter comedy that dipsy-doodles through a minefield of problematic ideas with the oblivious grace of Charlie Chaplin rollerskating from one potential disaster to another. A young white filmmaker from Virginia telling a heartwarming magical-realist story about a poor, earnestly simple black man in south Los Angeles… what could go wrong? The answer, of course, is “thank god that’s a rhetorical question.” But viewers who felt that fare like “Beasts of the Southern Wild” was exploitative or condescending are unlikely to be rankled in the same way by “Hunter Gatherer,” a warm-hearted movie which follows a diehard romantic but refuses to romanticize his plight.

As the film begins, a manic middle-aged man named Ashley Douglas (Andre Royo, famous for playing everyone’s favorite heroin-addicted informer on “The Wire”) is running around his mom’s house in a bathrobe and a pair of tighty whities — he’s just finished serving a three-year prison sentence, and he wants to throw a party for all of his old friends. The only problem is that he doesn’t seem to have any.

We never learn much about who Ashley was before he was sent to the clink — or why he was there in the first place — but it’s clear that he’s always been a high-energy eccentric, and that the people in his life haven’t been too distraught by his absence. That’s especially true of his ex-girlfriend, Linda (Ashley Wilkerson), whose undiminished beauty highlights how Ashley is fraying at the seams. “Your boo boo’s back!” he excitedly shouts at her window, but Linda has already moved on. She’s dating the nice neighborhood garbageman, a typically solid guy who fits right in to a movie where all of the characters default towards empathy and no one is hurtful unless Ashley gives them a good reason to be.

Still, it takes a rare kind of patience to put up with our hero for long — it takes someone who’s as lonely as he seems to be. Enter Jeremy (a quietly affecting George Sample III), a simple-minded twentysomething who’s a bit too guileless to see Ashley for the deluded dreamer that he is. The two form a quick and desperate friendship, Jeremy agreeing to help the older man with his cockamamie start-up idea. When they’re not disposing of people’s refrigerators for a negligible profit, Ashley pays a tutor to teach him cursive (so he can write a love letter to Linda) and Jeremy participates in a strange medical experiment (so he can afford to fix the respirator that’s keeping his grandfather alive). The world spins madly on.

Royo and Sample completely inhabit their childlike characters, tethering even their cutesiest tendencies to a real sense of longing. They’re both noble fools, both tilting at windmills in a place where power is often harnessed by other means. Locy trusts in the purity of their friendship, and doesn’t contrive some flimsy plot device to bring them together. He uses Keegan Dewitt’s lively, erratic score to add a sense of fun to their half-baked adventures, and also to lend the illusion of shape to a plot that doesn’t really have one (and falters whenever it pretends to).

READ MORE: Michael Shannon Calls Out Trump And His Voters

Sometimes, the film’s scattershot structure reflects the heart of its wayward hero, who recites the alphabet from the middle on out (“It doesn’t matter the order because I know the letters!”). At others, especially towards the end, Locy just seems lost. But if Ashley and Jeremy individually begin to wear out their welcomes, they remain the film’s heart and soul (respectively), and the bond between them grows stronger until the understated final shot.

Executive produced by David Gordon Green and diffusing its vision of poverty through the same veil of enchantment that was draped over his debut (2000’s “George Washington”), “Hunter Gatherer” is a tender portrait of the black America that you seldom see in the movies, if only because people seldom agree to finance the movies that want to show it to us. Reclaiming a neighborhood that is typically depicted as the kind of lawless, post-apocalyptic Thunderdome that Donald Trump described in his campaign rallies, the film is completely devoid of violence and drugs — it might not even have any cursing.

People might shudder at the thought of something that combines the grounded presentness of Charles Burnett with the emotionally searching quirk of Miranda July (and who could blame them?), but the sheer goofiness of Locy’s dramedy and the emotional integrity of his characters help to avoid any sense of performative wokeness. Even if Locy doesn’t have a particularly great story to tell about this community, “Hunter Gatherer” warmly affirms the obvious fact that there are an infinite number of great stories to be told there. These days, some people could use the reminder.

This Article is related to: Film and tagged Hunter Gatherer, Reviews