With "Jackie," starring Natalie Portman, it was important to get inside the First Lady's head and overcome the trauma of JFK's assassination. 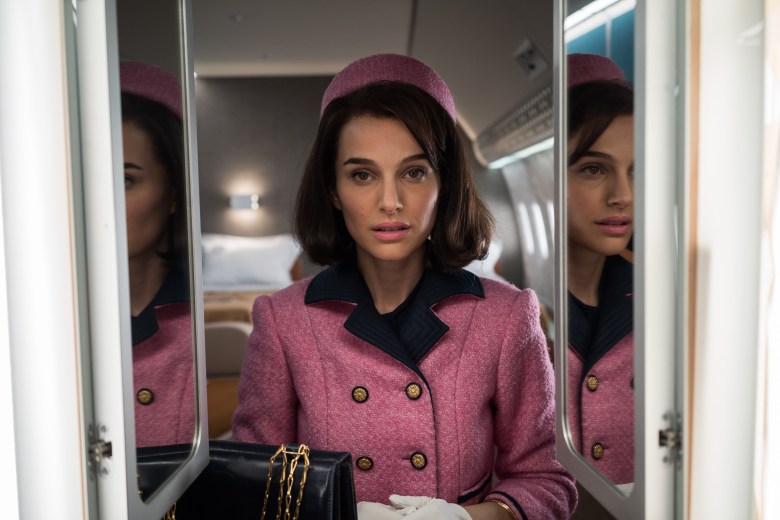 There’s a lurid fascination in “Jackie” about the eponymous First Lady’s PTSD following JFK’s assassination. Chilean director Pablo Larraín (Oscar submissions “No” and “Neruda”) approached the movie as an outsider looking in, trying to get close to Mrs. Kennedy (Oscar contender Natalie Portman) as she tried to overcome her grief.

“It’s a horror film in a way because it tells the story of a woman, with a terrible trauma,” Larraín’s frequent editor Sebastian Sepulveda told IndieWire. “So Pablo made the right choice putting the camera very near to her. And the score too [by Mica Levi] helped a lot in establishing this melancholy mood.”

Cinematographer Stephane Fontaine (“Elle”) chose to use Super 16mm and a lot of held-held shots for both aesthetic and practical reasons. “You’ve got archival footage and two different kinds of period footage,” he said. “The 1962 White House Tour that she did for CBS, which was shot on video and we shot on video as well, and our footage needed to be damaged to match the footage we were able to use for the funeral procession.” “And just being able to look at her — she’s really fascinating, Natalie, as Jackie. And we shot very long takes,” Fontaine said, “sometimes up to a full magazine [of 10 minutes]. Which meant that watching dailies, you’d spend hours looking at her face, moving in the White House.”

The saturated, Kodachrome look dominates most of the film compared to the more subdued and softer sequences with the magazine interviewer played by Billy Crudup. “The interviews are quite different in that we [only had three days] to shoot them on the East Coast,”  Fontaine added. “And since there were a lot of pages, for the first time we used two cameras [on each actor], which meant that physically they couldn’t see each other at all.”

By contrast, the cinematographer said “the White House needed to feel like a shelter compared to all the chaos outside with the assassination.”

Editorially, it was a non-linear challenge for Sepulveda, as the movie jumps back and forth in chronology between the White House Tour, the interview, the assassination, a meeting between Jackie and her priest (John Hurt) and preparations for the funeral procession. “Pablo and I talked about it being an emotional movie — and I was able to navigate through that,” he said.

Composer Levi (“Under the Skin”) created a haunting synthesis of classical and jazz. “I generated some music that she might’ve been interested in at that time, and that dictated what kind of instruments to use,” she told IndieWire. “So I have elements that are half-orchestral and half-jazz with strings and the vibraphone.” One of the first pieces Levi composed was a light waltz when Jackie’s on the plane to Dallas with JFK. This consists of clarinet and flute.

“Then the waltz comes apart when she’s in the hospital,” Levi said. “It’s very dislocating and the instruments are broken down into [separate pieces].”

Levi composed several themes for the score and the director, editor and sound designer David Miranda then decided where to place them — or not — since most of the movie contains no music.

Miranda said there was a minimalist approach to sound design and was therefore selective in his choices. “In dealing with the bigger events like the assassination and the funeral, we [emphasized] the sound of cars driving and flags flying,” Miranda said. “But one of the decisions early on was to replace Jackie Kennedy’s voice with Natalie Portman’s voice [who not only captures the accent but the intonation] during the White House Tour. And, as far as the interviews, it was more of a naturalistic sound [containing a less girlish intonation by Portman].”

As with everything else, it was about getting inside Jackie’s head in her journey from trauma to legacy.

This Article is related to: Awards and tagged Below The Line, Jackie, Natalie Portman, Pablo Larraín