Wordless Music, the team behind live orchestrations of "Punch Drunk Love" and "Beasts of the Southern Wild," premieres their biggest production: a 110 piece orchestration of "Tree of Life." 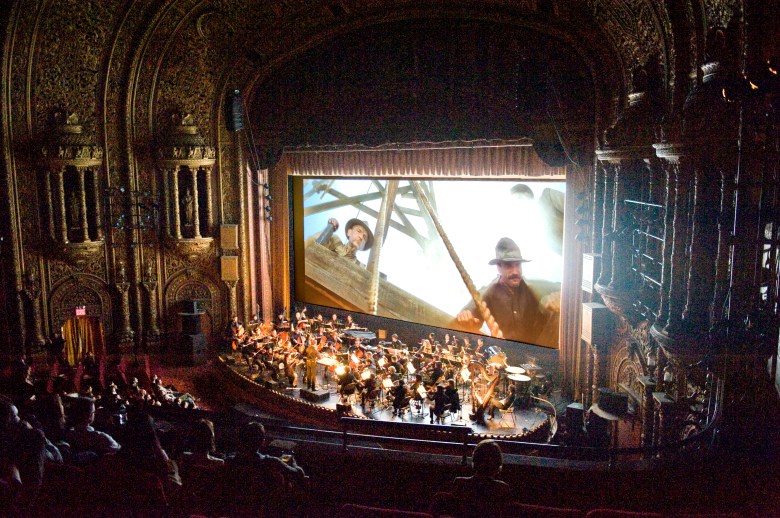 “There WIll Be Blood” accompanied by a live orchestra

Later tonight, close to 2,000 moviegoers will fill Howard Gilman Opera House in Brooklyn to watch Terrence Malick’s “Tree of Life,” set to a live score played by a 110-piece orchestra and choir. It’s the seventh live score production by the New York-based Wordless Music Orchestra, which has previously staged live music productions of other modern day classics like “There Will Be Blood” and “Under the Skin.”

For the founder of Wordless Music, Ronen Givony, the need to create a heightened sense of occasion with a live event is vital in the age of Netflix and Spotify.

READ MORE: Howard Shore, Composer for Cronenberg, ‘Spotlight’ and Scorsese, on the Creation of Diverse Scores

“I think it’s fair to say that whether it’s an orchestra concert or a rock concert or a movie, it seems like especially in New York, the simple act of going out and seeing a movie in a theater with complete strangers sometimes seems like an increasingly endangered activity,” said Givony in a recent interview with IndieWire. “We are trying to emphasize the sense of the occasion and the rarity of seeing a film made by a great artist.” “There Will Be Blood” with Live Score

For Joseph Melillo, the Executive Producer at the Brooklyn Academy of Music, who is responsible for all artistic programming at BAM, watching a film with a live music enhances the audience’s appreciation of the movie itself.

“Harnessed together, film and live music become a theatrical event,” wrote Melillo. “You cannot escape that you are experiencing musicians performing the musical score while you are engaged in the storytelling of the film.”

Started in 2006, Wordless Music was created in an effort to get younger audiences to appreciate classical music through contemporary musicians.

“We were seeking out audiences that do not normally attend orchestra and classical music concerts,” said Givony. “We wanted to show them that although they may not be listening to John Cage and Steve Reich, they are listening to Radiohead, Bjork, and David Byrne, who are closer to classical music than they might know.”

Putting someone like Radiohead’s Jonny Greenwood on stage alongside the music of composer Gavin Bryars, Wordless has been staging unique musical performance at special venues — ranging from the Guggenheim Museum to the Good Shepherd Faith Church — around the world for 10 years.

“A curious, intellectually hungry individual really just needs to be intelligently welcomed,” said Givony. “It doesn’t need to be explained to how great the music they’re listening to is, it’s a matter of just putting it in front of them and letting them judge it on the merits.”

In 2013, Givony decided to extend his experiment by collaborating with director Benh Zeitlin and his co-composer Dan Romer to put together an outdoor screening of “Beasts of the Southern Wild.”

As you can see in the video clip above, the event was an enormous success, leaving Givony, a self-proclaimed “film dork,” knowing he wanted to do more live score screenings. He also knew from working with Romer and Zeitlin, a close collaboration with filmmaking team was essential.

Part of this is pure logistics. To pull this off, Wordless needs a print of the movie that has the music removed from the soundtrack, something a distributor is more likely to supply if supported by Paul Thomas Anderson or Terrence Malick. There are also gaps that sometimes need to filled in.

“‘Punch Drunk Love’ for example, that film was made right on the transitional point to when everything was digitized and a lot of the sheet music that Sony provided us with did not align at all with what ended up on the soundtrack, because in the studio they would mess with it,” explained Givony.

In translating the score to a live performance, including the mix and instrumentation, Givony doesn’t always feel comfortable making decisions without the original artists’ participation. “The only thing [all the films we do] really have in common is that they’re made by total artists,” said Givony. “It’s not a coincidence that Zeitlin wrote half that score and was playing banjo on stage. It’s not a coincidence that Paul [Thomas Anderson] was standing at the sound stage saying ‘bring up the effects,’ ‘bring up the dialogue,’ and stood at the sound board for every performance.”

This idea of a filmmaker being so rigorous and precise about the use of music is also certainly true of Terrence Malick.

“Terence Malick, in addition to being the director, is also the defacto music supervisor, sound editor, and he deals with every audio decision that goes into his movies,” said Givony.

Yet unlike Anderson or Zeitlin, Givony didn’t have a way of connecting with the director known for staying far out of the public eye. After getting permission from Fox to do “Tree of Life,” Givony was eventually able to get in contact with Malick, a classical music aficionado, who had a long list of questions wanting to know about everything about rehearsals, the venue, print quality, and screen size. “Another big question was about who our singers would be, as this is a very vocal heavy score,” explained Givony. “We have a soprano who was just at the Park Avenue Armory. There is also a pretty prominent boy-soprano part in the score, so we had to find this American boy choir school in Princeton [where we discovered] this amazing six-year-old singer, and of course his name is Charles Love, because what else would it be for a Terrence Malick movie.”

READ MORE: Why Terrence Malick Still Believes You Should See Movies On the Big Screen

Reaching Malick and getting his blessing, was just a small part of why tonight’s “Tree of Life” performance took three years to put together and was such a massive production compared to previous Wordless events. The film’s soundtrack includes twenty-plus composers. The film also has an original score, which is a small percentage of the music in the film, written by the composer Alexandre Desplat, who requested it not be played live. Wordless then had to work with Fox to identify the sixty-plus music cues that needed to be removed and the Deplat ones that would remain.

Givony also hired a young composer to go through all the music in the film, figuring out what pieces of music from contemporary composers they would need obtain permission, while also generating sheet music for what is essentially a mixtape of the greatest composers of all time.

“This is all just to say that it was a little more involved than just playing Jonny Greenwood’s cues,” joked Givony. The classical music all required a orchestra two to four times bigger than previous Wordless productions, which made funding the event stressful, especially because Givony was worried “Tree of Life” might not be as big a draw as their previous films.

“Obviously, when you’re doing a popular film like ‘There Will Be Blood’ with someone like Jonny Greenwood on stage, you can count on a certain number of tickets being sold,” said Givony.

BAM will be a packed house tonight and Saturday, which for the Wordless team feels like vindication of their larger mission and three-year journey to put it all together.