The singer says that "the visuals are meant to create contemplation." 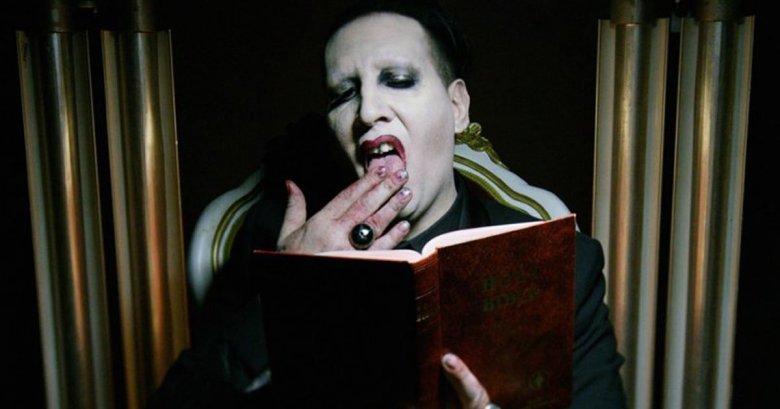 Marilyn Manson told The Daily Beast that it’s his duty as an artist to ask the questions and have the viewers answer them. So what is he trying to say in his new music video for “Say10?”

The singer shared a gory NSFW clip on Election Day which shows him sitting on a throne, ripping pages from a bible, then panning over to a beheaded man who resembles the Republican presidential nominee Donald Trump. The video is directed by Tyler Shields, and while it doesn’t mention that it’s Trump, Manson told the publication that the piece is open to interpretation.

“Either way tomorrow goes, the visuals are meant to create contemplation. Because it’s obviously bigger than just tomorrow,” he told The Daily Beast on the eve of Election Day. “It’s about the desperate acts of people who believe something that is preached by an unbeliever.”

“Right now we’re in such a state of confusion when it comes to religion, politics, sexuality, and how they all tie together, and it’s being turned into a circus and a sideshow—and that’s something that I’ve been described as a ringleader of,” he continued. “It seems like a time for me as an artist, and as an American artist, to make something that causes a new set of questions to arise that aren’t simply statements.”

Manson previously told Rolling Stone that he wouldn’t be voting in the election due to the fact that he “didn’t find either candidate to his liking.” Adding, “I don’t think that’s a coward’s stance. A lot of people might say that. I just don’t really want to be a part of this piece of history. Last time, I did want to be involved in some piece of history as a voter.”

“Say10” is the title track off of Manson’s upcoming album, due out early next year. Check out the  clip below.

This Article is related to: Film and tagged Donald Trump, Marilyn Manson, Music