Despite a stint on "Two and a Half Men," Lynskey rarely chases paycheck roles. 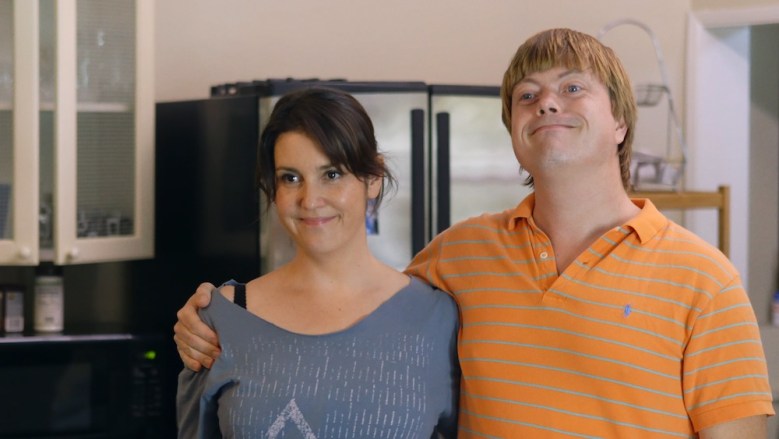 Surveying Melanie Lynskey’s diverse body of work, from her impressive debut in Peter Jackson’s “Heavenly Creatures” 20 years ago to the Duplass Brothers’ “Togetherness,” one thing is clear: Lynskey takes her project choices as seriously as she does her performances.

Over the last few years, Lynskey has appeared in a robust offering of indie films: Joe Swanberg’s “Happy Christmas,” Todd Louiso’s “Hello I Must Be Going,” and her friend Clea Duvall’s directorial debut, “The Intervention,” for which she received a special jury award from the Sundance Film Festival. She continues her winning streak with Linus Phillips’ “Rainbow Time,” an offbeat comedy that explores sensitive territory without devolving into cliche.

The film stars Phillips as Shonzi, a developmentally delayed jokester with a fondness for women, filmmaking, and his brother Todd (Timm Sharp). Lynskey plays Lyndsay, Todd’s idealistic girlfriend, who coddles Shonzi during trying moments when Todd would rather punch him. The brothers share a fraught sexual camaraderie in which Lindsay becomes an unwitting point of contention.

READ MORE: Melanie Lynskey Is Always Willing to Wait for the Right Part (And It’s Paying Off) — Girl Talk

The conflict is just weird enough to drive the film, but never uncomfortable. “Rainbow Time” walks its chosen tightrope gracefully, hinting at possible weirder undertones before veering safely back on track. “It somehow avoided a lot of things,” Lynskey said in an interview at the new Alamo Drafthouse in Brooklyn, where the film opens today. “When I was reading it, I was nervous that it was going to fall into any number of traps that it didn’t. Like the whole thing with male sexuality, but it didn’t fall into that trap. Then Linas’ character was so interesting and complicated and funny and awful, he got to be all sorts of things.” Lynskey signed on to the role based not only on the strength of the script, but also a budding friendship with Phillips — one that developed over snail mail. Phillips was a fan of Lynskey’s work before he was invited to a party at her house by a mutual friend, he told IndieWire by email. “I actually lived down the street from her at the time and joked that I was her new stalker.” He even sent her a photo of himself outside her home. “I cut out letters from magazines to write it,” he said, and the actress actually wasn’t spooked. “And that’s how I found out what a great sense of humor she had,” he added. Lynsky confirmed their strange history. “He was outside my house for about 10 minutes before he came into the party, taking pictures,” she said. “It sounds terrifying, but it was so funny.”

Once he finished the script for “Rainbow Time,” he sent it to Lynskey, including “another creepy note with the cut-out letters, ‘Will you be in my movie?'”

READ MORE: Review: ‘Rainbow Time’ Is Like a Duplass Brothers Remake of ‘Freddy Got Fingered’

Lynskey was no stranger to working with friends, having recently collaborated with Duvall, whom she cheerily described as her “life partner.” “In a way, it’s scarier to work with those people because there is so much at stake,” said the actress. “If I’m having a hard time being directed by someone, I will stand up for myself. I really stand up for my instinct and what I feel is right. I can get argumentative, and it’s hard when it’s someone I love because I don’t want to fight with them. I have to figure out how to hold on to my own instinct without disappointing this person.”

That strong instinct emboldened her to turn down a lucrative series regular role on CBS’ “Two and a Half Men,” asking Chuck Lorre to make her a recurring guest star instead. Cast as “the wacky neighbor,” Lynskey said she did the pilot “just to try out” television, with no inkling of the massive success that the sitcom would eventually find. “When they asked me to be on the show, honestly I didn’t have a lot going on,” she said, recalling that she had recently finished shooting the movie “Shattered Glass” and wasn’t sure of her next move. “I was feeling a bit low.” She wanted to buy a house, she liked the people on the show, and the money seemed good enough.

After she signed on, when “Shattered Glass” finally came out in 2003, the film was a critical success — earning a comparison to “All The President’s Men” from Roger Ebert and a Golden Globe nomination for Peter Sarsgaard.

READ MORE: ‘Togetherness’ Stars Melanie Lynskey and Amanda Peet Are the Sisters You Wish You Had In Real Life

“I realized, this is the only way I want to feel when I’m a part of something,” she said. “I want to feel very proud of it, and believe in it one hundred percent.” She still thinks highly of Lorre, who worked with her to change her contract so she could make occasional appearances on “Men” and continued to follow her work. (“He saw everything,” she said.) Even Charlie Sheen, the show’s notoriously troubled headliner, was complimentary of her performance. And there one other bonus to the irregular gig.

“Honestly, doing three or four episodes a year enabled me to pay my mortgage and do independent films,” Lynskey said. “I had this double life: I had this whole indie side of my career, and people in that world didn’t know I was on this huge sitcom. Then, people would recognize me from ‘Two and a Half Men’ and think that I never had another job. But I couldn’t have done one without the other.”

She’s come a long way from her initial explosive performance in “Heavenly Creatures,” which the Alamo Drafthouse will screen November 4 in 35mm with Lynskey in attendance. Her turn as the unhinged teenager led her to a string of early character roles in the U.S., such as in Jamie Babbit’s queer cult film “But I’m a Cheerleader” (“I think people forgot I was in that,” she said) and the wicked stepsister in the Cinderella adaptation “Ever After.”

These days, she finds herself at the center of countless microbudget productions that are notably different from the bigger projects where she got her start. “It’s just easier to make films now,” she said. “People can shoot things digitally and you don’t need a lot of money to make stuff.”

Since “Two and a Half Men,” she has retired “the wacky neighbor” for good. Instead, she has chosen to lend her talents to a wide range of complicated and funny female characters in smaller indie projects. Lynskey is often the lead in those projects, though she still identifies as a character actress. And it’s thanks to the choices she made — both onscreen and off — that writers and directors write more complex female characters, in the hopes that actresses like Lynskey will play them.

She’s certainly not chasing paychecks these days. “I think a lot of people’s representatives don’t want them to do movies where they’re making $100 a day,” she said. “But that’s just what I do. If it’s good, I’ll do it. I think it’s silly to turn things down just because you’re not going to get rich.”

This Article is related to: Film and tagged Interviews, Melanie Lynskey