It's not perfect, but this colorful Disney production feels like a step in the right direction for the studio. 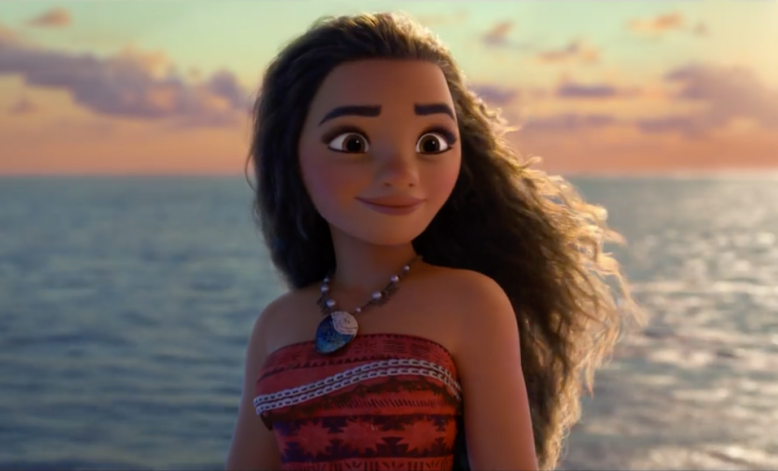 Disney’s animation roster has a history of playing with culturally insensitive fire, from the “siamese” cats in “Lady and the Tramp” to the savage Middle Eastern stereotypes in “Aladdin.” The same directors of that movie, Ron Clements and John Musker, reteam for “Moana,” the tale of a young Polynesian woman who commands the high seas to save the world. But the movie has two other co-directors, Don Hall and Chris Williams, whose credits include more recent Disney efforts such as “Big Hero 6.” While the quartet of credits may contribute to the movie’s uneven tone, it also suggests a merging of Disney’s past and present.

Visually dazzling and loaded with charm, the movie is also blatant in its quest for cultural sensitivity: It has memorable songs by “Hamilton” phenom Lin-Manuel Miranda and a first-rate mystical soundtrack by Samoan composer Opetaia Tavia Foa’i, in addition to a witty screenplay co-written by Kiwi funny man Taika Waititi, all which yields a lively opus that feels at once old school and modern.

Set on the vibrant Montonui island, “Moana” focuses on the title character (newcomer Auli’i Cravalho), who is raised in an isolated, self-sustaining community under the assumption that she’ll never venture out beyond the reef. As a young adult, however, she uncovers her people’s sea-faring past, just in time for her ailing grandmother (Rachel House) to explain that Moana has been chosen by the ocean to control its waves.

These powers put her in a heroic position when the island’s resources abruptly dry up, allegedly due to a menacing lava beast lurking far off-shore. While Moana’s relatives don’t believe the myth, Moana takes the initiative to track down the elusive demigod Maui (Dwayne Johnson), who must recover his magical staff to defeat the monster destroying the ocean. (Hey, a little eco-friendly messaging never hurts.)

The saga of Moana and her smarmy, reluctant helper Maui — essentially the genie to Moana’s Aladdin — doesn’t take any shocking twists, and the particulars of the adventure could be easily applied to any number of other family-friendly animated tales. However, it’s an especially crisp realization of that formula, set in a rich world of bright colors, detailed expressions and buoyant songs, all of which revolve around the mission of fiercely individualistic young woman.

“Every road leads back to the place I knew,” Moana sings in her youth, as she grows frustrated by the limitations of the utopia surrounding her and dreams of exploring the waves. When that dream comes true, however, the realities of the myths she heard as a child face a reality check: When Moana tracks Maui down to another remote island, rather than simply providing his dashing heroics on cue, he tries to shake her off. His main song, “You’re Welcome,” provides a hilarious window into his macho, self-involved character; in a less enlightened casting maneuver, he might’ve been voiced by Jack Black. Dwayne Johnson, however, who has steadily become as adept at sending up his virility as indulging its extremes, does just fine in the role.

While early criticisms of the movie assailed Maui’s physique for suggesting an overweight stereotype, the joke is rather that he’s something of a meathead, who’s covered with living 2-D tattoos that bounce around his pecs on cue. His appearance embodies the fantasy of an invincible hero, which gradually comes unraveled as Moana realizes she can’t solely rely on him to save the day. Unfortunately, Maui becomes the movie’s biggest setback for other reasons. The main source of comic relief, his arrival signals an abrupt shift in tone from the vibrant storybook qualities of the first act to a cheekier, winking self-awareness. (When Maui first spots Moana, he uses a bird’s beak to a sign a rock with his name and asserts, “They call it tweeting.”) Elsewhere, “Moana” stumbles on half-formed ideas, perhaps reflecting the volume of people involved in its direction. An anthropomorphized wave, meant to represent the ocean’s intelligence, interacts with Moana like some kind of under-realized supporting character searching for an identity. With the buff Maui and the entire ocean on her side, the stakes of Moana’s journey lack any real sense of peril. While the climactic showdown offers plenty of alarming fireworks, it arrives with an air of inevitability that’s only slightly improved by the lush images of the finale.

“Moana” may not be the most polished story, but it’s loaded with clever side characters that hold their own, from the hilariously stupid chicken that lingers at Moana’s side throughout to a flamboyant 50-foot crab (Jemaine Clement) who stashes ocean junk on his back and sings a jazzy tune about himself in midst of doing battle. In the pantheon of great animated odysseys in which children venture across strange lands — from “James and the Giant Peach” to this year’s “Kubo and the Two Strings” — “Moana” doesn’t raise the bar, but it’s so eager to hit the right notes it offers enough colorful, enticing possibilities to carry it along.

Of course, this is the Disney version of an old routine, which means that much of the plot plays it safe. No matter its astonishing visual sophistication, nothing on “Moana” reaches the level of “The Red Turtle,” another animated island-based adventure coming out this year. The wordless Studio Ghibli-produced feature from Michael Dudok de Wit, in which a castaway endures the full cycle of life against a spiritual backdrop, delves into deep ideas accessible to all ages with a depth that rarely surfaces in Disney’s wheelhouse. Instead, “Moana” manages to be a cut above studio-produced animated fare while remaining safely within its margins, and in that context it’s a welcome addition.

Notably, “Moana” bears no resemblance to the 1925 silent film directed by pioneering documentarian Robert Flaherty just a few years after “Nanook of the North.” In Flaherty’s “Moana,” the filmmaker staged ancient Polynesian rituals as if they were taking place in the present moment; despite the film’s lyrical beauty, it suffers from a corruptive Western gaze. “Moana” works overtime to keep that damaging force out of the picture, and like its individualistic young heroine, the studio shows signs of growing up.