Peter Berg's second 2016 collaboration with star Mark Wahlberg is at its best when it lets its characters' heroic deeds speak for themselves. 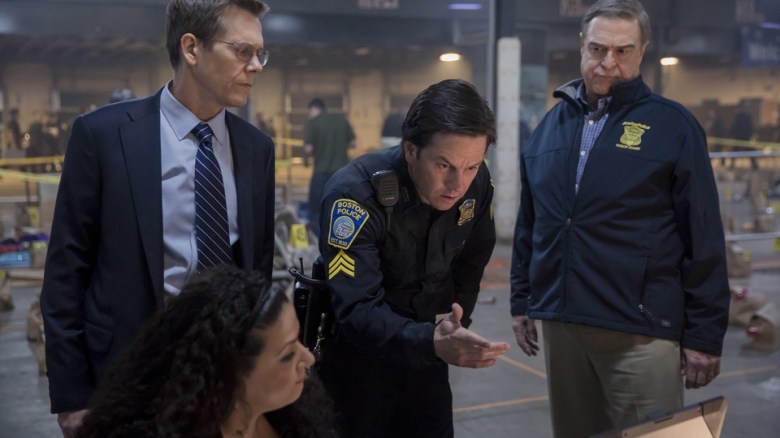 It’s almost impossible to extricate the Boston Marathon bombings of April 15, 2013 from the city itself. From the media coverage after the explosions to the ensuing manhunt that captured international attention, all eyes were fixed on the city, both in its aftermath and its response. To memorialize the efforts of first responders, law enforcement and ordinary citizens, Peter Berg’s “Patriots Day” distills its focus to the principal players. Making this select cross-section of newsmakers may not have captured the entire city, but the film executes those landmark moments on the bombings timeline with haunting tenacity.

“Patriots Day” adheres to that timeline, charting the series of events from the early hours in the morning before the attack. Foregoing an ominous title card, Berg instead opts for a montage of principal characters in the hours before the explosion, many of them shown kissing their loved ones goodbye in their waning moments of peace. They include Boston policeman Tommy Saunders (Mark Wahlberg), Watertown Police Sergeant Jeffrey Pugliese (J.K. Simmons) and even the Tsarnaev brothers who perpetrated the attack.

Berg, along with co-writers Matt Cook and Joshua Zeturner, fashion various sequences both before and after the bombing like a crowdsourced documentary, with surveillance camera, aerial copter shots and home video footage spliced together, each with varying degrees of video quality. The final moments before the explosion are soundtracked by audio from Don Orsillo’s NESN call of that day’s Red Sox game and Al Trautwig’s play-by-play of the Marathon itself for Universal Sports, lending the ensuing chaos an eerie immersiveness that blends recreation with a feeling of genuine terror.

Lingering on the bloody, horrific aftermath of the explosion, Berg details the physical toll of the attack without exploiting any one injury for cheap, stomach-turning thrills. As Tobias A. Schliessler’s camera hovers around each new mounting detail near the marathon’s now-iconic finish line, it’s the growing list of horrors that adds to the uncertainty rather than a frenetic, unfocused view. Given the damage done and the emotional havoc visited upon an entire city, the Tsarnaev brothers of “Patriots Day” are given the most damning characterization of all: that of two young men unprepared and ill-equipped for the grand statement they seek to make. Younger brother Dzokhar (Alex Wolff) is a listless, bumbling college student while alpha male Tamerlan (Themo Melikidze) is too hot-tempered to carry out basic parts of their plan. In this way, the film exercises its own form of revenge against them and Tamerlan’s wife, Katherine Russell (Melissa Benoist), balanced against the chilling calmness inside the brothers’ living room mere hours after they’ve detonated the explosives that killed three people.

Though Wahlberg anchors that early chaos in Saunders’ passionate, instinctive efforts to get medical attention to those in need, there are times when the ambitious attempts to synthesize the entire city’s experience into one person show the film’s seams. Saunders (himself a fictionalized composite of multiple officers and investigators) is often workmanlike in his pursuit of the Tsarnaevs. But the moments in the city’s makeshift crisis response center where Saunders Sherlocks his way into locating the relevant surveillance footage gives him a supercop air that goes against the strong, united everyman narrative the rest of the film tries to maintain.

Berg’s film is most effective when it recognizes that heroism doesn’t come from bombastic shows of force or grand pronouncements, but the assured execution of a given task when the moment demands it most. The film’s falsest moments come from characters seemingly convinced that their words will someday populate the pages of a Hollywood screenplay. Far more engaging are the cacophonous overlaps of investigative efficiency, when dutiful employees have only enough room to add their part to an ever-increasing flow of investigative information. Similarly, Atticus Ross and Trent Reznor’s score does best when its digital pulse complements the natural hum of the tension on screen.

The crowning achievement of “Patriots Day” (and possibly Berg’s directorial career) is the trio of recreations that show how this dark episode transformed Boston and its suburban surroundings into a stage for urban warfare. The second of these three, a mid-street standoff between the Tsarnaevs and Watertown and Boston police units, is as gripping as any on-screen battle in recent memory. Frantically cutting between instigators and enforcers, the film takes no delight or perverse pleasure in this neighborhood-set destruction. This calibrated juggling of perspective, amidst a hail of IEDs, conveys the terror and uncertainty of those under attack.

After the climactic capture of Dzokhar (reminiscent of the closing hostage rescue sequence from Paul Greengrass’ “Captain Phillips”), a brief epilogue engages the real-life surviving principals in a series of talking-head affirmations about the resiliency of the preceding dramatized events. Though these interviews are ultimately a repetition of the themes expressed throughout the two hours prior, it cements the framing of this film as one made for these people, rather than about them. Historians, media scholars and even Boston citizens may debate whether this is the most worthy way to honor those fallen in the attacks. But Berg mounts a heartfelt, harrowing tribute to the film’s real-life heroes.

“Patriots Day” premiered at AFI FEST 2016 and will open in limited release on December 21.