The latest Peter Berg-Mark Wahlberg collaboration takes us inside the bombing's aftermath. 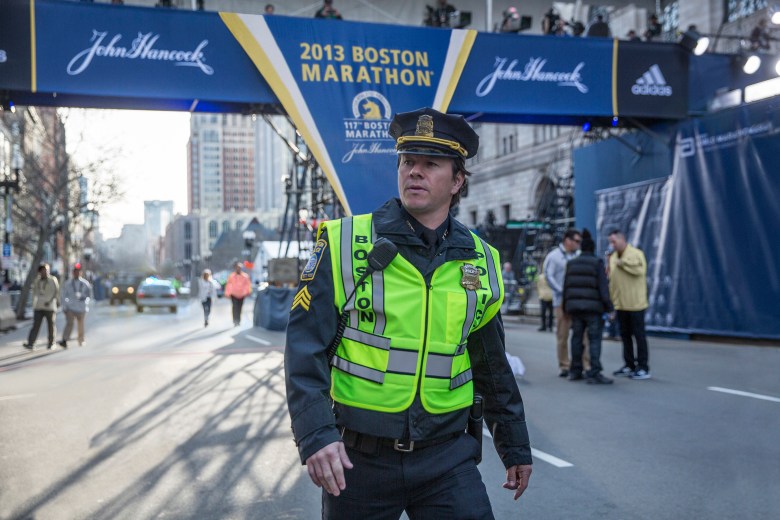 Peter Berg’s “Patriots Day,” his latest collaboration with Mark Wahlberg, examines the 2013 Boston Marathon bombing and its subsequent aftermath through the eyes of a large ensemble. Wahlberg stars as Sergeant Tommy Saunders alongside John Goodman (“Barton Fink”), J.K. Simmons (“Whiplash”), Vincent Curatola (“The Sopranos”), Jimmy O. Yang (“Silicon Valley”) and more. It premiered last night at the AFI Fest and the first reviews are in, and they’re mostly positive.

Variety’s Peter Debruge praises the film, saying it “manages to take a widely reported event and make it feel immediate and at times even unpredictable,” and enjoys that the film “works as a composite celebration of the dozens of people who came together to make ‘Boston strong,’ even if it stars Mark Wahlberg.

The Guardian’s Lanre Bakare describes it as a “moving and compelling homage to a city and its spirit, as well as a gripping procedural,” and that it’s “about the day and its impact on the victims and on the city, but it’s also brazen with its cathartic revenge mission.”

The Hollywood Reporter’s Sheri Linden was a bit more mixed, saying that Wahlberg’s “stand-in for the American working-class hero” is the “least interesting of the men of duty he’s played for Berg.” She also says that, “however heartfelt its admiration for everyone who worked feverishly to contain the damage, nothing in the narrative proves remotely as affecting as the documentary footage and interviews that Berg includes at film’s end.”

IndieWire’s Steve Greene gave the film a B, saying that while “historians, media scholars and even Boston citizens may debate whether this is the most worthy way to honor those fallen in the attacks…Berg mounts a heartfelt, harrowing tribute to the film’s real-life heroes.”

Finally, ScreenDaily’s Tim Grierson was much less positive, claiming that it feels like “a soulless, mechanical exercise in pure kinetic showmanship” and that Berg “too easily undercuts the human element of his story,” preferring to render most of the characters in the film “ciphers representing bland notions of good or evil.”