In looking back at the 1997 cult classic that explored the potential of American fascism, Verhoeven discussed filmmaking in the era of Trump. 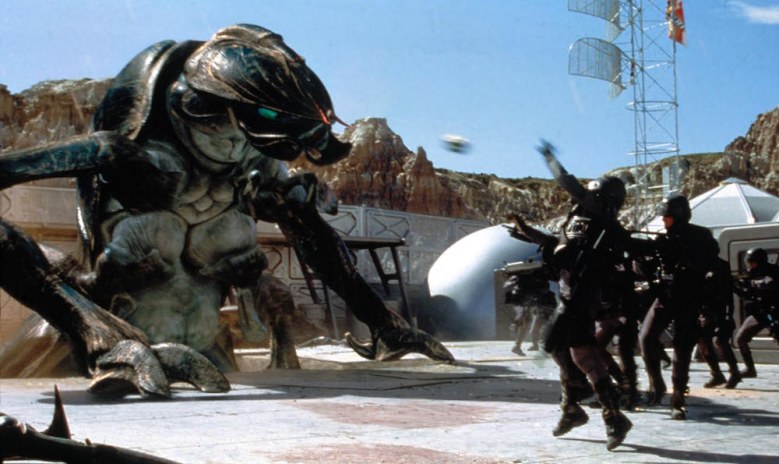 One week after the election of Donald Trump, Paul Verhoeven was at the Film Society of Lincoln Center presenting “Starship Troopers,” a 1997 film that highlighted the fascist possibilities of American society.  It was a connection that wasn’t lost on the provocative 77 year-old filmmaker, who the Film Society is honoring this month with a two-week retrospective.

In discussing the recent news that Sony and producer Neal H. Moritz (“Fast & Furious” franchise) were going to reboot “Starship Troopers,” Verhoeven didn’t pull any punches during a Q&A.

According to the Dutch filmmaker, the reason Hollywood’s remakes (“Total Recall,” “Robocop”) and sequels (“Basic Instinct,” “Robocop,” “Starship Troopers) of his films fail is “the studios always wanted not to have a layer of lightness, a layer of irony, sarcasm, satire.”

Referring to the announcement that the new “Starship Troopers” reboot would go back to science fiction author Robert A. Heinlein’s original novel was particularly troubling to Verhoeven.

“It said in the article [that] the production team of that movie of the remake, that they would go back more and more towards the novel. And of course, we really, really tried to get away from the novel, because we felt that the novel was fascistic and militaristic,” said Verhoeven.  “You feel that going back to the novel would fit very much in a Trump Presidency.” Verhoeven added that Heinlein’s philosophy was fascistic; for the director, as well as screenwriter Ed Neumeier, their film was having an open fight with the novel.  The idea behind “Troopers,” according to Verhoeven, was to create a story that “seduced the audience” on one level, but then make it clear to the audience what they were admiring was actually evil.

“Our philosophy was really different [from Heinlein’s book],we wanted to do a double story, a really wonderful adventure story about these young boys and girls fighting, but we also wanted to show that these people are really, in their heart, without knowing it, are on their way to fascism,” Verhoeven said.

The film was widely rejected in 1997. At the time, critics didn’t see the double narrative and panned the film for advocating the very the neo-Nazi tendencies Verhoeven and Neumeier were actively trying to skewer. Watching the film today, 19 years removed, it is hard to understand how people missed Verhoeven’s obvious satiric perspective, with its heightened artifice, campy performances, propaganda newsreels and clear references to Nazi flags and uniforms.

Verhoeven says the only reason he was able to get away with making the “most expensive art movie ever made,” was that during the two years he was making it Sony was going through tremendous turmoil in their executive ranks — constantly switching studio bosses, having gone from Marc Platt, to Mark Canton, to Bob Cooper to John Calley and Amy Pascal in a very short period.

“We succeeded to do this movie, that is so subversive, and politically incorrect [because] Sony changed [leadership] every three, four months,” said Verhoeven. “Nobody looked at the rushes [dailies] because they had no time because they were fired every three, four months.  So we got away with it because nobody saw it.” Verhoeven added that once a Sony executive saw the film, she said to him, “but these are Nazi flags.”  Verhoeven laughed, “I remember saying, ‘Yeah, but they are a different color, really.'”

When asked about the movie’s prescience, especially in light of responses to Trump’s victory, Verhoeven made it clear that the film was based on what he and Neumeier were observing in American politics at the time. (In particular, they were inspired by the climate in Texas during the 1990’s under then-Governor George W. Bush.)

Moderator Dennis Lim, the Film Society’s head programmer, suggested that now might be the perfect time for Verhoeven to return to American filmmaking. While the director still lives in Los Angeles, his last films were European (“Elle” and “Black Book”), said they he’d been trying to return to American filmmaking, but only if he could do something innovative enough to justify it. But he did have some thoughts on filmmaking in the Trump era.

“We are living in a very interesting, or you can call it scary times, and of course you would like to do something about it, too,” said Verhoeven. “But I think if you go to directly into the now you have no distance… you need to have a certain distance as an artist to the project and not be in the middle of it. So [with] all [that] started to happen lately, I started to read about Hitler and studying 1933 and 1934 in Germany, [which] could be a metaphor that you could use to talk about now.”

The link between Trump’s victory to 1930’s Nazis brought a distinct chill to the room.

“I said something terrible I think,” said Verhoeven, who backtracked. “Of course, nothing is the same.  Nothing will happen in the United States like what happened in Germany in 1933, 1934, clearly not.”

He then referenced “Friendly Fascism,” a controversial book from the 1980’s that discussed how current political trends in the U.S. could lead to the possibility of a totalitarian government, as being more in line with his current political fears.

This Article is related to: Film and tagged Paul Verhoeven, Starship Troopers