We've reached that point in the year when it's time to start cutting shows from your TV budgets — starting with broadcast's latest offerings. 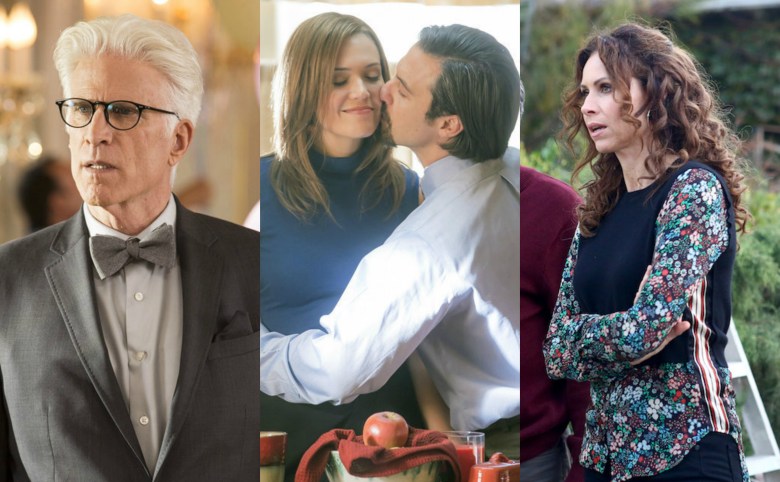 The world of television criticism can be as fun as it is daunting. With so many shows coming out every year, month, week, and sometimes each day, simply watching enough of a new series to adequately grade it is a full-time job; a job we’re very pleased to have, but one we do not take lightly. To that end, it’s time to dig into one of the trickiest TV groups to assess: broadcast’s new entries.

Not only are broadcast seasons typically longer than their peers on cable and streaming, but critics are often given just a pilot episode to view before reaching a verdict. So many of the Fall 2016 entries were graded off merely an hour or two for dramas, and less for many comedies. But now — two months past the first flood of fresh programming — we’ve got a better idea of what shows you need to be watching, those that can be dropped entirely, and the ones falling somewhere in the middle.

READ MORE: ‘Search Party’ Review: A Millennial Mystery Exploring the Highs and Lows of Generation Me

Below, we’ve updated our grades after seeing how the new broadcast series have developed thus far into their debut seasons, noting where they should fall on your priority list as well as how many episodes we’ve seen. Keep each in mind when deciding what to watch — before winter brings a flood of new shows to consider.

The Best of Broadcast Original Review: “Whether you’re still mourning the loss of ‘About a Boy’ or simply looking for a more modern ‘Modern Family,’ “Speechless” is the way to go.”

Original Grade (One Episode): A-

Where It Stands Now (Seven Episodes): “Speechless” has kept up the pace it set from the start, churning out clever comedy with keen insights week after week. Creator Scott Silveri has done an efficient and effective job bringing various characters to the forefront in order to develop them naturally. Most importantly, it remains more entertaining than educational. One of the pitfalls for a show focusing so heavily on a kid with cerebral palsy (and his family) is becoming reliant on the audience’s natural empathy and falling into overly dramatic territory too often. “Speechless” is a comedy first and doesn’t forget it. Everything else is a pretty big bonus.

READ MORE: ‘Red Oaks’ Review: The Best Comedy You’re Not Watching Is Even Better in Season 2 Original Review: “Michael Schur’s post-“Parks and Recreation” return to NBC gets off to a heavenly start before falling to Earth in subsequent episodes.”

Where It Stands Now (Nine Episodes): Turns out the key to getting into “The Good Place” is not holding onto any baggage from a past life. Personally, that means expecting a different kind of comedy than was found on Michael Schur’s last heavenly sitcom, “Parks and Recreation,” but trusting this one would have the same necessary courage. While “The Good Place” was a bit twist-dependent in its opening episodes, a big, big, big decision in the latter half really opens up the story. Gone are past trepidations related to predictable expectations, and in comes a very exciting new way to talk about the intersection of ethics and religion… with more contradictions than you might expect. Plus, Ted Danson is absolutely divine.

Not So Guilty Pleasures Original Review: “We can’t simply watch episode after episode until Baker throws a perfect game. There’s got to be some off-the-field drama, and early hints that a pitcher-catcher love story could develop between Baker and Mike Lawson (Mark-Paul Gosselaar) don’t bode well for implications derived from “Pitch.”

Where It Stands Now (Eight Episodes): Well, they held off on the feared pitcher-catcher relationship drama as long as they could, but the eighth episode of “Pitch” finally broke up that no-hitter. Despite venturing into treacherous territory, Fox’s baseball drama has built a few impressive storylines over its first two months. Independent of his ill-defined love life, veteran catcher Mike Lawson (Mark-Paul Gosselaar) has been forced to face extinction at every turn: age, financial issues, and a looming trade. Pitching phenom Ginny Baker (Kylie Bunbury) has run the gamut of emotional challenges and understandably broke down because of it — this time, off the field (thank God). “Pitch” remains imperfect, but (like Ginny’s serviceable but far from prolific ERA) it’s engaged honestly with just enough issues to merit one more start. Original Review: “Fox’s TV adaptation of ‘The Exorcist’ got off to an intriguing, if largely scare-free, start in a premiere that’s already breaking from tradition.”

Original Grade (One Episode): B-

Where It Stands Now (Four Episodes): To be totally honest, we’ve been a bit too scared to keep up with Fox’s latest horror show, but that only bodes well for fans of the genre. What we’ve been able to watch has slowly elevated the frights from episode to episode, building tension within the fracturing family and establishing the charms and vices of its two presiding priests. A handful of memorable scenes utilize haunting imagery without being overly gross, and the realistic depiction of Chicago helps maximize the series’ unnerving vibes. “The Exorcist” could eventually devolve into demonological conspiracy nonsense, but so far Jeremy Slater’s drama has kept the wrong dangers at bay — and let in just enough of the right ones. Original Review: “Arriving just as Election Day fears are peaking, ‘Designated Survivor’ does away with the whole shebang and installs America’s true choice as Commander in Chief: Kiefer Sutherland. (Hey, we could do worse.)”

Original Grade (One Episode): B+

Where It Stands Now (Six Episodes): Surprisingly, “Designated Survivor” hasn’t leaned too heavily on the TV icon at its core. Instead, it’s spread the love around a cast capable of shouldering the load (including Kal Penn, who’s somehow still underutilized in a role with growing prominence). And while the ABC drama initially set up a dynamic where Sutherland’s president is a hesitant pacifist waging a war against a power-hungry army general during its first four hours, it sacrificed its moral high-ground by literally sacrificing the moral high ground (in a timely narrative about immigration that treated the issue with less-than-timely sensitivity). This one could rebound with a few fresh narratives, but a few too many laughable moments make “Designated Survivor” forgettable in today’s all-too-political world.

READ MORE: Legends of the Fall: 12 TV Actors We’re Happy to See Back on the Small Screen Where It Stands Now (Seven Episodes): We’ve been tracking the many, many twists of “This Is Us” closely, in part because we’re curious just how long they can keep surprising us, but also because we’ve been hoping to fall for this family drama like so many casual fans have already. Sad to say the latter hasn’t hit, as Dan Fogelman’s convoluted plots don’t mesh thanks to its one-dimensional characters. It still feels like a show without a purpose outside of milking our tear ducts, and that’s just not worth an hour of our life every week.

READ MORE: Twist Is Us: Every Twist From ‘This Is Us,” Ranked and Graded (A Running List) Original Review: “‘Timeless’ soon falls prey to an easily digestible episodic structure that — despite the best efforts of its cast — carries less charm, thrills and general fun than your average hour of ‘Chicago Whatever.'”

Where It Stands Now (Five Episodes): “Timeless” is essentially still the same show we got to know in the first two episodes. Sure, it’s ongoing conspiracy plots have been expanded, but weekly stories remain stuck between silly fun and real emotion. There’s well-captured moments of each, such as when the time-traveling trio’s actions resulted in a new James Bond film, and pretty much whenever Abigail Spencer goes through something tough. (She’s still the best, but better in “Rectify,” the better show.) But those scenes are too few and too far between. It’s time to cut the cord. “Man With a Plan”

Original Review: “Not only is the series uncomfortably dated and anti-equality, but it’s also criminally unfunny.”

Where It Stands Now (Three Episodes): We stand by our original assessment, as “Man With a Plan” has not had time to change, nor does it show any indication it plans to.

More shows not worth your time (or ours): “Kevin Can Wait,”

This Article is related to: Television and tagged Speechless, The Good Place, This Is Us, TV Reviews