A panel of TV critics weigh in on twists that packed a wallop. Did "Game of Thrones" make the cut? 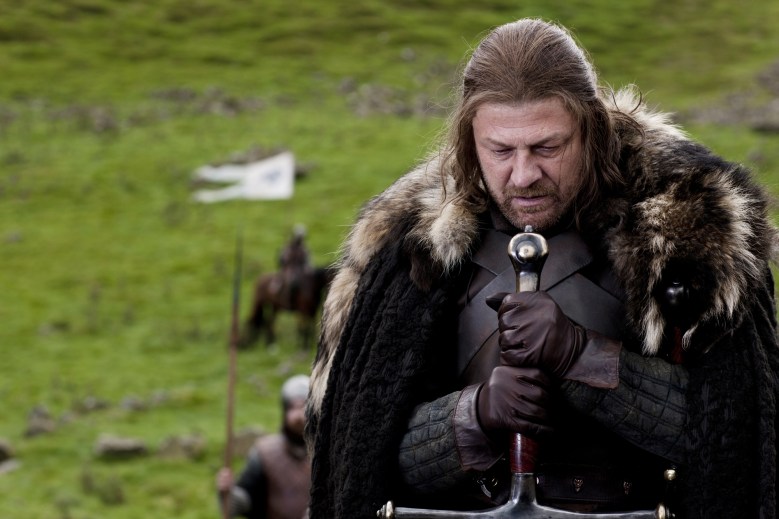 This week’s question: What is the most shocking TV twist of the 21st century and why? (Warning: Here be spoilers. Lots of them.)

The saintly Teri Bauer dying at Nina’s hands in the “24” first-season finale. That twofold trauma of loss and betrayal has given me such trust issues that I now suspect every person around Kiefer Sutherland’s President Tom Kirkman on “Designated Survivor” of being a mole. Except for the awful son who is too stupid to be evil. The most shockingly bad twist that still makes me want to burn my “Sandcastles in the Sand” cassingle was the reveal at the end of “How I Met Your Mother” that the mother we never really met for long or cared about had been dead all along.

I know that it happened in the books, but man, I still cannot believe they chopped Ned Stark’s head off. HBO had such a well-established tradition of shows built around white male patriarchs that Sean Bean being cast in “Game of Thrones” felt like the exact definition of job security. But perhaps the Sean Bean death curse could not be stopped, or (more likely) “Thrones” was determined to prove from the get-go that it wasn’t playing around. (A promise it’s delivered on several times over in ensuing seasons.) Point is, by killing the show’s ostensible protagonist, the show told us that no one was safe, and left us staggered in its wake. There’s an abundant supply of great 21st century twisty endings: “The Sopranos” ending; Norman Bates lying during the polygraph test in the Season 2 finale of “Bates Motel,” which led to Norma locking Norman in the basement to protect people in the Season 3 finale; and the excellent “Breaking Bad” Season 4 finale as Gus Fring walks out of Hector’s hospital room right after the bomb blast…and half of his face has been blown off.

I am going to throw you one I feel no TV critic will submit: The short-lived Cinemax masterpiece “The Knick” and its finale in Season 2, where Clive Owen’s Dr. Thackery self-surgery in a medical theater was a masterfully lensed visceral event that displayed Thack’s arrogance, fastidiousness, and ultimately his curiosity run amuck by his coke and heroin habit.

This, for me, was a riveting finale twist where Steven Soderbergh made us forget the highly implausible scenario of a doctor actually hacking at his bowels while other venerated doctors watched, letting him do so.

It fully immersed us into a horror theme as we witness Dr. Algernon Edwards (Andre Holland) in utter disbelief as Thack made cut after cut, ultimately understanding there was no going back as we watched him die on the table.

In the end it was never confirmed that Thack had died, and we never did get a Season 3, but for two glorious seasons this show had me wrapped up tight as a frog’s ass in flight.

So many not-so-shocking shocking twists, so little time. Wish I could think of one — beyond the did-my-cable-go-out ending to “The Sopranos” —  that didn’t involve killing off a major character, but such killings are a hallmark of 21st century drama. If not for the fact that I’d read the book and I knew it was coming, I might have said the beheading of Ned Stark in the first season of “Game of Thrones.” As it is, I’ll have to go with the death of Wallace (Michael B. Jordan) on “The Wire,” which still leaves me a little breathless, all these years later.

My favorite plot twist of the current century is Jack’s “we have to go back” plea from the last episode of “Lost’s” third season, a two-hour episode called “Through the Looking Glass.” In the episode, we see Matthew Fox’s Jack struggling with addiction and suicidal thoughts. For much of the end of the episode, we think we’re seeing one of the show’s many flashbacks to a time before the plane crash that stranded the characters on the mysterious island. But it isn’t until Jack has an emotional conversation with Evangeline Lilly’s Kate that the viewer realizes this isn’t a flashback at all – it’s a flash FORWARD to a future where some of our castaways had made it off the island. Most. Mindbending. Twist. Ever. Our discovery that Jack had escaped the island on “Lost.”  The moment we realized we were not watching a flashback was a gamechanger and grade-A mindfuck.

I suspect this will be a popular answer, but the end of Lost’s “Through the Looking Glass” still has me incredibly excited about it almost a decade later. I guessed the twist a couple of scenes before it aired — the sort of thing “Lost” constantly invited you to do — but in the best “Lost” fashion, it paid off just as much if you had figured it out as if you had not. Jack’s drunken, blubbering mess screaming, “We have to go back!” at Kate made the extra long wait between Season 3 and Season 4 (the first when the show debuted at midseason) that much tougher to bear, and it was the first time when I truly felt as if “Lost” really did know where it was going. Obviously, opinions on what the show did with its final three seasons… differ, but in that episode, in that moment, it felt like the show had reached a dizzying, impossible climax.

When Robert Durst appeared to admit his guilt on the finale of “The Jinx,” I leapt out of my chair. The handwritten letter, the hot mic, the burping … it was incredible television even before this, but it became even more so because it had real-world repercussions. Thrilling, horrifying, and unexpected, it showed that a documentary series could be beautifully produced, activist-oriented, and matter — Durst was arrested for Susan Berman’s murder. “Killed ’em all, of course.” Since they have finite end points, movies are often more destination-driven than TV, which tends to be more journey-driven. So twists-for-twists-sake usually work better in movies. Anyway… First off,  I’m eliminating any twist that was from source material, so sorry to Ned Stark and The Red Wedding. From there, the easy answer is when “Lost” reversed formula from flashbacks to flash-forwards with the “We have to go back” season-closer and that was unquestionably a jaw-dropper. But I feel like ordering off-menu: I love when great showrunners set themselves up with an absurd twist just to see if they can make it work and surely the introduction of a UFO in the first episode of the second season of “Fargo” counts. Noah Hawley wanted to make it clear that there are no rules bounding the “Fargo” universe and he made the UFO both a key thematic underpinning of the spectacular second season and also an important plot point. It wasn’t a twist that caused a gasp, but rather something that left me laughing at its audacity.

“Alias,” “The Telling” — Maybe because I was young and naïve way back in 2003, maybe I’m just jaded now by all the time-play, but few endings have left me slack-jawed for a good minute than “Alias’” Season 2 finale, when Sydney wakes up in Hong Kong to learn that two years have passed and Vaughn is married. The slow, anxiety-filled realization for Sydney — and us — was textbook control and execution in “show, don’t tell.” “Alias’” first two seasons were spy perfection, and this was a welcome jolt in the Rambaldi machine after the show blew up its entire premise midseason. Unfortunately, what followed was Season 3. And Lauren. Ugh.

If the question asked which twist was the most important to television, even I would be hard pressed not to bring up Ned Stark losing his head on “Game of Thrones.” So many shows have been inspired by the choice to kill off their de facto lead, it’s led to a no-holds-barred attitude toward the medium that’s been incorporated into major hits (like “The Walking Dead”) and series canceled too soon (like “Public Enemies”). Similarly, if the question was, “Which twist affected you the most?” I’d have to go with Kevin Garvey’s inspired arc during the later episodes of “The Leftovers” Season 2. That had my stomach churning, my heart pounding, and tears flowing — often all three at once.

*But* the question is what was the most shocking TV twist from the 21st Century, and to that, my answer has to be “Scott Tenorman Must Die,” the fourth episode of “South Park’s” fifth season that first aired in July 2001. Sparing you what gruesome details I can, Eric Cartman’s revenge plot against the titular high school freshman is diabolical to a degree previously unimagined on television or, really, anywhere, and it’s in the ultimate execution of his vengeance that the shocking twofold twist arrives. Cartman has to fail time and time again to get back at his bully in order to set the audience up for one more final failure. Instead, he succeeds, and the fourth grader’s master plot proves more shocking, scarring, and, yes, hilarious, than anything yet to follow this century. Bravo, Cartman. How disgusting.

This Article is related to: Television and tagged Criticwire Survey, Game of Thrones, Lost