Multi-hyphenate filmmaker Anna Biller used her unique vision and bold aesthetic to make a throwback that feel entirely fresh. Here's how she did it. 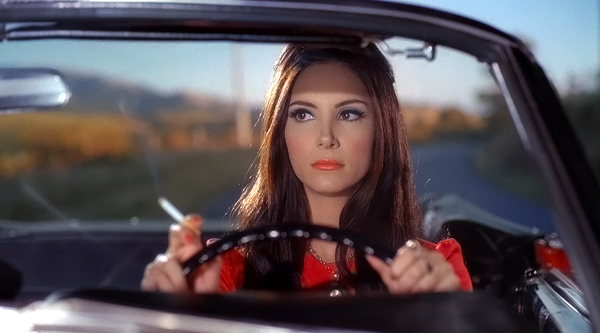 Say hello to your new obsession: A spellbinding homage to old pulp paperbacks and the Technicolor melodramas of the 1960s, Anna Biller’s “The Love Witch” is a throwback that’s told with a degree of perverse conviction and studied expertise that would make Quentin Tarantino blush. Shot in velvety 35mm and seen through the lens of a playfully violent female gaze, the film follows a beautiful, narcissistic young sorceress named Elaine (Samantha Robinson, unforgettable in a demented breakthrough performance) as she blows into a coastal Californian town in desperate search of a replacement for her recently murdered husband. Sex, death, Satanic rituals, God-level costume design, and cinema’s greatest tampon joke ensue, as Biller spins an archly funny — but also hyper-sincere — story about the true price of the patriarchy. There hasn’t been anything quite like it in decades.

As a filmmaker, Anna Biller is an obsessive. She holds a staggering 10 credits on “The Love Witch,” an homage to genres as diffuse as 1970s-era sexploitation films and 1960s-set Giallo features, starring breakout Samantha Robinson as Elaine, a young witch looking for love in all the wrong places. Driven by her desire to literally charm a man, Elaine’s powerful magic often backfires in spectacular fashion – love is a dangerous thing, especially when aided by stellar spell-casting – and the witty and wild feature tracks her story with both style and substance.

Biller’s aesthetic is unique and bold, and harkens back to the heyday of exploitation features with plenty of old Hollywood touches and deliciously feminist messaging. Pulpy, melodramatic, and totally badass, there’s nothing quite like “The Love Witch,” and it’s all Biller.

IndieWire recently sat down with Biller to talk about the long road to “The Love Witch” – only her second feature in a career that stretches back to the early nineties – and the hard lessons that reminded her just why it’s so important to stay true to your vision in an industry that doesn’t always value that kind of thinking.

For Biller, the debut of “Viva,” her first full-length feature film – which she directed, wrote, starred in, produced, edited and provided costumes, production design, art, animation and music for – was a major turning point in her career, establishing her unique point of view and dedication to doing things her way.

The film stars Biller herself as bored housewife Barbi, as she’s plunged into the wild times of sexual revolution-era Los Angeles. All trippy colors and generous nudity, it wasn’t just a calling card for her style, but an exploration of how the sexual revolution was often disappointing for women.

Critics didn’t get that.

“I was extremely angry after I finished ‘Viva,'” Biller said. “‘Viva’ got talked about like a copy or pastiche of a sexploitation films and not as something that maybe borrows a little bit from those films, but completely is different. I was really kind of horrified that nobody picked up on it.” Biller felt further victimized by critics and audiences who demeaned her looks. “I was personally objectified as a woman in a way that I hadn’t been since I was a teenager,” Biller said. “Comments I got on ‘Viva’ [were] like, the girl’s boobs weren’t big enough, and there wasn’t enough nudity, wasn’t shot right to show people’s asses well enough.”

Initially depressed by such criticisms, Biller turned her emotion into action. She realized making “Viva” led her to experience the same kind of discrimination, sexism, and misunderstanding that her film criticized.

“That fueled a lot of anger in me,” she said, “and [gave me] the desire to make a movie more about someone who wasn’t so passive as the character I played in ‘Viva.'”

Despite Biller’s anger over the reception to “Viva,” the filmmaker refused to allow bad criticisms to get in the way of good advice. She got back to basics, especially as it related to screenwriting. “I was really thinking a lot about how to create a film that wouldn’t be so misunderstood, that was a little more accessible,” she said. “So I thought, maybe part of that was learning the art of screenwriting a little bit better, because I thought the problems that people were having were partly because it was experimental in its structure.”

Biller relishes upending expectations, but she found new power by boning up on craft. “I think in some ways, the more conventional that I become with how I express things, the more clear the message is.” While her ideas remain radical, Biller wants to further hone their presentation.

“Screenwriting is really difficult, it’s one of the most difficult parts of making a movie, and it’s one of the most important parts,” she said. “I’m still studying screenwriting. I’m really trying to make more of a tighter, more like a movie that’s like a noir film. Where it’s not so languorous in terms of its visuals and such a visual tableau, but maybe a little more hinging on the performances and the script.”

Biller is a zealot for DIY filmmaking, but it takes a lot out of her — perhaps too much. For “The Love Witch,” the only thing Biller didn’t do is star, serving as director, screenwriter, producer and editor, in addition to providing music, production design, set design, art decoration, set decoration, and costume design.

“It’s just like hours and hours and days and weeks and months of just making stuff by hand,” Biller said. “That, for me, is the process, and it’s really fun, but sometimes I feel guilty spending so much time sewing and making props. I feel like I’m just the craft lady and I’m not really a filmmaker anymore.”

And yet Biller’s dedication to having her hands on everything seems to motivate her in a profound way: There’s no questioning that her films are her own.

“You do one thing at a time,” Biller said. “So I write the script, and then I draw, and I do storyboards, and I look for locations, and then I go scouting for furniture, go to all the rental houses and see what furniture’s available, what props are available.”

And if it wasn’t available, she made it.

“All the witchcraft altar props, I bought some and made some. And then you get the same process you have to do with the costumes. You just do one thing at a time. And then you go, ‘Okay, I don’t have paintings for the walls,’ you try to look for what paintings are available, there’s nothing, and you start painting…” Biller trailed off with a laugh.

She knows it sounds crazy. She’s working on it.

“It really took way too much time, much more time than I thought it would take,” the filmmaker said of her other duties. “It was outrageous how much time it took. We didn’t really have a pre-production budget for an art department, so that’s why I did it. I also like to have control, but if we’d had a budget, I would have had some more help and it could have gone faster.”

Biller admits real fondness for long scenes. “People are still complaining that the ritual scenes are too long,” she said. “But see, I love things like that. I’m almost kind of Warholian in that way. I love to see the whole ritual scene, like every single part of the liturgy, which is like half an hour long.”

That said, Biller understands the necessity of cutting her film down to a consumable length, even it meant sacrificing some of her favorite parts. Still, “The Love Witch” isn’t short; it clocks in at a solid two hours. (Biller also served as her own editor.)

Biller is hoping to include those scenes on a longer director’s cut, but she does seem appear to realize that the sort of stuff she loves to see might not always appeal to a wide audience. For someone as rigorously dedicated to making films in their own vision, it sounds like the kind of breakthrough that will only further push her to explore more conventional attitudes, even in the face of her often uncompromising originality. “The Love Witch” is being released just as the world contends with renewed questions about equality and sexism. Biller embraces that as a stroke of luck.

Biller said people initially approached her film as representing the past. “Like, ‘Gender roles in the past that are obsolete’ and, ‘This stuff doesn’t happen anymore’ and, ‘We don’t need feminism anymore because we’re post-feminist,’ to suddenly everybody realizing, ‘Holy shit, this is very real, it’s very current, and it’s happening right now.'”

On the screen, and in the world. It doesn’t get more radical than that.

“The Love Witch” is  currently playing in Los Angeles and New York.

This Article is related to: Film and tagged Anna Biller, Interviews, The Love Witch