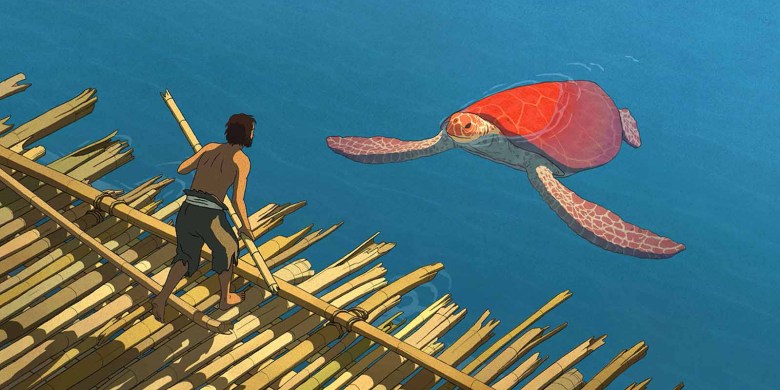 Cannes winner “The Red Turtle” (co-produced by Studio Ghibli) is arguably the most sublime animated Oscar contender. Michael Dudok de Wit, who directed the Academy Award-winning short, “Father and Daughter,” tells a 2D cycle of life story that “uses time to relate the absence of time, like music can enhance silence.”

A man shipwrecked on a lush tropical island inhabited by crabs, turtles and birds tries to escape by building and rebuilding a raft, continually wrecked by a mysterious red turtle, which transforms into a beautiful red-headed woman who becomes his companion and soul mate. Eventually, they have a son together.

READ MORE: ‘The Red Turtle’ Director Reveals How He Made Studio Ghibli’s New Film With No Dialogue

“The Red Turtle,” which opens its qualifying run November 18 and bears Studio Ghibli’s strong sense of color, philosophy and symbolism, was actually animated by Prima Linea in Paris and Angouleme. For animation director Jean-Christophe Lie, what makes it special is the link between a sleek design and a cycle of life story. “Purity and formal simplicity created an existential and universal story,” Lie recently told IndieWire.

For economic reasons, though, Lie introduced Dudok de Wit  to digital animation with TV Paint on Cintiq. “On ‘The Red Turtle,’ he hadn’t time to learn the software used for the animation on Cintiq,” he explained. “But that turned out to be a good thing. The director needs to have a global vision of the project and not get bogged down in correcting animation himself. We had great discussions about realistic animation.” The director told IndieWire that Lie was the ideal animation director. “His animation was excellent…his drawings were beautiful, his movements were strong and his acting had much charisma,” he said. “Secondly, as an animation director, he had a totally natural way of creating an easy, positive and mature ambience in the animation team.”

Overall, “The Red Turtle” takes Dudok de Wit’s signature light and shadow to a new level, achieving the lushness of the forest and the beauty of the clouds and ocean. “The background painters used photographs that Michael provided and they prepared a fantastic color board to guide each sequence’s changing light and colors,” Lie said.

The background painters used charcoal on paper as a starting point for each background, and then the result was scanned and worked in Photoshop and color added. “Julien De Man supervised and used, in the first instance, light directions based on Michael’s storyboard. The different times of day — night, morning, afternoon, twilight were very important because they composed the story and the life cycle,” Lie added.

For the naturalistic character animation, the director employed actors by shooting them on video to help the animators understand the kinds of movements and performances he desired. “When Michael shot the actors, he didn’t have time to edit the footage into the film with the right timing,” Lie said. “So the animators had to set the rhythm for the sequence.” “Each animator worked on a sequence composed of several scenes, and so had to animate those scenes at the same time to get the correct rhythm for the sequence,” he explained. “Sometimes it was not possible for us to film a reference for a scene. When I animated the man in the movie who was trapped underwater, or when the man falls from the raft, I used a breaststroke swimming documentary as reference.”

Each moment between the couple and their son or between the couple itself contained no dialogue. It was all about body language, which animation excels at. “When there was emotional acting concentrated in the face, it was very difficult to use video because actors played emotions with their eyes,” Lie said. “The design of eyes on the movie meant we used the body language — the tiny gesture of body, hands, faces and rhythm between the characters to create the emotion.”

However, the turtle shell proved very challenging, as objects are difficult to animate in 2D when it turns in perspective, so the turtle was animated in CG with 3ds Max from Autodesk. “To integrate a 3D turtle with 2D design, the turtle was given a unique texture, prepared in Photoshop,” he said. “The texture included the color of the turtle and the spots and pattern on the shell and body. The texture was integrated in Fusion compositing software with the line, light and shadow of the turtle to make up the whole.”

For a giant tidal wave (led by special effects supervisor Mouloud Oussid), the team used photo and video documentary reference and, per the director’s instructions, a special design was achieved defined by shadows and distinctive mass.

“All moments were challenging because each scene was very long,” Lie said. “On this movie, each scene told a story and each animator had to illustrate this story by the rhythm.”