"A Man Called Ove" has not only become the highest-grossing foreign-language movie of the year, but landed on the Oscar shortlist. Music Box Films also took 2014 release "Ida" all the way to a win. 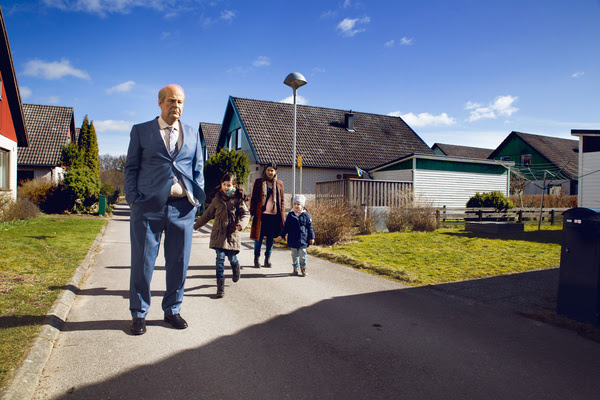 Edward Arentz is in a good mood. Earlier this year at the Berlin Film Festival, the Music Box Films managing director picked up a little Swedish comedy, “A Man Called Ove.” (That’s “oo-veh.”) No one else was much interested in the grumpy-old-man movie starring the original Wallander, Rolf Lassgård, which falls in the mold of Jack Nicholson’s “About Schmidt” or Clint Eastwood’s “Grand Torino” (without the guns).

But Arentz found himself crying, laughing, and deeply moved. And over the years he has learned to trust his gut. After all, he picked up U.S. rights to three other little Swedish films that became a worldwide phenomenon, “The Girl with a Dragon Tattoo” series ($22 million U.S. total). That experience paved the way for “A Man Called Ove.” At $3.3 million, it’s the highest-grossing foreign-language film of 2016, has landed on the foreign-language Oscar shortlist, and has a strong shot at a nomination. If it gets one — it also landed on the Academy’s hair and makeup shortlist this week — the crowdpleaser could win.

The Chicago-based Music Box is a partnership between exhibitor William Schopf and New York-based Arentz. Their careful selections of foreign-language films have consistently performed well over the past decade. “We don’t take on stuff we don’t like and believe in,” Arentz told me in a 2011 interview, “just to fill in a VOD quota. You’ve got to respond to what you like. Sometimes that can lead you places that can be lonely at times.”

Even with “Dragon Tattoo” grosses in the bank, Arentz said, “you can’t rest on your laurels very long. The tax man comes, a few mistakes, and you’re selling popcorn at a multiplex.” Arentz dipped his toe in the foreign-film Oscar race with Empire Pictures’ 2002 Oscar-nominated “Twilight Samurai,” which won an unprecedented 12 Japanese Academy Awards, but lost the Oscar to French-Canadian “Barbarian Invasions.” But the 2014 Polish black and white holocaust film “Ida” went all the way to the big win, and scored $3.8 million at the box office. This year, France overlooked François Ozon’s “Frantz” in favor of Paul Verhoeven’s “Elle” — which didn’t make the shortlist. “Frantz” will play at Sundance 2017.

So what did Music Box do right with “A Man Called Ove”? First off, Arentz asked Swedish film authorities not to repeat their 2010 mistake with “The Girl with the Dragon Tattoo”: Sweden failed to submit that title for the foreign-language Oscar. They listened.

Even with Sweden in the bag, Music Box decided not to wait for the usual fall festival strategy en route to awards season. Instead, they went out limited on September 30. That’s because the movie was based on the Fredrik Backman bestseller that is also the most successful Swedish book import since Stieg Larsson’s “Tattoo” trilogy. The property has already generated a successful stage production in Sweden and sold more than 2.8 million copies around the world with 1 million books in America and over 43 printings.

At Berlin, “I was in tears watching this film,” Arentz said. “The movie digs into several things, like, ‘Hey, don’t judge that jerky old neighbor too harshly.’ Ove could be the person you are having dinner with every night. You might look in the mirror and see a little bit of Ove. Women see aspects of their husband, father, or brothers. In a way, it has funny echoes of the American presidential election’s issues and frustrations. He isn’t a typical reactionary by any means, but Ove is somebody who feels like the world has changed around him.”

Front and center to the film’s homegrown and stateside success is 61-year-old Swedish TV, theater, and film star Rolf Lassgård, who starred in “Under the Sun,” directed by Swedish emigre Colin Nutley. Alexander Payne has also cast him in his first American film, the upcoming “Downsizing.”

In “Ove,” he portrays a grieving widower who loses his job and sees no point in living. He tries to kill himself, flashing back to his life and his beloved wife, but failing each time as he is interrupted by his neighbors. We can all relate to the pathos of the older guy who is alone and isolated and begins to get a little weird. Then someone reaches out to him, when he has given up on life, and pulls him out of his funk. I found myself blubbering and chuckling in equal measure.

For the U.S. debut of “Ove,” Music Box chose the Minneapolis-St. Paul International Film Festival, which boasts a huge Scandinavian-American audience. “It worked nicely,” said Arentz. “The film had a tremendous engagement in Minneapolis, where it outgrossed New York, which is unusual.” And after festivals in Seattle, Scottsdale, Traverse City, and Stonybrook, it scored in such cities as Madison, Wisconsin and St. Louis, Houston, and Orlando.

“It was so consistent,” said Arentz. “It would open in a modest range, but then hold or go up. Every engagement went up.”

That means the movie grew on strong word of mouth. And when other high-profile movies like “Birth of a Nation,” “American Pastoral,” and “American Honey” declined at the box office, arthouse exhibitors turned to “Ove.” And it just kept chugging along. (The DVD is available here.)

And no, Music Box did not have the hair-and-makeup Oscar campaign in mind. The candidates are Love Larson and Eva Von Bahr, the same team who did the makeup for last year’s surprise Swedish nomination, “The 100 Year Old Man Who Climbed Out the Window and Disappeared” (another Music Box title). They were nominated “for aging a character over many years,” said Arentz. “They’re deserving. They have advocates within the branch we had nothing to do with — it’s not part of some grand strategy.”

And “Ove” played well for the Academy foreign-language voters, too. Arentz just hopes that the final executive committee (10 in Los Angeles, 10 in New York, and 10 in London) doesn’t throw his baby out. That’s unlikely.