The director's newest entry into the "Alien" canon looks to be as scary and visceral as anything he's made yet. 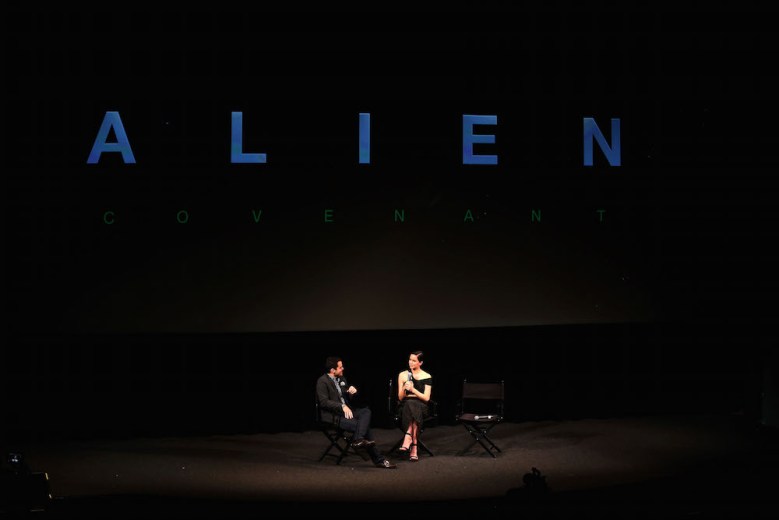 In space, no one can hear you scream, “Seriously? Why did we go back to space and touch a bunch of alien life forms and stomp around on an alien planet and think nothing bad would happen?” It’s “Alien,” and it’s back.

Earlier this month, 20th Century Fox rolled out a special showcase of sneak peeks of their upcoming 2017 slate for a group of New York City film journalists and critics, including a new look at Ridley Scott’s upcoming sequel “Alien: Covenant.”

While Scott was not on hand for the presentation — he sent in a video message bidding hello and hyping the performance of the film’s lead, Katherine Waterston — newly minted action star Waterston did appear to talk about the terrifying next chapter in the “Alien” mythos after the studio showed off three clips. This new “Alien” film takes places after the events of “Prometheus” and before the unfolding of the original series. Scott has made it clear that he hopes to make a brand new trilogy of films (in addition to hinting at the possibility of a fourth film) that lead into his original “Alien.” Like the original series, which starred Sigourney Weaver as beloved sci-fi action hero Ripley, this new series also hinges on strong female characters, including turns from Waterston, Amy Seimetz, Jussie Smollett, Carmen Ejogo and the apparent return of Noomi Rapace.

“People are talking a lot these days about the progress we’re making, or storytelling with great roles for women,” Waterston said during the event. “Maybe Ridley’s not getting enough credit. He’s been doing it for a very long time.”

She added, “I think his attitude about it is very similar to my own. It just seems obvious. There are a lot of cool, complicated women out there. It’s not rocket science.”

While “Prometheus” was lead by Rapace as archaeologist Elizabeth Shaw, “Covenant” boasts Waterston in its lead role, casting the “Fantastic Beasts and Where to Find Them” star as Daniels, a crew member of the Covenant. It came as little surprise then that part of the footage screened included something of a sizzle reel dedicated to showing off Waterston’s work in the film. It was a canny choice, especially because Waterston’s character was not at the center of either clip shown, both of which actually put the premium on another female star: Seimetz as one of the Covenant’s pilots. Per the film’s official synopsis, “Bound for a remote planet on the far side of the galaxy, the crew of the colony ship Covenant discovers what they think is an uncharted paradise, but is actually a dark, dangerous world — whose sole inhabitant is the ‘synthetic’ David (Michael Fassbender), survivor of the doomed Prometheus expedition.”

The first clip shown sees the crew of the Covenant making first landfall on this supposed “uncharted paradise,” with Seimetz piloting a shuttle from the main Covenant colony vessel, lead by Danny McBride as the ship’s pilot, to the surface of a seemingly familiar (well, to “Prometheus” fans) lush green planet. Although the clip was a short one, it was high on tension — the shuttle’s entry into the planet’s atmosphere is a rough one — and it made clear that the Covenant group is bonded (was McBride’s character freaking out during the tougher parts? you bet he was) and that Seimetz’s pilot is highly skilled. These things will matter later.

The real meat of the presentation was a nearly 10-minute scene that picks up after the shuttle crew has landed on the surface of their new planet. While McBride’s character and a skeleton crew are high above the planet in the main ship, at least two groups of shuttle-delivered crew members have gone out exploring, while Seimetz’s pilot character has stayed behind to mind the shuttle.

Despite the vibrant, welcoming nature of the planet, Seimetz’s character is roused into action by a distress call from one of the groups, who are desperately running back to the ship with an injured and ill member (while the scene appears to take place well into the film’s first act, we’ll be avoiding character and actor names, so to better curb the possibility of spoiling).

So what kind of ailment could a crew member possibly have on the face of such a lovely planet? If you’re thinking xenomorph, you’re almost there. As Seimetz becomes hip to the gravity of the situation, she frantically communicates both with the main ship (and a totally hysterical McBride) and the other exploratory party (who make mention of their own ill member, though they seem startlingly nonplussed by anything that’s befalling them). When the first group arrives back at the ship, it’s clear that their sick member is in dire condition.

As Seimetz and one other member of the group rush the sick member to the medical area of the ship, Seimetz soon realizes what she needs to do: Quarantine them. It’s a tough choice, but one that becomes clearly right as the sick member begins convulsing and spewing blood all over the room, his compatriots, everything.

Semeitz escapes, but she’s nearly beside herself with fear. That intensity only heightens as the group’s other member realizes what’s going on and begs Seimetz to let her out. It’s tense, scary, fast and the kind of scene that speaks to the terror that the “Alien” franchise can crank up on screen. While one might expect that this kind of footage screening would cut off just as whatever is in the sick dude’s body just starts to make its way out, showing itself to both his hysterical crewmates and the audience at large, Fox went for it, with a brand new alien creature popping right out off his back — that’s right, his back — and making his bloody, toothy presence known. He’s a neomorph, and he looks a hell of a lot like a classic chestburster, though darker in color and much, much faster.

As the neomorph tears through its first host, a totally undone Seimetz watches from behind a sealed door. She’s totally beside herself, but that’s to say nothing of the other member of the exploratory group who is trapped inside the med room with her now-dead compatriot and the terrifying alien lifeform. He lunges for her, and while she puts up quite a fight, she’s no match. And as forward-thinking and pragmatic as Seimetz’s character is, she isn’t either, as the neomorph eventually breaks through the door, chasing a sweaty, hysterical Seimetz through the ship.

And what about McBride? He’s hearing all of this over the radio, completely unable to do anything about it. And that other group? Well, they’re finally getting wise to the fact that something horrific is happening on the shuttle, and begin hustling back to it, with their very own ill crewmate in tow (along with returning star Michael Fassbender, who is reportedly also playing yet another android in the film, in addition to reprising his role as David).

By the time they get back to the shuttle, a frantic Seimetz has employed the assistance of guns and fire to kill of the neomorph, and while that’s a good idea in theory, it’s not one that works out for her, as she manages to blow up the entire shuttle just as the other group returns. Oops.

The footage concluded with a quick reel showing off Waterston taking charge as Daniels — similar in look and tone to earlier looks of the film — and a new trailer that relied heavily on much of the same footage shown in the first two clips. (You can check out the latest trailer below, which was just released.)

After the footage was shown, Waterston helped clarify not only Daniels’ place in the “Alien” galaxy, but also some finer points about her character.

“She has really good instincts, and she has a concern about where they are going on that ship,” Waterston explained. “She’s concerned about what they are doing. She’s questioning leadership there a little too, I think.”

She added, “You always wonder what kind of person you would be in an extreme crisis. Will you be a coward, or will you be courageous? And I think she’s just one of those people, who, if her kids were in a car that was on fire, she’d be able to lift up the car.” Like many of the characters in “Prometheus,” most of the characters of “Covenant” don’t include much in the way of military training, which helps account for so much of the terror and lack of preparation evidenced in the presentation’s final clip. Waterston sounded off on that, too.

“They’re colonists. They’re scientists,” she said. “They’re not military experts or anything. They are all civilians. There are some military dudes around to protect us, but most of the — I don’t know if I’m supposed to say this, but I’m gonna say it anyway — most of the people on the ship are couples. Then there are all of these colonists who are in a kind of a cryosleep.” Sounds safe!