From "American Crime Story" to "Veep," 2016 honorably extended the golden age of television. These are the best shows of an exceptional year. 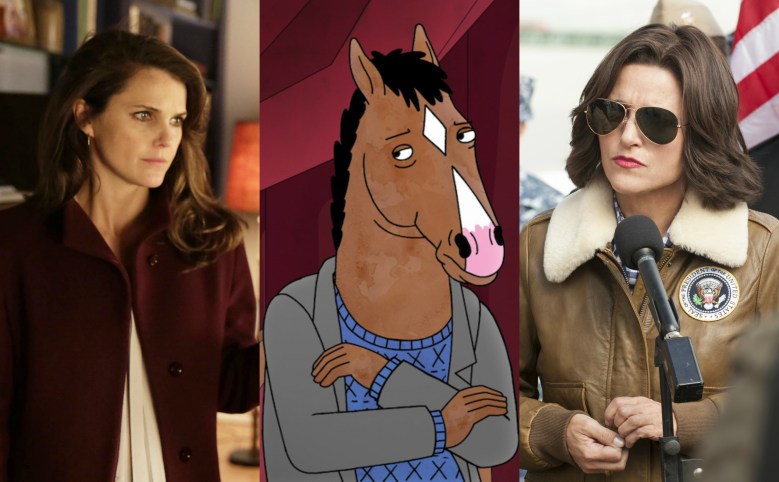 In its second season, Sam Esmail’s hacker drama took some big swings and succeeded in bringing some of the most challenging and daring filmmaking of 2016 to the small screen. From staggering shocks to a descent into multi-camera madness co-starring Alf, there were moments of “Mr. Robot” we confess we saw coming. But there was so much going on underneath the surface that we couldn’t look away. Amazon’s enchanting Brit-com made a leap by unexpectedly fast-forwarding the story of Rob and Sharon, the couple who decided to make a commitment after a week of passion led to unplanned parenthood. In the show’s second season, their turbulent relationship has settled into a pattern for the comfortably married, which has fueled a creative resurgence in storytelling. They are more mature, the issues they face are different and there’s more at stake, including the viewers’ investment in Rob and Sharon’s happiness. “Catastrophe” made everything just that much stronger the second time around, and remains the epitome of how a short six-episode season can still pack an emotional punch. There is simply no other series on television as successful in its engagement with existential quandaries as Ray McKinnon’s melancholic masterpiece. Directly applied to life and family, Daniel Holden’s mental escapades take enticingly literal shape in his day-to-day, minute-by-minute activities, even when he’s spending hours alone in the middle of a gorgeous Georgian field. More specifically to 2016, McKinnon’s final season seems right on track to conclude in a way befitting its distinct nature. While always impeccably paced and filled with performances perfectly in tune with the show’s individual tone, Season 4 is moving steadily toward the fleeting finality found in life; in other words, it’s intent on providing answers to the unanswerable questions that matter to our characters in a way in which both they and we can find closure. “Atlanta” is a beautiful and dreamy series, and yet it’s also the most direct in that it taps straight into Donald Glover’s psyche. His intent to capture what it feels like to be black in Atlanta is a meandering and sometimes metaphorical look at this experience, which can be dangerous and frightening but also occasionally sweet and bizarre. While race plays a big part in the series’ themes, Glover’s debut as a TV creator also shines a light on thwarted ambition, co-parenting, success, and self-expression. What happens isn’t as important as how it happens and how we feel when watching it. It’s a stunning first foray into Glover’s own show, and he and his team — including brother Stephen Glover and director Hiro Murai — deserve all the praise. If you don’t learn from history than you’re doomed to repeat it. While we haven’t seen a case quite like the O.J. Simpson trial since the mid-’90s, writers Scott Alexander and Larry Karaszewski recognized the fateful court case held lessons wholly applicable to modern society. Moreover, the duo — along with a team of talented directors including John Singleton and Ryan Murphy — were able to craft fresh perspectives out of characters we all would’ve felt overfamiliar with prior to “The People v. O.J. Simpson,” all while building drama leading up to an ending we all definitely knew was coming.

It was a huge risk, especially when you consider Murphy’s track record for hugely ambitious projects that fall apart before the final episode. Yet thanks largely to the steady hands of its writers, “American Crime Story” brought us an engaging, engrossing take on an event we might have thought we understood — only to find that there was so much more to learn. These 10 episodes marked 2016’s most pleasant surprise; when Season 2 hits, we’ll be better prepared. Nonchalantly stabbing your husband. Finding sexual release adjacent to a rotisserie-d varmint. Keeping the death of your partner’s dad from him in hopes he’ll first buy you tickets to the Famous Pets of Instagram Cruise. Through the actions of its thoroughly reprehensible but ultimately lovable characters, “You’re the Worst” continues to be one of the most outrageous and hilarious comedies on TV.

But what really sets it apart in its third season is its ability to consistently take risks and never settle. Take, for example, the show’s decision to bid adieu to its popular Sunday Funday tradition, or devoting an entire episode to Edgar in a moving but unflinching look at his PTSD. The four main characters also experienced significant, life-changing character arcs, accomplishing things we never thought we’d see (even when we always knew they could). The reversals of fortune in the finale — and the expectations that went along with them — were heartbreaking, realistic and still note-perfect. We can’t wait to see what “You’re the Worst” comes up with next.

READ MORE: ‘You’re the Worst’: Why Sunday Funday Had to End, According to Aya Cash, Kether Donohue and Stephen Falk The beauty of what Vince Gilligan and Peter Gould have built with their “Breaking Bad” prequel can be found entirely in its details, which bring a richness to the world and characters we’ve gotten to know so intimately over the first two seasons. In Season 2, “Saul” found a new depth to the drama, making the seemingly mundane as exciting and terrifying as the most high-stakes action-adventure. We know where, eventually, Jimmy McGill ends up, but the journey has us hooked.

Read on for IndieWire’s Top 3 shows and the runners-up that just missed the cut.

This Article is related to: Television and tagged Bojack Horseman, Lists, Veep, Year in Review 2016