Just don't ask him how many people watch "Masters of None." 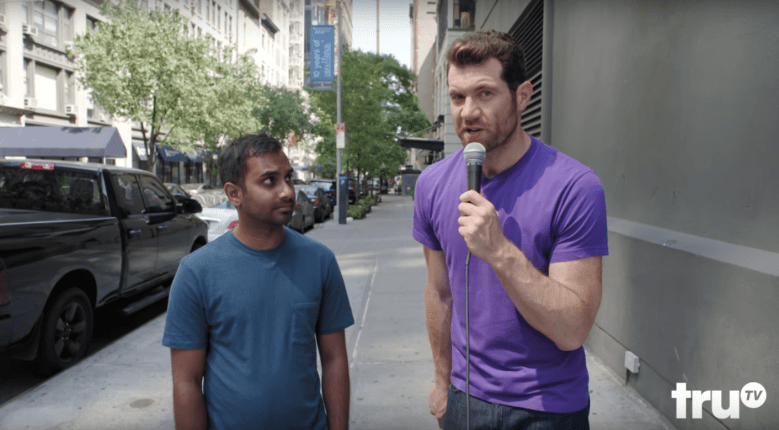 A much-deserved and hard-earned slow climb to show biz success, Billy Eichner’s brand of in your face comedy is like nothing else on TV. Starting out as YouTube sketches he would play during his stand-up sets, Eichner’s street persona turns the citizens of New York into proverbial human punching bags to delightful ends. Though recent success has brought him A-list celebrity sidekicks such as Julianne Moore and Lupita Nyong’o, Eichner is just as funny now as he was trolling the Chelsea queens by his lonesome.

Billy Eichner is back on the street for the fifth season of his web series-turned-actual show, and in his latest clip he’s brought Aziz Ansari with him. The topic of conversation: the golden age of television, which Eichner and the “Master of None” creator/star loudly tell passersby about on the streets of New York. Watch the latest “Billy on the Street” clip below.

The two are, of course, met with a range of reactions: One woman simply says, “Okay, bye,” in an effort to remove herself from the situation, while another insists, “TV’s horrible,” and that she prefers books. Ansari asks yet another woman whether she’s seen “The Leftovers,” explaining that “Season 1’s pretty good, but Season 2’s supposed to be extraordinary.” (He’s right!)

Also discussed: Constance Zimmer on “UnREAL,” how every episode of “Fargo” is a self-contained story and Netflix’s secrecy regarding ratings. “This is the golden age of television,” Eichner says about this last point. “It doesn’t matter if anyone is watching it!”

This Article is related to: Television and tagged Aziz Ansari, Billy Eichner, Billy on the Street