Kate McKinnon and Leslie Jones also joined in on the conversation. 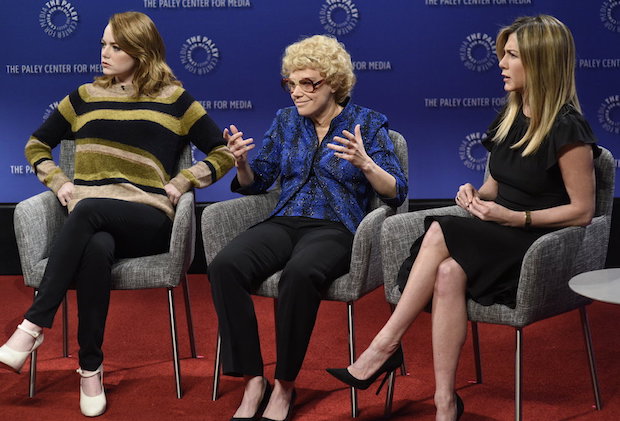 The gag parodied industry panels, and was even set at the Paley Center for Media (although Paley is better known for TV, rather than film, events). Stone, Aniston and Jones played themselves in a sketch where they took part in a panel called “Big Parts, Small Actresses: The State of Gender Equality in Film.”

The kicker: Kate McKinnon appeared as her character Dabette Goldry, taking the women back to her days as an actress and revealing inappropriate tidbits about her past.

The first question that was asked was, “What is still holding women back?” Emma replied by saying “I think there are all these tiny little things,” with Goldry talking about eating arsenic to “make your skin glow.”

When the topic turned to Aniston directing and moving behind the camera, Goldry was surprised that she would take on that role and stated, “How could that possibly work? Oh I see, your husband comes to set dressed up as a plant and whispers the ideas, got it,” she said to the “Friends” actress.

It was a bit of a reminder that although gender equality has a way to go in Hollywood, women have made great strides over the years when it comes to representation in the biz. Check out the full Q&A below.