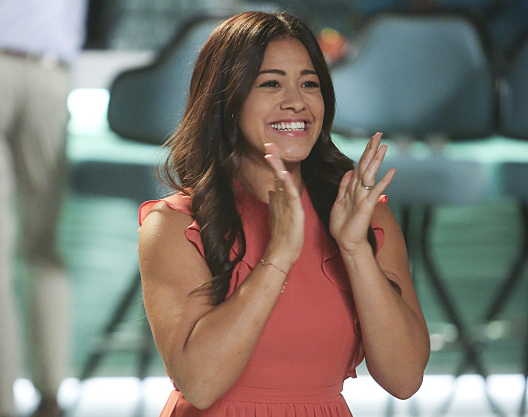 LAST WEEK’S PODCAST: Michael Showalter on the Origins of ‘Search Party’ and Status of ‘Wet Hot American Summer’ – IndieWire’s TURN IT ON Podcast

Gina Rodriguez is the kind of person who doesn’t take her celebrity for granted.

The “Jane the Virgin” star has leveraged her star power to help launch the “Young Women’s Honors,” which celebrates everyday women who are making a difference in various fields such as science, education, the environment, philanthropy and technology.

The event took place on Saturday Nov. 19, and a few more big names joined her for the cause: Laverne Cox, Katie Holmes, Jenna Dewan Tatum, Tatiana Maslany, Mayim Bialik, Victoria Justice and Lily Singh, among others. It will air Dec. 19 on The CW.

IndieWire’s TURN IT ON recently talked to Rodriguez about creating the show, which she hosts and serves as executive producer, as well as the importance of keeping up advocacy as Donald Trump takes over the White House.

“Women have been under attack during the past year during this campaign,” she said. “Even having Hillary Clinton as a candidate did open eyes to the gender roles in society, and how women are capable of anything. I want to continue that notion regardless of who our president-elect is.”

Among the issues Rodriguez is passionate about: “We have yet to handle immigration reform in a way that’s civil. We have yet to handle undocumented children, dreamers, in a way that is civil and humane.we have yet to have equal pay for women. There are things even prior to this election lots of women have been fighting for and will continue to fight for. That is still the state of our country. The only thing is that fight becomes more important when those rights are taken away.”

Also on this episode: Brian Huskey looks like an everyman, but his comedy is anything but average. Huskey is behind the new Adult Swim special “Mr. Neighbor’s House,” which might be described as Mr. Rogers on meth. And we say farewell to TV legend Grant Tinker.

IndieWire’s “TURN IT ON with Michael Schneider” is a weekly dive into what’s new and what’s now in TV – no matter what you’re watching or where you’re watching it. Each episode features interviews with producers, reviews, essays on the latest buzz and trends, plus a roundup of what’s premiering and what’s returning over the coming week. With an enormous amount of choices overwhelming even the most sophisticated viewer, “TURN IT ON” is a must-listen for TV fans looking to make sense of what to watch and where to watch it.

This Article is related to: Television and tagged Gina Rodriguez, Jane the Virgin, Podcasts, Turn It On