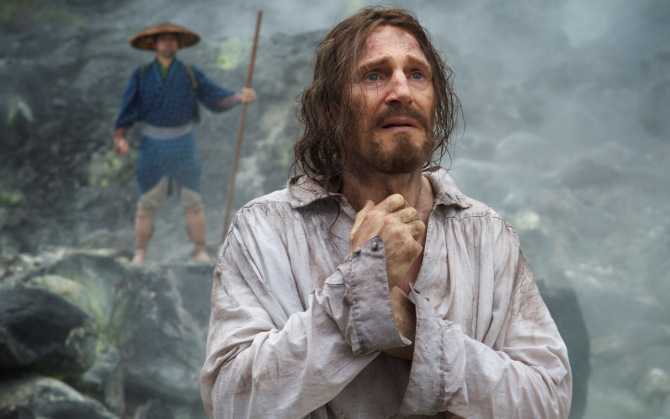 More than 25 years after first becoming interested in adapting Shūsaku Endō’s “Silence,” Martin Scorsese has finally completed his passion project. The first reviews are in, and so far they’re all positive — if sometimes muted. IndieWire’s Eric Kohn gives the film starring Andrew Garfield, Adam Driver and Liam Neeson a B, saying that, while it’s “by no means a masterwork,” it is a “haunting, immersive experience that, were it not for a handful of flaws, would rank among the director’s grandest epics.”

Peter Debruge of Variety is similarly subdued in his praise:

Whereas Endō’s novel allows omniscient access to Rodrigues’ deep internal conflict, the film leaves audiences at arm’s length, forcing us to scrutinize Garfield’s face for psychological insights that, for most, are too complex to expect us to interpret on our own.

It’s an invitingly austere movie, designed for both searching believers and curious others. The film can be cinematically rigorous, but it’s never ritualistically flashy.

READ MORE: Adam Driver On Filming Martin Scorsese’s ‘Silence’: ‘I Don’t Think I’ve Ever Taken It To The Extreme Before’

Robbie Collin‘s five-star Telegraph review is among the most enthusiastic:

It’s the kind of work a great filmmaker can only pull off with a lifetime’s accrued expertise behind him. And its representation of death as something faced alone, no matter which collective causes your life may have stood for, gives it a capital-Fs Final Film air that is itself spiritually bracing (though Scorsese is reportedly poised to shoot his 25th, ‘The Irishman,’ in February).

Screen International’s Tim Grierson is respectful, if not reverential:

Those willing to go along on Martin Scorsese’s arduous journey will find themselves eventually rewarded by a drama that plays out like an anguished summation of the 74-year-old filmmaker’s career-long obsession with the inherent paradoxes of living spiritually in a world beset with earthly temptations.

Another five-star review from Joshua Rothkopf of Time Out New York:

Scorsese has hit the rare heights of Ingmar Bergman and Carl Theodor Dreyer, artists who found in religion a battleground that often left the strongest in tatters, compromised and ruined. It’s a movie desperately needed at a moment when bluster must yield to self-reflection

“Silence,” which opens on December 23, currently boasts a 100% on Rotten Tomatoes and a Metascore of 84.

This Article is related to: Film and tagged Martin Scorsese, Review Roundup, Silence