"Rogue One" has prompted speculation about a certain onscreen duo. 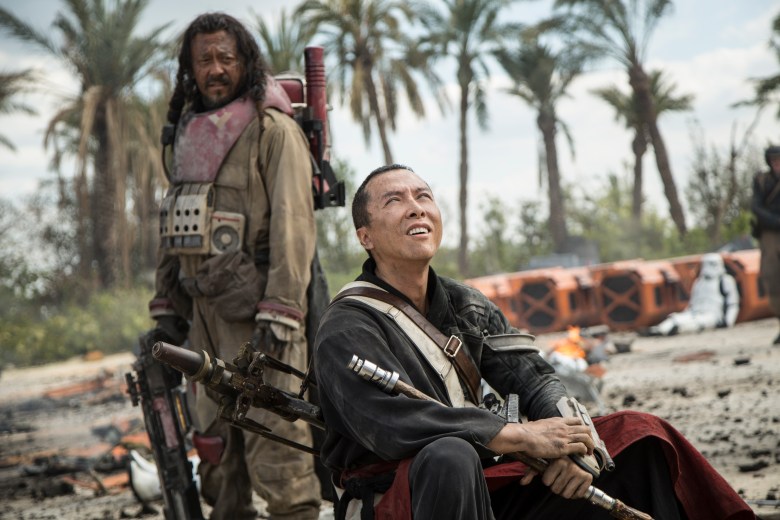 [Editor’s note: This post contains spoilers for “Rogue One.”]

Pixar quietly included its first gay couple in a blink-and-you’ll-miss-it scene in “Finding Dory” earlier this year, and now speculation has begun that another Disney-owned property has followed suit. Chirrut Îmwe (Donnie Yen) and Baze Malbus (Jiang Wen) of “Rogue One” are receiving the are-they-or-aren’t-they treatment online, namely from Vulture’s Kyle Buchanan.

Among the evidence put forth: the duo’s “old-married-couple vibe,” a moment in which “Baze tells Chirrut that he doesn’t need the Force if he’s got him” and the two characters’ deaths, which occur just moments apart from one another.

“As Chirrut expires,” notes Buchanan in his assessment of the latest “Star Wars” story, “it’s clear that Baze does not want to live in a world without this man. He charges almost suicidally into battle, firing at Stormtroopers while repeating Chirrut’s mantra over and over — finally, at the end of his life, paying tribute to his partner’s guiding philosophy — until he, too, is felled.”

Buchanan notes that movies are often coy in their depiction of homosexual characters, hinting at such unions rather than making them explicit. J.J. Abrams, who directed last year’s “The Force Awakens,” confirmed that there were indeed gay characters long ago in a galaxy far, far away; “it seems insanely narrow-minded and counterintuitive to say that there wouldn’t be a homosexual character in that world,” he said earlier this year.

And indeed, Chirrut and Baze aren’t the first from the latest incarnation of “Star Wars” to prompt speculation — many have wondered the same about Poe (Oscar Isaac) and Finn (John Boyega).

This Article is related to: Film and tagged Rogue One, Rogue One: A Star Wars Story, Star Wars